Bette Davis was one of Hollywood's greatest actresses. In her sixty-year career in films she won two Best Actress Academy Awards and was a finalist for eight others.

Ruth Elizabeth Davis was born in Lowell, Massachusetts, on April 5, 1908, the eldest daughter of Harlow Morrell Davis, a lawyer, and Ruth Favor Davis. She was called Bette as a child and kept the name throughout her career. After her parents divorced in 1916, she and her sister, Barbara, moved frequently throughout New England with their mother, who was pursuing a photography career. Both girls attended boarding school in the Berkshires and went to high school in Newton, Massachusetts. Bette started acting in plays and taking drama classes while she was in school. She graduated from Cushing Academy, in Ashburnham, Massachusetts, with an idea that she might try acting. But she received little encouragement, as she was not considered very beautiful. She had made up her mind, though, and she headed for New York City.

Davis enrolled in John Murray Anderson's drama school and found some work with George Cukor's acting company in Rochester, New York. She also worked at the Cape Playhouse in Dennis, Massachusetts, as an usherette (a female guide who escorts people to correct seats in theaters or in other events) and a bit-part player. Her first major role was in a stage production of The Earth Between (1928). After a brief tour in The Wild Duck, Davis reached Broadway. The comedy 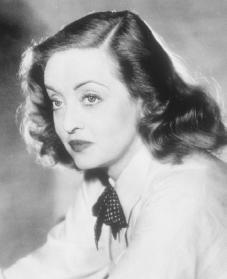 Bette Davis.
Reproduced by permission of
AP/Wide World Photos
.
Broken Dishes opened in November 1929 and ran for six months. That led to a 1930 production of Solid South, after which she failed a screen test in Hollywood.

Davis was also tested at Universal Studios and hired, even though studio executives were not very supportive. She appeared in two films in 1931, Bad Sister and Seed. The critics ignored her in both. Davis got a break when she was offered a part in The Man Who Played God. She received good reviews and a long-term contract from the Warner Brothers studio. This began a series of films with Warner, mostly unremarkable and insignificant, but critics began to notice Davis's talent and unique quality. Davis began to claw her way to the top of the film world. She fought for and won the right to appear in another studio's production of Of Human Bondage. Suddenly, the world was introduced to a brilliant new actress.

Warner continued to cast Davis in poor-quality films, with two exceptions. Playing a failed actress who tries to murder her husband in Dangerous, she won her first Best Actress Academy Award in 1935. She also appeared with Humphrey Bogart (1899–1957) and Leslie Howard in The Petrified Forest in 1936. Growing disgusted with the studio's offerings, Davis refused any more roles. The studio suspended her. She sued, which shocked the movie world. Although Davis lost her battle in court, Warner Brothers apparently got the message—they paid her legal fees and began offering her better roles. Her performance in Jezebel (1938) won her a second Academy Award.

By the end of the 1940s, Davis's career seemed to be slowing down. But she came through with a great performance in All About Eve (1950), winning the New York Film Critics best actress of the year award. After a number of films in the 1950s, Davis's career seemed to slow down again. But in 1962, Davis appeared in the smash hit Whatever Happened to Baby Jane?, acting opposite Joan Crawford (1904–1977). This was followed by Hush, Hush, Sweet Charlotte in 1965.

During the 1970s and 1980s, Davis continued to appear in films, mainly on television. She also appeared on many talk shows, delighting her audiences by her refusal to give in to old age. She was the fifth person to receive the American Film Institute's Life Achievement Award in 1977 and the first woman to be so honored. In 1979 she won an Emmy Award for Strangers: The Story of a Mother and Daughter.

Davis wrote two books about her own life, The Lonely Life (1962) and This 'N That (1987) (the second of which answered charges by her daughter that Davis was an alcoholic who had abused her children). She was also married four times. In the last five years of her life, Davis suffered from cancer and had several strokes. She died on October 6, 1989, in Neuilly-sur-Seine, France. She had just attended the San Sebastian Film Festival in Spain, where she had been honored for a lifetime of film achievement. In 1997 her son Michael created the Bette Davis Foundation. A year later he awarded American actress Meryl Streep (1949–) the first ever Bette Davis Lifetime Achievement Award.

Bette Davis is or should I say was one of my favorite actress's. I loved the rules she played. One of my favorite- What Ever Happened to Baby Jane. I purchased many of her films and still watch them. I also liked Human Bondage. I just discovered she had written 2 books. I will purchase them.
2
Cheryl Smith

I enjoyed it very much! I want to buy her books now especially, the one her assistant wrote. I have adored her movies. I guess what I liked about Bette, she was real! What you saw, was what ya got! I thought she was a great actress!!