In The Origin of Species the English naturalist Charles Darwin outlined the theory of natural selection, or "survival of the fittest," as the explanation for the changing of living beings over time.

Charles Robert Darwin was born on February 12, 1809, in Shrewsbury, England, the fifth child of Robert and Susannah Darwin. His father was a successful doctor, as was his grandfather, Erasmus Darwin, who had a great influence on Charles's later theories. His mother, who was the daughter of the famous pottery maker Josiah Wedgwood (1730–1795), died when Charles was eight. His sisters then raised him. At the age of nine Charles entered Shrewsbury School. He was not a very good student.

In 1825 Darwin went to Edinburgh University in Scotland to study medicine, but he soon realized that he was unable to even watch an operation being performed. In 1828 he entered Christ's College, Cambridge, England, to become a minister. He soon gave up that idea also, but he continued to study. He attended John Stevens Henslow's course in botany (the study of plants), started a collection of beetles that became famous, and read widely. He received his bachelor's degree in 1831.

Voyage of the Beagle

On Henslow's recommendation Darwin was offered the position of naturalist for the second voyage of H. M. S. Beagle to survey the coast of South America. The Beagle left in December 1831 and returned in October 1836. During the voyage Darwin studied many different plants and animals and collected many specimens, concentrating on location and habits. Darwin was influenced in his Beagle studies by scientist Charles Lyell's Principles of Geology (1830–33), which stated that present conditions and processes were clues to the Earth's past history.

Darwin noticed on the trip that certain types of organisms existed only in certain areas and that many organisms had gone through changes that made it easier for them to survive in certain environments. For example, he studied a type of bird called a finch and realized that there were over a dozen different kinds. The size and shape of the beaks of these birds differed depending on what kind of food was available in the area each lived in.

Darwin's Journal of Researches was published in 1839. With the help of a government grant to cover the cost of the illustrations, the Zoology of the Voyage of the Beagle was published in five volumes from 1839 to 1843. A number of scientists wrote articles on fossils (the preserved remains of creatures from an earlier age), living mammals, birds, fish, and reptiles. Darwin edited the work. He contributed information on the habits and ranges of the animals and made notes on the fossils. He also published The Structure and Distribution of Coral Reefs (1842), for he had studied the coral reefs in the Cocos Islands during the Beagle voyage.

Development of ideas on evolution

In 1842 and 1844 Darwin wrote short accounts of his views on evolution (change and improvement over time). However, the publication of other related works around the same time caused great controversy (dispute) and criticism of the authors, and Darwin decided the time was not yet right for him to enter the argument. He decided to wait and do more research. Darwin studied the practices of pigeon breeders, he conducted experiments on differences in plants and animals over time, and he worried about the problem of plant and animal transport across land and water barriers—for he believed in the importance of isolation for the creation of new species.

In May 1856 Lyell heard of Darwin's ideas and urged him to write an account with full references. Darwin sent a chapter to Lyell and Sir Joseph Hooker, who were deeply impressed. In June 1858, when Darwin was 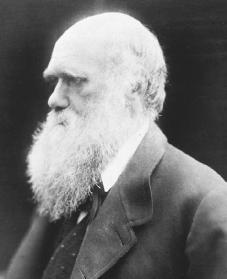 Charles Darwin.
Courtesy of the
Library of Congress
.
halfway through his writing, he received an essay from another naturalist, Alfred Russel Wallace (1823–1913), containing the theory of evolution by natural selection—the same theory Darwin was working on. Lyell and Hooker arranged for a reading of a combined paper by Wallace and Darwin, and it was presented at a meeting of the Linnaean Society in London, England, on July 1. The paper had little effect.

In November 1859 Darwin published On the Origin of Species by Means of Natural Selection, or the Preservation of Favoured Races in the Struggle for Life. His basic idea was that in the struggle to survive, some organisms adapt better than others to their surroundings, and when these survivors give birth they pass their traits on to their offspring, causing species to evolve. An English philosopher (seeker of wisdom) named Herbert Spencer created the phrase "survival of the fittest" to describe this idea.

The publication of Darwin's book brought worldwide attention to his theory and created heated dispute. Darwin was aware of all the criticism he received and tried to answer it in the additional five editions of Origin that were produced during his lifetime. In these editions he wanted to avoid trouble and wound up making several changes; this weakened his presentation and made him seem unsure of his views. The first edition is easily the best.

In On the Various Contrivances by Which British and Foreign Orchids Are Fertilised by Insects (1862), Darwin showed how the survival of an organism may be dependent on seemingly unimportant qualities. It became hard to say what is "useless" in nature. In The Variation of Animals and Plants under Domestication (1868), he expanded on a topic he had introduced in Origin. With The Descent of Man and Selection in Relation to Sex (1871) Darwin caused another uproar by suggesting that humans and apes both could be traced to a common ancestor.

Darwin became increasingly interested in plants, especially since he had his son Francis to help with the work. Papers Darwin had published in 1864 were collected into The Movements and Habits of Climbing Plants (1875), and these ideas were further explained and published as The Power of Movement in Plants (1880). Darwin's last work returned to observations he had made in 1837: The Formation of Vegetable Mould through the Action of Worms, with Observations on Their Habits (1881).

Darwin had married Emma Wedgwood, his first cousin, in 1839. Four of their sons became prominent scientists. He died on April 19, 1882, and was buried in Westminster Abbey.