A jazz trumpeter, composer, and small-band leader, Miles Davis was the leading jazz musician for more than two decades. His legend continued to grow even after poor health and diminished creativity removed him from jazz royalty.

Miles Dewey Davis III was born to Miles Davis Jr. and Cleota Henry in Alton, Illinois, on May 25, 1926. There were also two other children, an older sister and a younger brother. In 1928 the family moved to East St. Louis, Illinois, where Davis's father became a successful oral surgeon. Davis enjoyed a comfortable childhood and the family lived in a white neighborhood. At the age of thirteen his father gave him a trumpet and soon Davis joined his high school band. While still in high school he met and was coached by his earliest idol, the great St. Louis trumpeter Clark Terry (1920–).

After fathering two children by a woman friend, Davis moved to New York City in 1944. He worked for just two weeks in the talent-packed Billy Eckstine Band, then enrolled in the Juilliard School of Music. By day he studied classical music, and by night he gained experience in jazz's newest movement, bebop, with the leaders of the movement, notably Charlie Parker (1920–1955), Dizzy Gillespie (1917–1993), Fats Navarro, and Max Roach (1924–). 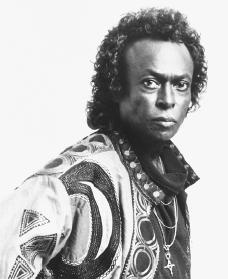 Davis's stint from 1947 to 1948 in a quintet (group of five musicians) led by bebop genius Charlie Parker brought him early fame. A fine bebop trumpeter, Davis soon felt a need to rid his music of bebop's style and to restore jazz's more melodic elements. The result was the influential recording Birth of the Cool (1949), which gave "birth" to the so-called "cool," or West Coast, jazz school. This recording established Davis' musical identity, separate from Parker and the other beboppers.

In the early 1950s Davis became a heroin (dangerous drug made from morphine) addict. His career came to a near halt for three years, but his ultimately successful fight against the drug habit in 1954 led to his greatest period: the mid-to-late 1950s. During that six-year span he made a series of small group recordings regarded as jazz classics. In 1954, with tenor saxophone titan Sonny Rollins (1930–), he made memorable recordings of three Rollins originals—"Airegin," "Doxy," and "Oleo"—as well as two brilliant versions of the Tin Pan Alley (a respected group of musicians and songwriters) standard "But Not for Me."

In 1955 Davis formed his most celebrated group, a remarkably talented quintet that featured tenor saxophonist John Coltrane (1926–1967), pianist Red Garland, bassist Paul Chambers, and drummer Philly Joe Jones. Until Coltrane left in the 1960s, Davis's band was the single most visible and dominant group in all of jazz. In 1964 he put together a new band, and Davis continued to be the greatest attraction (and biggest money-maker) in all of jazz. His new band, however, could not match the impossibly high standards of the original band.

For the last two decades of Davis's career he became more of a jazz curiosity than a musician to be taken seriously. A good part of his fame owed less to his considerable musicianship than to his strange personality. Davis gained a poor reputation in performance for turning his back on audiences, for expressing racial hostility toward whites, for dressing poorly early in his career and wildly later—all of which contributed to his mysterious image.

Davis was a complex man with strengths and weaknesses that would ultimately destroy him. Himself the victim of a policeman's clubbing (reportedly, racially inspired), he had the fairness and courage in the late 1950s to challenge black jazzmen's expectations by filling a piano vacancy with a white player, Bill Evans (1929–1980); but then, by all accounts, Davis often racially taunted him. A physical fitness enthusiast (with his own private gym), he nevertheless took vast amounts of drugs (sometimes, but not always, for pain). Oftentimes unfriendly, he was also capable of acts of generosity toward struggling musicians, both black and white.

Davis was married three times—to dancer Frances Taylor, singer Betty Mabry, and actress Cicely Tyson. All three marriages ended in divorce. He had, in all, three sons, a daughter, and seven grandchildren. He died on September 28, 1991, in Santa Monica, California, of pneumonia, respiratory failure, and a stroke.

Davis remains one of the most influential musicians in the history of jazz. His music lives on in recordings like Miles Ahead (1957), Porgy and Bess (1958), and Sketches of Spain (1960), and the hauntingly "blue" sound of his trumpet.

Davis's stint from 1947 to 1948 in a quintet (group of five musicians) led by bebop genius Charlie Parker brought him early fame. A fine bebop trumpeter, Davis soon felt a need to rid his music of bebop's style and to restore jazz's more melodic elements. The result was the influential recording Birth of the Cool (1949), which gave "birth" to the so-called "cool," or West Coast, jazz school. This recording established Davis' musical identity, separate from Parker and the other beboppers