Anders Celsius was born in Uppsala, Sweden, on November 27, 1701. The son of an astronomy professor and the grandson of a mathematician and an astronomer, Celsius chose a life in the world of academics. He studied at the University of Uppsala, where his father taught, and in 1730 he, too, was awarded a professorship there. His earliest research concerned the aurora borealis (also known as the northern lights, which are an unusually spectacular illumination of the night sky), and he was the first to suggest a connection between these lights and changes in the Earth's magnetic field.

Celsius traveled for several years, including an expedition into Lapland with French astronomer Pierre-Louis Maupertuis (1698–1759) to measure a degree of longitude (an angular distance of the earth). Upon his return he was appointed steward (manager) to Uppsala's new observatory, a building designated for studying the universe. He began a series of observations using colored glass plates to record the magnitude (size) of certain stars. This was the first attempt to measure the intensity of starlight with a tool other than the human eye.

The work for which Celsius is best known is his creation of a hundred-point scale for temperature; although he was not 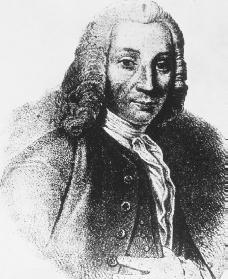 Anders Celsius.
Reproduced by permission of
Archive Photos, Inc.
the first to have done so, as several hundred-point scales existed at that time. What set Celsius's scale apart from all of the others was his decision to assign the freezing and boiling points of water as the constant temperatures at either end of the scale.

When Celsius introduced his scale in 1747, it was the reverse of today's scale, with the boiling point of water being zero degrees and the freezing point being one hundred degrees. A year later the two constants were switched, creating the temperature scale used today. Celsius originally called his scale centigrade (from the Latin for "hundred steps"). For years it was simply referred to as the Swedish thermometer. In 1948 most of the world adopted the hundred-point scale, calling it the Celsius scale.

On April 25, 1744, at the age of forty-two, Anders Celsius died of tuberculosis, a terrible disease that attacks the lungs, bones, and other body parts. He left behind many dissertations (long writings) on astronomy, as well as a well-received book entitled, "Arithmetics for the Swedish Youth," published in 1741. But for all of his accomplishments in his life's work of astronomy, the name Celsius is forever tied to an instrument used every day throughout most of the world.

The Celsius scale is named after Anders Celsius. The Celsius scale is sometimes called centigrade scale. Centigrade means, divided into 100 degrees. Anders Celsius developed his scale in 1742. He started with the freezing point of water and said that was 100 degrees Celsius. At the point where water boils, he marked that at 0 degrees Celsius. A year later they changed the constants and it became what we use today. I think this scale is much better because the measurement is broken down into an even 100 degrees.


This below is how a thermometer works.

When you look at a regular outside bulb thermometer, you'll see a thin red or silver line that grows longer when it is hotter. The line goes down in cold weather. This liquid is sometimes colored alcohol but can also be a metallic liquid called mercury. Both mercury and alcohol grow bigger when heated and smaller when cooled. Inside the glass tube of a thermometer the liquid has no place to go but up when the temperature is hot and down when the temperature is cold. Numbers are placed alongside the glass tube. That marks the temperature when the line is at that point.
2
AMINAH

How did he introduce this scale in 1747 when he died in 1744? Anyone please awser