The English physicist and chemist Henry Cavendish determined the value of the universal constant of gravitation, made noteworthy electrical studies, and is credited with the discovery of hydrogen and the composition of water.

Henry Cavendish was born in Nice, France, on October 10, 1731, the oldest son of Lord Charles Cavendish and Lady Anne Grey, who died a few years after Henry was born. As a youth he attended Dr. Newcomb's Academy in Hackney, England. He entered Peterhouse, Cambridge, in 1749, but left after three years without taking a degree.

Cavendish returned to London, England to live with his father. There, Cavendish built himself a laboratory and workshop. When his father died in 1783, Cavendish moved the laboratory to Clapham Common, where he also lived. He never married and was so reserved that there is little record of his having any social life except occasional meetings with scientific friends.

During his lifetime Cavendish made notable discoveries in chemistry, mainly between 1766 and 1788, and in electricity, between 1771 and 1788. In 1798 he published a single notable paper on the density of the earth. At the time Cavendish began his chemical work, chemists were just beginning to recognize that the "airs" that were evolved in many chemical reactions were clear parts and not just modifications of ordinary air. Cavendish reported his own work in "Three Papers Containing Experiments on Factitious Air" in 1766. These papers added greatly to knowledge of the formation of "inflammable air" (hydrogen) by the action of dilute acids (acids that have been weakened) on metals.

Cavendish's other great achievement in chemistry is his measuring of the density of hydrogen. Although his figure is only half what it should be, it is astonishing that he even found the right order. Not that his equipment was crude; where the techniques of his day allowed, his equipment was capable of precise results. Cavendish also investigated the products of fermentation, a chemical reaction that splits complex organic compounds into simple substances. He showed that the gas from the fermentation of sugar is nearly the same as the "fixed air" characterized by the compound of chalk and magnesia (both are, in modern language, carbon dioxide).

Another example of Cavendish's ability was "Experiments on Rathbone-Place Water"(1767), in which he set the highest possible standard of accuracy. "Experiments" is regarded as a classic of analytical chemistry (the branch of chemistry that deals with separating substances into the different chemicals 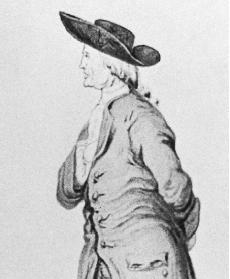 Henry Cavendish.
Courtesy of the
Library of Congress
.
they are made from). In it Cavendish also examined the phenomenon (a fact that can be observed) of the retention of "calcareous earth" (chalk, calcium carbonate) in solution (a mixture dissolved in water). In doing so, he discovered the reversible reaction between calcium carbonate and carbon dioxide to form calcium bicarbonate, the cause of temporary hardness of water. He also found out how to soften such water by adding lime (calcium hydroxide).

One of Cavendish's researches on the current problem of combustion (the process of burning) made an outstanding contribution to general theory. In 1784 Cavendish determined the composition (make up) of water, showing that it was a combination of oxygen and hydrogen. Joseph Priestley (1733–1804) had reported an experiment in which the explosion of the two gases had left moisture on the sides of a previously dry container. Cavendish studied this, prepared water in measurable amount, and got an approximate figure for its volume composition.

Cavendish published only a fraction of the experimental evidence he had available to support his theories, but his peers were convinced of the correctness of his conclusions. He was not the first to discuss an inverse-square law of electrostatic attraction (the attraction between opposite—positive and negative—electrical charges). Cavendish's idea, however, based in part on mathematical reasoning, was the most effective. He founded the study of the properties of dielectrics (nonconducting electricity) and also distinguished clearly between the amount of electricity and what is now called potential.

Cavendish had the ability to make a seemingly limited study give far-reaching results. An example is his study of the origin of the ability of some fish to give an electric shock. He made up imitation fish of leather and wood soaked in salt water, with pewter (tin) attachments representing the organs of the fish that produced the effect. By using Leyden jars (glass jars insulated with tinfoil) to charge the imitation organs, he was able to show that the results were entirely consistent with the fish's ability to produce electricity. This investigation was among the earliest in which the conductivity of aqueous (in water) solutions was studied.

Cavendish began to study heat with his father, then returned to the subject in 1773–1776 with a study of the Royal Society's meteorological instruments. (The Royal Society is the world's oldest and most distinguished scientific organization.) During these studies he worked out the most important corrections to be employed in accurate thermometry (the measuring of temperature). In 1783 he published a study of the means of determining the freezing point of mercury. In it he added a good deal to the general theory of fusion (melting together by heat) and freezing and the latent heat changes that accompany them (the amount of heat absorbed by the fused material).

Cavendish's most celebrated investigation was that on the density of the earth. He took part in a program to measure the length of a seconds pendulum close to a large mountain (Schiehallion). Variations from the period on the plain would show the attraction put out by the mountain, from which the density of its substance could be figured out. Cavendish also approached the subject in a more fundamental way by determining the force of attraction of a very large, heavy lead ball for a very small, light ball. The ratio between this force and the weight of the light ball would result in the density of the earth. His results went unquestioned for nearly a century.

Had Cavendish published all of his work, his already great influence would undoubtedly have been greater. In fact, he left in manuscript form a vast amount of work that often anticipated the work of those who followed him. It came to light only bit by bit until the thorough study undertaken by James Maxwell (1831–1879) and by Edward Thorpe (1845–1925). In these notes is to be found such material as the detail of his experiments to examine the conductivity of metals, as well as many chemical questions such as a theory of chemical equivalents. He even had a theory of partial pressures before John Dalton (1766–1844).

However, the history of science is full of instances of unpublished works that might have influenced others but in fact did not. Whatever he did not reveal, Cavendish gave other scientists enough to help them on the road to modern ideas. Nothing he did has been rejected, and for this reason he is still, in a unique way, part of modern life.