Spanish author Miguel de Cervantes is one of the greatest novelists of the Spanish language. His masterpiece, Don Quixote, is one of the most important and influential books in the history of the novel.

Miguel de Cervantes Saavedra was born in Alcalá de Henares in the old kingdom of Toledo, Spain. His birth date is unknown but a record states that he was christened on October 9, 1547. It is likely that because of the Christian name he was given, he was born on September 29, Michaelmas, the feast of St. Michael the Archangel. He was the second son and the fourth of seven children of the pharmacist-surgeon Rodrigo de Cervantes and his wife, Leonor de Cortinas.

Nothing is known of Miguel Cervantes' life until 1569. In that year Juan López de Hoyos, a humanist (having to do with human concerns and values) teacher who was devoted to literary culture and whose ideas emphasized nonreligious concerns, brought out a volume in memory of the death of Queen Isabel de Valois in 1568. Cervantes contributed three poems to this work, and López de Hoyos wrote of him as "our dear and beloved pupil." Since López de Hoyos was an admirer of the Dutch humanist Erasmus (c. 1466–1536), Cervantes' attitudes about religion and his admiration toward Erasmus is reflected in his works. Other than the probable likelihood that he studied with the Jesuits in Seville, Spain, that is all that is known about his education.

In 1570 Cervantes joined the Spanish forces at Naples, Italy. At this time the Ottoman (Turkish) Empire and the Mediterranean countries (Christians) were at war over control of land and power. As a soldier he witnessed the naval victory at the Gulf of Lepanto (now Gulf of Corinth), Greece, on October 7, 1571. Aboard the Marquesa, in the thick of the battle, he was wounded twice in 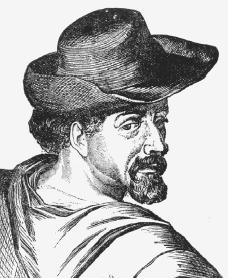 Miguel de Cervantes.
the chest and once in the left hand. The last wound maimed his hand for life. Cervantes often mentioned this victory in his works.

The fleet returned to Messina, and there Cervantes recovered. He saw battle action from 1572 through 1574. While on garrison duty in Palermo, Italy, he felt he was ready for a promotion to captain. He got letters of recommendation and obtained leave to sail back to Spain. With his brother Rodrigo he sailed from Naples on the Sol in September 1575.

On September 26 the Sol was captured with its crew and passengers. Cervantes lived in slavery for five years. In captivity he demonstrated an unbreakable will and honorable courage. He led several escape attempts but failed. Twice his family gave priests ransom money, but the amounts were not enough. The first ransom money was used to rescue his brother.

Christian merchants supplied the difference for the second attempt. On September 19, 1580, Cervantes was released. On October 10, before leaving Algiers, Cervantes wrote his Información, which described his conduct while in captivity. Two weeks later he sailed for Madrid, Spain, and on December 18, 1580, he signed a statement about his release. He had proved himself as a true Christian soldier, equally heroic in battle and in captivity.

While in Tomar, Portugal, in 1581, Cervantes was given money to accomplish a royal mission to Oran. This he did, but the royal service was not very rewarding. In a signed letter, addressed to the royal secretary and dated February, 17, 1582, Cervantes tells of his misfortunes in trying to obtain a post in the Peninsula. He also states that he is ready to apply for some post in the Indies, and reports some progress in the writing of the Galatea. This novel was to be his first published book, but it did not appear until 1585.

About this same time, Cervantes turned to writing for the theater, an activity that guaranteed a certain income if the plays were successful. In the Adjunta to his Viaje del Parnaso (1614) and in the prologue to his Ocho comedias y ocho entremeses (1615), he tells of his dramatic successes and his eventual downfall. In a manuscript discovered in 1784 it was learned that of these early plays only two have survived: Los tratos de Argel and La Numancia.

On December 12, 1584, Cervantes married Doña Catalina de Palacios Salazar y Vozmediano, from Esquivias, in the old kingdom of Toledo, Spain. About a year or two before his wedding, Cervantes had an affair with Ana Franca de Rojas, with whom he had a daughter, Isabel de Saavedra, who was to become an important figure in his later years.

In 1587 Cervantes was in Seville, Spain. The war between Spain and England was gearing up. The preparation of the Spanish Armada for its disastrous expedition against England was happening on a grand scale. But his new post as commander of the navy brought him only grief, shame, and discomfort. The Cathedral church of Seville excommunicated (denied the rights of church practices and membership) him for taking their grain in Ecija. He traveled considerably, but his finances went from bad to worse. On May 21, 1590, he wrote to the king requesting one of four vacant posts in the Indies. His request was denied. As he had before, he turned to the theater for financial help. Cervantes agreed to write six plays, but payment would be withheld if the producer did not find each of the plays to be "one of the best ever produced in Spain." Nothing is known of the outcome of this contract. For the next seven years Cervantes was in and out of jail for bad financial deals.

Little documentation for the years from 1600 to 1603 exists. It is very probable that Cervantes was jailed again for financial reasons. Most of his time must have been taken up by the writing of Don Quixote. In January 1605 Don Quixote was published in Madrid. It was an immediate success. In the words of the German philosopher F. W. J. von Schelling, Don Quixote is "the most universal, the most profound and the most picturesque portrait of life itself."

Again, from 1605 to 1608, there is little known information about Cervantes. When he reappeared in Madrid, his illegitimate (born out of wedlock) daughter, Isabel de Saavedra, involved him in a series of lawsuits having to do with her financial matters. Once more Cervantes sought escape from Spain, and in 1610 he tried to go to Naples as an attendant to the newly appointed governor, the Count of Lemos. He was turned down, but nevertheless, he dedicated five books, including the second Quixote, to the Count of Lemos.

When Cervantes was sixty-five years old he entered a period of extraordinary literary creativity. His Novelas ejemplares were published in Madrid in 1613. They are twelve little masterpieces, with which Cervantes created the art of short story writing in Spain.

In 1614 his poem Viaje del Parnaso was published. But that same year a counterfeit (fake; not genuine) copy of Don Quixote, signed with a false name, was published. The identity of this author remains the greatest mystery of Spanish literature. His writing was not affected by the publication of the counterfeit, and in 1615 he published Ocho comedias y ocho entremeses, concrete proof of his devotion to the theater. Later in 1615 Cervantes published his own second part of Don Quixote. The only fitting praise of the authentic second part of Don Quixote is to say that it is even better than the first part.

Cervantes then put all of his energy into finishing Los trabajos de Persiles y Sigismunda, a novel of adventures. He had probably begun it at the turn of the century. He signed the dedication to the Count of Lemos (dated April 19, 1616) on his deathbed. He died four days later in Madrid. His widow published his last work in 1617. Cervantes' unmarked grave is in the convent of the Calle de Lope de Vega in Madrid, Spain.