Ballroom dancers Vernon and Irene Castle led the craze for ragtime and Broadway routines adopted as social dances in the years before World War I (1914–18).

Vernon Castle was born Vernon William Blythe in Norwich, England, on May 2, 1887. His parents were William and Jane Blythe. Although he graduated from Birmingham University with a degree in engineering, he also worked as a magician in clubs and at private parties. He moved to New York with his sister Coralie and her husband Laurence Grossmith, who were actors. Although he had his engineering degree, Blythe soon turned to show business and adopted the last name Castle. In the early 1900s Castle appeared in a series of shows produced by Broadway comedian Lew Fields (1867–1941). Castle's specialty was slapstick comedy, a physical comedy with many crude practical jokes. He was often cast as "second banana" to Fields and served as dancing partner to Lotta Faust and Topsy Siegrist.

Irene Castle was born Irene Foote on April 17, 1893, in New Rochelle, New York. She was the second daughter of Dr. Hubert Townsend Foote and Annie Elroy (Thomas) Foote, whose father was press agent for the Barnum and Bailey Circus. She attended several boarding schools but did not graduate from high school. An energetic youth, Irene rode horses and belonged to the swim team. As a child she studied dancing with Rosetta O'Neill, who taught a generation of children ballroom dancing. When she was a teenager Irene appeared in amateur theatricals, often singing "The Yama-Yama Man"—the song made popular by Bessie McCoy in the Broadway show The Three Twins (1908). After becoming a star, Irene credited certain aspects of her style to McCoy, "the high shoulder, the way I held my hands, and anything that looked well about my dancing."

Vernon and Irene met in 1910 at the Rowing Club in New Rochelle, New York, which by then was a popular place for people in the entertainment business to live. Vernon arranged an audition for Irene with Lew Fields, who hired her as a replacement dancer for The Summer Widowers, her first professional appearance. Despite her father's doubts about welcoming an actor into the family, the couple was married in New Rochelle on May 28, 1911. They went to England for their honeymoon to meet Castle's family, but returned to New York in time for the August opening of The Hen-Pecks, with both Castles in the cast.

The Castles returned to Europe in 1912 because Vernon was to appear in a French revue (musical show), performing the barbershop sketch from The Hen-Pecks. The revue also included a dance for the Castles set to the 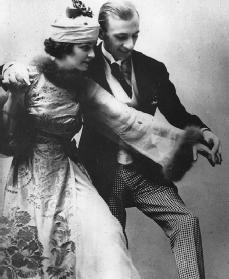 Vernon and Irene Castle.
Reproduced by permission of the
Corbis Corporation
.
music of the young songwriter Irving Berlin's (1888–1989) Alexander's Ragtime Band. While in Paris the Castles tried out a ballroom dance routine at the Café de Paris and made an instant impression. Later Irene credited their popularity to being "young, clean, married and well-mannered," but their appeal was based also on her appearance, as she was the image of "the girl next door." The Castles projected their delight in dancing with each other and made the new dances look easy.

The Castles sailed back to New York after six months in Paris. They were booked (hired) by Louis Martin for his fashionable Café de l'Opera, and New York went dance crazy over the Castles. In the period after 1910, when the Castles were busy developing their many dances—the Texas tommy, foxtrot, grizzly bear, and others—the dance and musical style of African Americans had started to become a popular part of American life. The Castles were considered the first white entertainers to hire African American musicians.

The Castles were cast in Charles Dillingham's 1912 Broadway production of The Lady of the Slipper, but they left the show. Next came The Sunshine Girl (1913) and the opening of Castle House, their dancing school across from the Ritz Hotel and Sans Souci, a supper club (a place that offers food and entertainment), in New York. Later they opened Castles in the Air on the roof of the 44th Street Theatre. Vernon taught dancing to fashionable ladies during the day and performed with his wife in their current Broadway show at night. In 1914 the Castles made a silent feature film, The Whirl of Life, loosely based on their own rise to fame. They also made a series of short films of their own dances.

Irene became a fashion leader. When she bobbed her hair, millions of women followed. Irene's light, floating "Castle frocks," headache band, and Dutch bonnet were widely photographed, described in the journals, and copied. She endorsed (supported) fashion designs and sewing patterns through the Ladies Home Journal and Butterick Patterns.

The Castles opened on Broadway in Irving Berlin's Watch Your Step (December 8, 1914, New Amsterdam Theatre). Vernon Castle played the role of Joseph Lilyburn, a dance teacher. Irene Castle played herself in a number with the boys chorus, "Show Us How To Do The Foxtrot." The hit of the show, however, was Berlin's "Syncopated Walk," which gave America a sample of the jazz music to come in the decade ahead.

After the start of World War I (a war in which Germany fought against European powers and the United States to control Europe), Vernon, who was a British citizen, grew restless as the dark news poured in from Europe. He left Watch Your Step in 1915. The Castles gave two farewell performances at the Hippodrome in New York with an orchestra led by John Philip Sousa (1854–1932). Vernon sailed for England, where he joined the Royal Air Force.

While Vernon was away, Irene continued playing in Watch Your Step until 1916, then made Patria, a fifteen-part silent film. (She appeared in sixteen more films before 1923.) Vernon became an aerial photographer and was awarded for bravery. He was killed in a plane crash at Fort Benbrook, Texas, on February 15, 1918, on a training mission with a student pilot.

Irene appeared in vaudeville (stage performance with varying acts) with William Reardon in an act that Fred Astaire helped create. Her public career ended by 1923, when she married her third husband, Frederick McLaughlin, and moved to Chicago. (Her second marriage, to Robert E. Treman, ended in divorce.) The McLaughlins had two children. Irene married her fourth husband, George Enzinger, after McLaughlin's death.

In 1939 Irene acted as adviser to the Fred Astaire-Ginger Rogers film The Story of Vernon and Irene Castle. She also performed in several summer stock plays. Her chief interest in later life was in the field of animal rescue work.

Irene Castle died in Eureka Springs, Arkansas, on January 29, 1969. She is buried next to Vernon Castle at Woodlawn Cemetery, New York.

found your site very interesting. i found a copy of Modern dancing by Mr and Mrs Vernon Castle 1914 in near perfect condition and was a taken back in time....
2
Tony Fuster

I've been a fan of the Castles since about 1958, my mother loved Fred Asaire and Ginger Rogers, I remember seeing the classic and watching it every time it came on TV thereafter. As a matter of fact this film as well as many others influenced me when it came to the military all the glory and hoopla, enough that in 1964 I enlisted in the U.S.Navy, and retired 34 years later. this classic is still one of my favorites. I also just noticed the distinct similarities between the Castles and the actors that portrayed them. Thank you
3
bob

My interest in the Castles also came from the movie with Astaire and Rogers. I wonder if some TV network like TCM could find and show some of the Castle movies? Too bad, altho their influence was dramatic on the social/entertainment scene, it lasted only a short 4 years or so.