American painter Mary Cassatt is considered a member of the French impressionists, a nineteenth-century style that emphasized impressions of scenes or objects. Best known for her series of paintings of a mother and child, she also portrayed fashionable society.

Mary Stevenson Cassatt was born in Pittsburgh, Pennsylvania, on May 23, 1845, the second of Robert and Katherine Johnson Cassatt's four children. As a child she lived for a time in France. The family then moved to Germany so that one son could pursue his studies in engineering, while another son could gain special medical attention. Upon returning to the United States in 1855, Mary studied at the Pennsylvania Academy of Fine Arts in Philadelphia, Pennsylvania. In 1866, against her father's wishes, she began her travels in Italy, Spain, and Holland. She finally settled in Paris, France, where she shocked her parents by revealing her intentions to pursue a career as a painter.

In 1866 Cassatt began her studies in France, where she came to know other famed French painters, such as Charles Chaplin and Thomas Couture (1815–1879). After a pair of rejections, she exhibited at the Salon (French art galleries) and met the famed painter Edgar Degas (1834–1917), who later became her mentor (advisor).

Despite Cassatt's success at the Salon, her heart lay with the impressionists, and in 1877, at Degas's suggestion, she joined the group and exhibited with them in 1879. Her work sold well, particularly in Philadelphia, and she in turn bought paintings by the French impressionists. She also helped American friends, such as the Havemeyers, form their collections of impressionist paintings. Cassatt remained strongly American, as do many expatriates (those living abroad). She wrote the American painter J. Alden Weir (1852–1919) that "at some future time I shall see New York the artists' ground."

Cassatt's brother, Alexander, brought his family to Paris in 1880, the first of many trips. Although she never married, she was enchanted by her nieces and nephews and excelled in painting children, who dominate her subject matter. Although her early works were done in an impressionist style, she 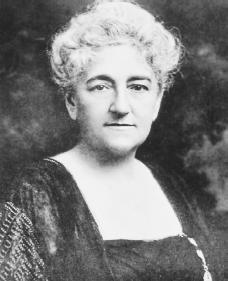 Mary Cassatt.
Reproduced by permission of
Archive Photos, Inc.
remains known as the painter and poet of the nursery.

Cassatt stopped being an impressionist painter midway through her career. Her early works portray the delicacy, the effects, the play of light and shadow of the style, but she never seemed to use broken colors and her use of complementary colors was slight. Paintings like La Lo have impressionistic qualities and have the instant effect of being caught out of the corner of the eye. Her paintings of mothers and children, however, are figurative and three-dimensional. The drawing is classical and complete, and the color, far from being light and separated into its component parts, is flat and sometimes rather sharp, much like the Japanese prints that influenced her so much. These careful figure studies, completely finished, seem to exist entirely in the atmosphere of the nursery, with no sound except the little cries.

The paintings of Mary Cassatt, filled with light and joy, give a false impression of this strong-minded and somewhat difficult woman. She was at her best in her relations with other artists, for only in this environment did she consider herself among her intellectual equals. In later life she suffered from ill health and failing eyesight and was totally blind at her death. She died in her home at Mesnil-Beaufresne, France, on June 14, 1926.

Now I Become Myselfby May SartonNow I become mslyef. It's takenTime, many years and places;I have been dissolved and shaken,Worn other people's faces,Run madly, as if Time were there,Terribly old, crying a warning, Hurry, you will be dead before (What? Before you reach the morning?Or the end of the poem is clear?Or love safe in the walled city?)Now to stand still, to be here,Feel my own weight and density!The black shadow on the paperIs my hand; the shadow of a wordAs thought shapes the shaperFalls heavy on the page, is heard.All fuses now, falls into placeFrom wish to action, word to silence,My work, my love, my time, my faceGathered into one intenseGesture of growing like a plant.As slowly as the ripening fruitFertile, detached, and always spent,Falls but does not exhaust the root,So all the poem is, can give,Grows in me to become the song,Made so and rooted by love.Now there is time and Time is young.O, in this single hour I liveAll of mslyef and do not move.I, the pursued, who madly ran,Stand still, stand still, and stop the sun!from Collected Poems 1930-1993a9 W.W. Norton, 1993
2
Kenz