Fidel Castro is the Cuban prime minister and first secretary of the Communist party of Cuba. A lawyer by training, Castro led the Cuban Revolution and transformed the island into the first communist state in the Western Hemisphere.

Fidel Castro Ruz was born on August 13, 1926, on his family's successful sugar plantation near Birán, Oriente Province, Cuba. Castro's parents had not planned to send their young son to school, but he was so set on getting an education that he talked them into letting him go when he was only six or seven years old. Castro studied in Jesuit schools in Oriente and in Havana, Cuba. He was a motivated student who did well in agriculture, history, and Spanish, and he was also an exceptional athlete. Meanwhile he showed little interest in socializing.

In 1945 Castro entered law school at the University of Havana, where student activism, violence, and gang fights were common. Castro soon joined the activists and associated with one of the gangs, the Unión Insurreccional Revolucionaria. Although police suspected him of the murder of a rival student leader and other violent actions, nothing was proven. Castro developed a reputation for his personal ambition and public speaking ability, yet he never became a well-known student leader. On several occasions he was defeated in student elections.

A taste of revolution

In 1947 Castro temporarily left the university in order to join an expedition led by writer Juan Bosch to overthrow the government of Dominican dictator Rafael Trujillo (1891–1961). The coup was called off during the ocean voyage to Dominica. Castro jumped into the shark-infested waters and swam to shore carrying a gun over his head.

The following year Castro participated in one of the most controversial episodes of his life: the Bogotazo, a series of riots in Bogotá, Colombia, following the assassination of Liberal party leader Jorge E. Gaitán (1902–1948). He joined the mobs and roamed the 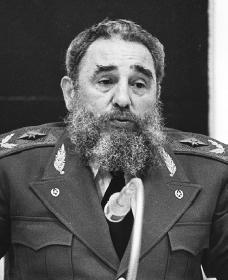 Fidel Castro.
Reproduced by permission of the
Corbis Corporation
.
streets, distributing anti-United States material and stirring a revolt. Pursued by Colombian authorities, the Cuban students sought asylum, or protection, in the Cuban embassy. Afterwards, Castro flew back to Havana and resumed his law studies.

At the university Castro was exposed to different ideologies (ideas shared by a class). The ideas of fascism (a strong central government headed by one absolute ruler) and communism (where goods and services are owned by the government and distributed among the people) were widely discussed. Castro soon found a calling with Cuba's Ortodoxo party, which stressed economic independence, political liberty, social justice, and an end to corruption. Castro also became a devoted follower of the party's charismatic leader, Eduardo Chibás.

While still a student, Castro married Mirta Díaz-Balart, a philosophy student whose wealthy family had political ties to powerful Cuban military leader Fulgencio Batista (1901–1973). The couple had one son, Fidelito, in 1949. Because Castro had no income with which to support his family, the marriage eventually ended.

Early in 1952 Castro began campaigning for a seat in congress as a replacement for Chibás. Elections were never held, however. On March 10 General Batista and his army overthrew the regime of Cuban president Carlos Prío Socarrás. For Castro, violence seemed the only way to oppose the military takeover. He organized a group of followers and on July 26, 1953, attacked the Moncada military barracks in Oriente Province. Castro was captured, tried, and sentenced to fifteen years in prison.

After being released by an amnesty (a government pardon) in 1955, Castro was sent to Mexico City, Mexico. There he began organizing an expedition against Batista called the 26th of July Movement. On December 2, 1956, Castro and eighty other men landed in Oriente Province. After encounters with the army, in which all but twelve of his men were killed or captured, Castro fled to the Sierra Maestra. In these mountains, Castro designed a guerrilla operation, where a small band of revolutionaries would attempt to remove Batista.

Castro emerged as the undisputed leader of the anti-Batista movement, and his guerrillas increased their control over rural areas. On April 9, 1958, Castro called a national strike. It was called off after Batista ordered strikers to be shot on sight, causing massive shootings. Soon Batista began losing power within his military.

On January 1, 1959, Castro and his July 26th Movement assumed power and began public trials and executions of "criminals" of the Batista government. On February 15 Castro replaced José Miró Cardona as prime minister and appointed his own brother, Raul, as commander of the armed forces. A powerful speaker and a charismatic leader, Castro began exercising an almost mystical hold over the Cuban masses. As previous revolutionaries had done, he lectured the Cubans on morality and public virtue. He also emphasized his commitment to democracy and social reform, and he promised to hold free elections—all while denying that he was a communist.

Castro confiscated (forcefully took) wealth "illegally" acquired by Batista's followers. He greatly reduced rents, and passed a law that confiscated inherited property—all moves hinting at Castro's communist leanings. By the end of 1959 many military leaders left and were replaced by communist radicals. Newspapers critical of these new leaders were quickly silenced.

Declaration of a socialist state

In April 1961 anti-Castro exiles, supported by the United States under the leadership of its newly elected president, John F. Kennedy (1917–1963), attempted an invasion of Cuba at the Bay of Pigs. The invasion failed. In December 1961 Castro merged all groups that had fought against Batista into the Integrated Revolutionary Organizations. In 1965 it became the Communist Party of Cuba—the island's only ruling party.

In foreign affairs Castro moved closer to the Soviet Union. In October 1962 Cuban-Soviet relations reached a boiling point during the Cuban Missile Crisis, where the United States faced off with the communist powers over the presence of Soviet-owned nuclear arms in Cuba. When President Kennedy avoided confrontation and directly negotiated the missiles' removal with Soviet leader Nikita Khrushchev (1894–1971), Castro felt humiliated.

Spread of the revolution

Another source of conflict in Cuban-Soviet relations was Castro's determination to take his revolution into other countries. After the 1964 Havana Conference, the Soviet Union was temporarily able to slow down Castro's support for armed struggle in Latin America. But by 1966 Castro founded the Asia-Africa-Latin America People's Solidarity Organization to promote revolution on three continents.

In July 1967 Castro formed the Latin American Solidarity Organization, which was designed to spark violence in Latin America. Castro's efforts, however, were mostly unsuccessful, as evidenced by the failure of former Cuban revolutionist Che Guevara's (1928–1967) guerrilla campaign in Bolivia in 1967. Nevertheless, Castro's efforts in this regard continued through the 1970s.

Despite the improvements that Castro brought to Cuba, he was constantly criticized for human rights abuses. Political prisoners crowded Cuban jails, while homosexuals, intellectuals, and others were constant victims of government-sponsored violence.

One of Castro's goals was to remove opposition to his rule, which he accomplished not only with executions and imprisonments, but also through forcing people to leave the country. The largest of these, the Mariel Boat Lift, occurred in response to a riot in Havana. In mid-April of 1980 Castro opened the port of Mariel to outsiders, particularly exiled Cubans living in Miami, Florida, who sailed into port to claim their relatives. Castro took advantage of the situation. He loaded boats with prison inmates, long-term psychiatric patients, and other people whose presence in Cuba was not welcomed. More than 120 thousand Cubans left their homeland for the United States, causing a small crisis upon reaching Miami.

With the collapse of the Soviet Union in the early 1990s, Castro's revolution began to lose momentum. Without support from its Soviet allies, unemployment and inflation (increase in prices) both grew in Cuba. Castro began pressing the United States to lift the trade embargo (suspension of trade) it had imposed upon Cuba since the revolution. The U.S. government remained firm, however, refusing to negotiate with Cuba on trade matters until Castro ended his form of government.

U.S.-Cuban relations had begun to show signs of warming by the latter part of the 1990s. Castro visited the United States in 1996, and invited Cuban exiles then living in the United States to return to their homeland and start businesses.

In the summer of 2000 a Cuban-U.S. media frenzy erupted when a Cuban mother and her son escaped Cuba on a makeshift boat. The mother died during the trip, but the son, Elian Gonzalez, was rescued and brought to America. Castro was heavily involved in the dispute over custody between Elian's relatives in the United States and his father in Cuba. Elian eventually returned to live with his father in Cuba.

On July 26, 2000, Castro led what may have been the largest government-organized march in Cuban history to protest the United States embargo of Cuba. The march also celebrated the forty-seventh anniversary of the Cuban Revolution.

On August 13, 2001, Castro celebrated his seventy-fifth birthday. The leader of Cuba is said to be showing his age, but he still manages to speak for hours on end and sleeps only a few hours every night. He also named his brother Raul Castro as his successor (the person who will take over for him when he leaves office).

The War Around Us
About war much has been written.
More must yet be said by those who saw them die,
so that the dead may rest,and sight be gained,
to see war for what it was, and is:

War is not fighting, though fighting's what we see,
nor is it death, for death is but it's end.
It is the rancor of disunited hearts,
the death of love, the end of hope.

The war around us echoes in our hearts,and grants it life.
Once, mortals dared to tame this ancient beast,
and yet it thrives.
Each age must fight this force again,or pay it's price!
2
ellie

This is a very good website. It has everything one wants and the most important, precise and crisp information is available here and i am glad to be introduced to such site! :)
3
Zakhia Uzzle

What Was Castros Profession before becoming a fighter
?