The French painter Paul Cézanne was one of the most important figures in the development of modern painting, in particular abstract art and cubism, a 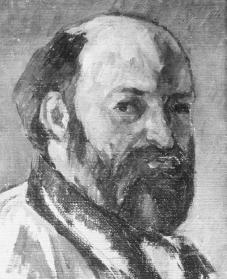 Paul Cézanne.
Reproduced by permission of
Art Resource
.
style of painting in which geometric shapes are used.

Struggling to become an artist

Paul Cézanne was born in Aix-en-Provence, France, on January 19, 1839. His father, Philippe Auguste, was the cofounder of a successful banking firm, which afforded Cézanne financial security that was unavailable to most of his fellow artists. In 1852 Cézanne entered the Collège Bourbon, where he met and became friends with Émile Zola (1840–1902). This friendship was important for both men: with youthful spirit they dreamed of successful careers in the Paris art world, Cézanne as a painter and Zola as a writer. Consequently, Cézanne began to study painting and drawing at the École des Beaux-Arts (School of Design) in Aix in 1856. His father was against the pursuit of an artistic career, and in 1858 he persuaded Cézanne to enter law school at the University of Aix. Although Cézanne continued his law studies for several years, at the same time he was enrolled in the École des Beaux-Arts in Aix, where he remained until 1861.

In 1861 Cézanne finally convinced his father to allow him to go to Paris, France. He planned to join Zola there and to enroll in the École des Beaux-Arts in Paris, but his application was rejected. Although he had gained inspiration from visits to the famous art museum, the Louvre, particularly from studying the painters Diego Velázquez (1599–1660) and Caravaggio (1573–1610), Cézanne experienced self-doubt and returned to Aix within the year. He entered his father's banking house but was bored with the work. At the same time he continued to study at the École des Beaux-Arts in Aix.

The remainder of the decade was a period of uncertainty for Cézanne. He returned to Paris in 1862 and stayed for a year and a half. During this period he met Claude Monet (1840–1926) and Camille Pissarro (1830–1903), and he became familiar with the revolutionary work of Gustave Courbet (1819–1877) and Édouard Manet (1832–1883). But he was never entirely comfortable with Parisian life and occasionally returned to Aix, where he could work and be alone.

Cézanne's paintings from the 1860s are odd and bear little resemblance to the artist's mature and more important style. The subject matter is dark and depressing and includes fantasies, dreams, religious images, and a general theme concerned with death.

A fascinating aspect of Cézanne's style in the 1860s is its sense of energy. Each piece seems the work of an artist who could be either madman or genius. That Cézanne would evolve into the latter, however, can in no way be known from these earlier examples. Although Cézanne received encouragement from Pissarro and other artists during the 1860s and enjoyed the occasional critical backing of his friend Zola, his pictures were consistently rejected by the annual salons (art exhibitions in France) and earned him harsh criticism.

In 1872 Cézanne moved to Pontoise, France, where he spent two years working very closely with Pissarro. During this period Cézanne became convinced that one must paint directly from nature. The result was that romantic and religious subjects began to disappear from his canvases. In addition, the dark range of his palette (range of colors) began to give way to fresher, more vibrant colors.

Cézanne, as a direct result of his stay in Pontoise, decided to participate in the first exhibition of the Société Anonyme des Artistes Peintres, Sculpteurs et Graveurs in 1874. Radical artists who had been constantly rejected by the official salons organized this historic exhibition. It inspired the term "impressionism," a revolutionary art form where the "impression" of a scene or object is generated and light is simulated by primary colors.

After 1877 Cézanne gradually withdrew from the impressionists and worked in increasing isolation at his home in southern France. This withdrawal was linked with two factors. First, the more personal direction his work began to take, a direction not taken by the other impressionists. Second, the disappointing responses that his art continued to generate among the public at large. In fact, Cézanne did not show his art publicly for almost twenty years after the third impressionist show.

Cézanne's paintings from the 1870s clearly show the influence of impressionism. In the House of the Hanged Man (1873–1874) and the Portrait of Victor Choquet (1875–1877) he painted directly from the subject and used the short, loaded brushstrokes that are characteristic of the style as it was forged by Monet, Pissarro, and Pierre-Auguste Renoir (1841–1919).

During the 1880s Cézanne saw less and less of his friends, and several personal events affected him deeply. In 1886 he married Hortense Fiquet, a model with whom he had been living for seventeen years. Also, his father died that same year. Probably the most significant event of this year, however, was the publication of the novel L'Oeuvre by his friend Zola. The hero of the story is a painter (generally acknowledged to be a combination of Cézanne and Manet) whom Zola presented as an artistic failure. Cézanne took this as an insult to both him and his career and, bitterly hurt, he never spoke to Zola again.

Cézanne's isolation in Aix began to lessen during the 1890s. In 1895, owing largely to the urging of Pissarro, Monet, and Renoir, the dealer Ambroise Vollard (1865–1939) showed a large number of Cézanne's paintings, and public interest in his work slowly began to develop. In 1899, 1901, and 1902 Cézanne sent pictures to the annual Salon des Indépendants in Paris. In 1904 he was given an entire room at the Salon d'Automne. While painting outdoors in the fall of 1906 Cézanne was overtaken by a storm and became ill. He died in Aix on October 22, 1906. At the Salon d'Automne of 1907 his achievement was honored with a large retrospective exhibition (an exhibit that shows an artist's life work).

Cézanne's paintings from the last twenty-five years of his life led to the development of modern art. Working slowly and patiently, he developed a style that has affected almost every radical phase of twentieth-century art. This new form is apparent in many works, including the Bay of Marseilles from L'Estaque (1883–1885), Mont Sainte-Victoire (1885–1887), the Cardplayers (1890–1892), the White Sugar Bowl (1890–1894), and the Great Bathers (1895–1905).

Do you have any more self portriats of paul cezanne?
I would like to see more pictures of him
2
stuart cropper

Paul Cezanne worked at his art "despite people " his own faith in what he was and what he was . burned into his soul this driving force within paul cezanne turned a mere mortal into an icon .