William Blake was an English poet, engraver, and painter. A boldly imaginative rebel in both his thought and his art, he combined poetic and pictorial genius to explore life.

William Blake was born in London, England, on November 28, 1757, the second son of a mens' clothing merchant. Except for a few years in Sussex, England, his entire life was spent in London. From his earliest years he saw visions. He would see trees full of angels or similar sights. If these were not true mystical visions, they were the result of the artist's intense spiritual understanding of the world. From his early teens Blake wrote poems, often setting them to melodies of his own composition.

At age ten Blake started at the well-known Park's drawing school, and at age fourteen he began a seven-year apprenticeship (studying and practicing under someone skilled) to an engraver. It was as an engraver that Blake earned his living for the rest of his life. After he was twenty-one, Blake studied for a time at the Royal Academy of Arts, but he was unhappy with the instruction and soon left.

In August 1782 Blake married Catherine Boucher, who had fallen in love with him at first sight. He taught her to read and write, and she later became a valued assistant. His "sweet shadow of delight," as Blake called Catherine, was a devoted and loving wife.

When he was twenty-six, he wrote a collection entitled Poetical Sketches. This volume 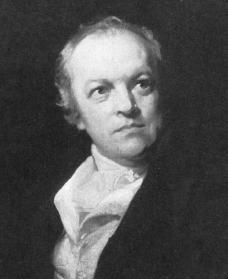 William Blake.
Reproduced by permission of the
National Portrait Gallery (London)
.
was the only one of Blake's poetic works to appear in conventional printed form—he later invented and practiced a new method.

After his father died in 1784, Blake set up a print shop next door to the family shop. In 1787 his beloved brother Robert died; thereafter William claimed that Robert communicated with him in visions. It was Robert, William said, who inspired him with a new method of illuminated etching. The words and or design were drawn in reverse on a plate covered with an acid-resisting substance; acid was then applied. From these etched plates pages were printed and later hand-colored. Blake used his unique methods to print almost all of his long poems.

In 1787 Blake produced Songs of Innocence (1789) as the first major work in his new process, followed by Songs of Experience (1794). The magnificent lyrics in these two collections carefully compare the openness of innocence with the bitterness of experience. They are a milestone because they are a rare instance of the successful union of two art forms by one man.

Blake spent the years 1800 to 1803 in Sussex working with William Hayley, a minor poet and man of letters. With good intentions Hayley tried to cure Blake of his unprofitable enthusiasms. Blake finally rebelled against this criticism and rejected Hayley's help. In Milton (c. 1800–1810), Blake wrote an allegory (story with symbols) of the spiritual issues involved in this relationship. He identified with the poet John Milton (1608–1674) in leaving the safety of heaven and returning to earth. Also at this time in life Blake was accused of uttering seditious (treasonous) sentiments. He was later found not guilty but the incident affected much of Blake's final epic (long lyric poem highlighting a single subject), Jerusalem (c. 1804–1820).

Back in London, Blake worked hard at his poems, engraving, and painting, but he suffered several reverses. He was the victim of fraud in connection with his designs for Blair's (1699–1746) poem The Grave. He also received insulting reviews of that project and of an exhibition he gave in 1809 to introduce his idea of decorating public buildings with portable frescoes (paintings done on moist plaster using water-based paints).

Blake had become a political sympathizer with the American and French Revolutions. He composed The Four Zoas as a mystical story predicting the future showing how evil is rooted in man's basic faculties—reason, passion, instinct, and imagination. Imagination was the hero.

The next decade is a sad and private period in Blake's life. He did some significant work, including his designs for Milton's poems L'Allegro and Il Penseroso (1816) and the writing of his own poem The Everlasting Gospel (c. 1818). He was also sometimes reduced to writing for others, and the public did not purchase or read his divinely inspired predictions and visions. After 1818, however, conditions improved. His last six years of life were spent at Fountain Court surrounded by a group of admiring young artists. Blake did some of his best pictorial work: the illustrations to the Book of Job and his unfinished Dante. In 1824 his health began to weaken, and he died singing in London, England, on August 12, 1827.

Blake's history does not end with his death. In his own lifetime he was almost unknown except to a few friends and faithful sponsors. He was even suspected of being mad. But interest in his work grew during the middle of the nineteenth century, and since then very committed reviewers have gradually shed light on Blake's beautiful, detailed, and difficult mythology. He has been acclaimed as one who shares common ideals held by psychologists, writers (most notably William Butler Yeats [1865–1939]), extreme students of religion, rock-and-roll musicians, and people studying Oriental religion. The works of William Blake have been used by people rebelling against a wide variety of issues, such as war, conformity (behaving in a certain way because it is accepted or expected), and almost every kind of repression.

NYC
Blake's artistic ability became evident in his youth, and by age 10, he was enrolled at Henry Pars's drawing school, where he sketched the human figure by copying from plaster casts of ancient statues. At age 14, he apprenticed with an engraver. Blake's master was the engraver to the London Society of Antiquaries, and Blake was sent to Westminster Abbey to make drawings of tombs and monuments, where his lifelong love of gothic art was seeded.

Also around this time, Blake began collecting prints of artists who had fallen out of vogue at the time, including Durer, Raphael and Michelangelo. In the catalog for an exhibition of his own work in 1809, nearly 40 years later, in fact, Blake would lambast artists "who endeavour to raise up a style against Rafael, Mich. Angelo, and the Antique." He also rejected 18th century literary trends, preferring the Elizabethans (Shakespeare, Jonson and Spenser) and ancient ballads instead.