Konrad Bloch's investigations of the complex processes by which animal cells produce cholesterol have increased our understanding of the biochemistry of living organisms and have helped further research into treatment of various common diseases. For his contributions to the study of how the body creates cholesterol, he was awarded the 1964 Nobel Prize in Physiology or Medicine.

Konrad Emil Bloch was born on January 21, 1912, in the German town of Neisse (now Nysa, Poland) to Frederich (Fritz) D. Bloch and Hedwig Bloch. After receiving his early education in local schools, Bloch attended the Technische Hochschule (technical university) in Munich, Germany, from 1930 to 1934. He quickly developed an interest in organic chemistry, partly through the influence of his teacher, Hans Fischer. Also at this time he was inspired while attending lectures by leading chemists of the time, including Adolph Windaus (1876–1959), Rudolph Willstatter (1872–1942), and Heinrich Wieland (1877–1957).

He earned a degree in 1934, the year after Adolf Hitler (1889–1945) became chancellor (leader) of Germany. Bloch moved to Switzerland after graduating and lived there until 1936. While in Switzerland he conducted his first published biochemical research. He worked at the Swiss Research Institute in Davos, where he performed experiments involving the biochemistry of the bacteria (microscopic parasites) that causes tuberculosis, a deadly disease that attacks the lungs and bones.

In 1936 Bloch left Switzerland for the United States, where he earned his doctorate degree in biochemistry in 1938 at the College of Physicians and Surgeons at Columbia University. Bloch joined the school's faculty and later accepted a position at Columbia on a research team led by Rudolf Schoenheimer (1898–1941). With his associate David Rittenberg, Schoenheimer had developed a method of using radioisotopes (radioactive forms of atoms) to track the path of particular molecules in 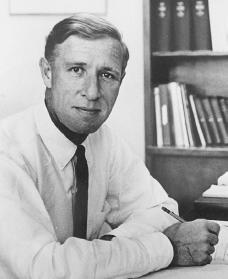 Konrad Bloch.
Courtesy of the
Library of Congress
.
cells and living organisms. This method was especially useful in studying the biochemistry of cholesterol.

Cholesterol, which is found in all animal cells, contains twenty-seven carbon atoms in each molecule. It plays an essential role in the cell's functioning, as it stabilizes cell membrane (walls of the cell). Before Bloch's research, scientists knew little about cholesterol, although many believed there was a connection between the amount of cholesterol and other fats in the diet and arteriosclerosis (an unhealthy buildup of cholesterol deposits inside the arteries).

After Schoenheimer died in 1941, Rittenberg and Bloch continued to conduct research on cholesterol. From their research they learned that acetate (a salt of acetic acid, an important acid found in the body) is a major part of cholesterol. This was the beginning of Bloch's work for many years—the investigation of the complex pattern of steps in the cholesterol's biosynthesis, the production of complex cells from simple cells.

Between 1946 and 1954 Bloch continued his research into the origin of all twenty-seven carbon atoms in the cholesterol molecule. Bloch's research explained the significance of acetic acid as a building block of cholesterol, and showed that cholesterol is an essential component of all body cells. In fact, Bloch discovered that all steroid-related substances (hormones, or substances released by organs for the organic process) in the human body are derived from cholesterol.

In 1941, Bloch married Lore Teutsch, whom he met in Munich. They had two children, Peter and Susan.

In 1964 Bloch and his colleague Feodor Lynen, who had independently performed related research, were awarded the Nobel Prize for Physiology or Medicine. The same year Bloch was honored with the Fritzsche Award from the American Chemical Society and the Distinguished Service Award from the University of Chicago School of Medicine.

Bloch was known for his extreme modesty. When he was awarded the Nobel Prize, the New York Times reported that he refused to have his picture taken in front of a sign that read, "Hooray for Dr. Bloch!" On October 15, 2000, Bloch died of heart failure at the Lahey Clinic in Burlington, Massachusetts. He was eighty-eight years old.

According to the Harvard University Gazette, Dean Jeremy R. Knowles called Bloch, "a marvelously perceptive biochemist and genius," and added that Bloch's "deep understanding of metabolism laid the chemical foundations of today's biology."