British politician and Prime Minister Tony Blair represented a new era in Parliament and made major changes to the Labour Party along the way.

Anthony Charles Lynton Blair was born in Edinburgh, Scotland, on May 6, 1953. His father, Leo, a successful lawyer, chose to run for Parliament in 1963. He suffered a stroke just before the election, leaving him unable to speak for three years. His three children had to learn to take care of themselves to be able to cope with the family's stress. His father also encouraged the children to achieve in politics what he himself could not, and as Blair said in an interview with Martin Jacques for the London Sunday Times, "I felt I couldn't let him down."

But there was another part of the family tree whose genes influenced the young Blair. His natural grandparents (his father was adopted) had been actors and dancers, and Blair followed in their footsteps during his student days. He received rave reviews for his performances at Fettes College, organized gigs for rock groups, and later, as a student at St. John's College at Oxford University, was the lead singer for Ugly Rumors, a rock band that played the music of such bands as Fleet-wood Mac, the Rolling Stones, and the Doobie Brothers.

In time, however, Blair followed his father's career and received a law degree from Oxford University in Oxford, England, in 1975. He then worked as an intern (a student working under the guidance of an experienced person) with Queen's Counsel (QC) Alexander Irvine. Irvine remembered Blair in the New Yorker as being able to absorb difficult issues: "One of his principal skills was absorbing enormously complicated material. Make your best points on the issues—he was very good at that." Blair worked on employment law cases. His ability to communicate well proved very useful as he became involved in local politics. Blair married Cherie Booth, another intern and a top graduate of the London School of Economics, in March 1980. They had four children.

Rising up the ranks

Blair's father had belonged to the Tory Party (also known as the Conservatives, who preferred to maintain traditions and avoid change). Having witnessed the power of the local miners where he grew up, Blair joined the Labour Party. The miners were the main strength of the Labour Party in England, which at this time was in crisis. Strikes by several unions in the winter of 1978 had contributed to a large Tory victory in 1979, because the people viewed the Labour Party as being controlled by the unions. In 1983 Blair was elected to Parliament along with 208 other Labour Party MPs (Members of Parliament), the smallest number since 1935.

After Conservative Prime Minister Margaret Thatcher's (1925–) reelection in 1983, Neil Kinnock became the new leader of the opposition Labour Party. Kinnock promoted Blair to several posts, including spokesperson on treasury and economic affairs from 1984 to 1987, and spokesperson on trade and industry in 1987. Blair also spent time investigating the causes of the October 1987 stock market crash. After the 1992 election, which brought the Tory John Major (1943–) to power, Kinnock had to resign and John Smith replaced him. After Smith's death in 1994, Blair was elected as leader of the Labour Party.

Blair realized that the Labour Party had to change its message; it could not win over voters using the old ideas of the welfare state and its emphasis on national industry and union privileges. He supported policies to decrease crime, lower taxes, improve trade, and give more power to local and regional governments. Blair also called for a nation "where people succeed on the basis of what they give to their country," as noted in Knight-Ridder/Tribune News Service. There would be an increasing emphasis on family and community values, and it would be the government's job to create conditions under which families could prosper.

Blair was able to push through his ideas because the Labour Party had changed how it elected its leaders. In the past officials had been elected by a system of block votes, which were divided among special interest groups and leaders—trade unions and MPs, for example—rather than by one vote per person. Blair had tried to institute "one person, one vote" at his local party branch in 1980, but failed. However, the system had just been changed to a version of one vote per person when Blair ran for the party leadership in 1994. This worked to his advantage 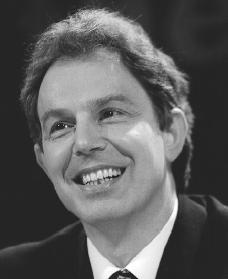 Tony Blair.
Reproduced by permission of
AP/Wide World Photos
.
because the new voting method had the most benefit for a skilled politician such as him.

Blair also succeeded in convincing Labour Party members to rewrite Clause Four of the party charter. The clause called for the redistribution of wealth through "common ownership of the means of distribution, production, and exchange," which is basically a definition of socialism. With the change the party could no longer be labeled just the party of the working class. This "New Labour" supported free enterprise while working to lower budget deficits (the amount by which spending exceeds income) and control inflation (a general increase in prices). Although some argued that the Labour Party now seemed very similar to the Conservatives, Blair won the national election in May 1997, with Labour winning a majority of 179 seats out of 659 in the House of Commons.

Blair believed that the government had a duty to help people, and his proposed reforms to welfare spending and social programs were well received. He established a training program for welfare recipients to provide education and increase employment opportunities. He also came up with a plan to improve the British National Health Service, making sure that all British citizens had access to health care. Blair also won praise for ending the thirty-year war in Northern Ireland between the Catholic minority and the Protestant, British-favoring majority. In April 1998 the leaders in Northern Ireland reached an agreement to create a new Northern Ireland Assembly, giving the Irish Republic (the Southern portion of the island) a say in the affairs of the North. In return, the Irish Republic agreed to cease efforts to reclaim the North. A British-Irish Council was also created to link Northern Ireland with Wales, Scotland, and England.

In Europe Blair took a more traditional stand. He was aware that many within the country disapproved of too much British involvement with other European countries. The country maintained its right to "opt-out" of certain provisions agreed to by other members of the European Union. It chose not to participate in the European Monetary Union at its creation in 1998. (That group was created to gradually phase in a new common currency that all of its members would use.) Other European politicians began to imitate Blair's policies, including Gerhard Schroeder (1944–) in Germany and Dutch Prime Minister Wim Kok.

On May 20, 2000, Blair's wife, Cherie, gave birth to the couple's fourth child, Leo. The boy was the first child born to a serving British prime minister in 152 years. In the June 2001 elections Blair and the Labour Party won easily, marking the first time in the party's history that it won a second full term. Blair took on new duties after the terrorist attacks on the United States on September 11, 2001. He offered full support to the United States and its President, George W. Bush (1946–). Blair visited the leaders of more than seventy countries to seek their support in the war on terrorism, and he met often with President Bush to discuss the results of those meetings.