Elizabeth Garrett Anderson was the first woman officially approved to practice medicine in Great Britain, and was a pioneer in opening education in medicine to women. She made great sacrifices and struggled to create new pathways for women in British medicine.

Elizabeth Garrett was the second of ten children (four sons and six daughters) born to Newson Garrett, a successful businessman of Aldeburgh, Suffolk, England, and his wife, Louisa Dunnell Garrett. Her parents had not always been wealthy, and Garrett's father was eager to make sure his children's circumstances would improve. Believing that all his children—girls as well as boys—should receive the best education possible, Elizabeth's father saw to it that she and her sister Louie were taught at home by a governess (a live-in, female tutor). In 1849 they were sent to the Academy for the Daughters of Gentlemen, a school in Blackheath, England, run by the aunts of famous poet Robert Browning (1812–1889). Garrett would later shudder when she recalled the "stupidity of the teachers" and the school's lack of instruction in science and mathematics. Nonetheless the school's rule requiring students to speak French proved to be a great benefit.

On her return to Aldeburgh two years later, Garrett studied Latin and mathematics with her brothers' tutors. Garrett's friend, the educator Emily Davies (1830–1921), encouraged her to reject the traditional life of the well-to-do English lady. Davies believed that women should be given the opportunity to obtain a better education and prepare themselves for a profession, especially medicine. But Davies herself did not feel suited to becoming a pioneer in medicine and encouraged Garrett to take on this role.

In 1859 Garrett met Elizabeth Blackwell, the first woman in America to graduate from a regular medical school. Blackwell was delivering a series of lectures in London, England, on "Medicine as a Profession for Ladies." Blackwell compared what she considered the useless life of the well-to-do lady with the services that female doctors could perform. She stressed the contributions female doctors could make by educating mothers on nutrition (proper diet) and child-care, as well as working in hospitals, schools, prisons, and other institutions. Blackwell was enthusiastic about Garrett's interest and potential, and she helped fuel Garrett's interest in becoming a fully accredited physician 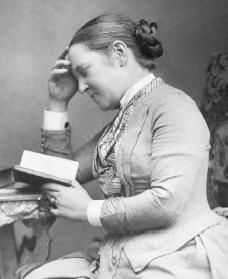 Elizabeth Garrett Anderson.
Reproduced by permission of the
Corbis Corporation
.
(a physician who is recognized as having met all of the official requirements needed to practice medicine).

Although Garrett's father at first found the idea of a woman physician "disgusting," he went with Garrett as she visited well-known physicians, seeking advice on how to pursue her goal. The doctors told Garrett and her father that it was useless for a woman to seek a medical education, because a woman's name would not be placed on the Medical Register, an official list of approved doctors. Unless a person's name was listed on the Medical Register, that person could not legally practice medicine in England.

Eventually, Garrett began a "trial period" of work as a surgical nurse (a nurse who assists during surgeries) at London's Middlesex Hospital. She used the opportunity to attend surgical procedures and gain some of the training given to medical students. At the end of her three-month trial period, she unofficially became a medical student. She visited patients, worked in the dispensary (a unit where medical supplies and treatments are given out), and helped with emergency patients. The hospital staff accepted her as a guest, but would not officially accept her as a student.

Despite further rejections from Oxford and Cambridge universities and the University of London, Garrett would not be held back. Determined to earn a qualifying diploma in order to place her name on the Medical Register, she decided to pursue the degree of Licentiate of the Society of Apothecaries (L.S.A.). Apothecaries were pharmacists—that is, they prepared and gave out medications. Although the L.S.A. degree was not as impressive as the M.D. (Doctor of Medicine) degree, people with L.S.A.s were officially recognized as physicians. A person had to work for five years under the guidance of a doctor, take certain required lecture courses, and pass an examination to qualify. Although Britain's organization for apothecaries was not at all an advocate of equal opportunity for women, its charter stated that it would examine "all persons" who had satisfied the regulations.

Garrett tried to study at St. Andrews University in Scotland, but the school refused to allow a woman to graduate from its programs. She was finally able to piece together the required courses she needed. But when Garrett presented her qualifications to the Society of Apothecaries in the fall of 1865, they refused to allow her to take the examination that would qualify her for an L.S.A. degree. After Garrett's father threat ened to take them to court, they changed their minds. Garrett passed the qualifying examination and her name was listed in the Medical Register one year later.

Garrett's goal was to establish a hospital for women staffed by women. Thus in 1866 she opened the St. Mary's Dispensary for Women in London. The dispensary (which was not a full-fledged hospital, but was a place where aid and supplies were distributed) filled a great need, and soon found it necessary to expand its services. In 1872, with a ward (unit) of ten beds, the dispensary became the New Hospital for Women and Children.

Garrett maintained a strong interest in the reform of education. At the time free basic education was becoming a reality for poorer children, and the working men of the district in which she practiced medicine asked her to run for election to the school board. She was elected to the London School Board in 1870, the same year she obtained her M.D. degree from the University of Paris. In 1869 Garrett applied for a position at the Shadwell Hospital for Children in London. One of the members of the hospital board of directors who interviewed her was James George Skelton Anderson, her future husband. They were married in 1871.

The New Hospital for Women provided a demonstration of what trained professional women could accomplish. In 1878 Garrett became the first woman in Europe to successfully perform an ovariotomy (removal of one or both ovaries, the female reproductive glands that produce eggs). Garrett did not enjoy operating, however, and was perfectly willing to turn this part of hospital work over to other women surgeons on her staff. The hospital moved to a larger site in 1899, nearly twenty years before it was renamed the Elizabeth Garrett Anderson Hospital.

In 1874 Garrett helped establish the London School of Medicine for Women, where she taught for twenty-three years. Two years after its founding, the school was placed on the list of recognized medical schools, guaranteeing its graduates access to a medical license. In 1877 the school was attached to the Royal Free Hospital, and was permitted to grant the degrees that were required for enrollment on the British Medical Registry.