The American physicist Carl David Anderson opened up the entire field of particle physics, the study of the atom, the smallest unit of matter. Because of his discoveries of the positron (positive electron) and the meson (similar to the negative electron), two particles that make up the atom, Anderson was awarded the Nobel Prize in Physics in 1936.

On September 3, 1905, Carl David Anderson was born in New York, New York. He was the only child of Swedish parents, Carl and Emma Anderson. When he was a child Anderson wanted a career in athletics, as a high jumper. The Anderson family moved to Los Angeles, where Carl David attended Los Angeles Polytechnic High School and first became interested in science. In 1924 he entered the California Institute of Technology (Cal Tech), with which he would remain associated throughout his life. In 1927 Anderson received his bachelor's degree. He then continued his education in graduate school on a research grant, centering his graduate work on physics and mathematics.

As a teacher Anderson obtained a doctorate degree with honors in 1930 under the physicist R. A. Millikan (1868–1953), who was awarded the Nobel Prize in 1923 for his work in physics. After working with Millikan at Cal Tech as a researcher for three years, Anderson was promoted to assistant professor in 1933. He eventually worked his way to chairman of the Division of Physics, Mathematics, and Astronomy in 1962.

Discovery of the positron

In the years immediately after Anderson received his degree, he discovered the positron, or positive electron—a revolutionary discovery, because the positron became the first known antiparticle (the oppositely charged particles of an atom) and the first known positively charged particle other than the proton. Anderson made his discovery during his and Millikan's quest to determine the nature of cosmic rays (positive particles from outer space) by allowing the rays to pass through a Wilson cloud chamber (a device used to detect elementary particles) in a strong magnetic field. By 1931 he had found evidence indicating that the rays produced charged particles whose tracks were very similar to those produced by ordinary electrons, except that they were bent by the magnetic field in the opposite direction. His famous photograph taken on August 2, 1932, clearly displayed a positron crossing a lead plate placed in the cloud chamber.

The following spring P. M. S. Blackett (1897–1974) and G. P. S. Occhialini were working independently at the Cavendish Laboratory in England. They produced a number of cloud chamber photographs indicating that a gamma-ray photon (electromagnetic energy) interacting with the intense electromagnetic field surrounding a nucleus, 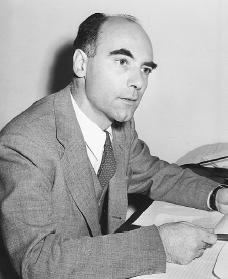 Carl David Anderson.
Reproduced by permission of
AP/Wide World Photos
.
the center part of an atom, can create a positron-electron pair—that is, matter (anything that has mass and occupies space). They also recognized, as Anderson at the time had not, that Anderson's positron was the same particle that had been predicted by P. A. M. Dirac's (1902–1984) 1928 relativistic quantum-mechanical theory of the electron, a theory that described the structure of the atom. (Many physicists had believed Dirac's theory to be imperfect because it used the yet-undiscovered positron.) Work by Anderson and others established beyond doubt the proper experimental conditions for the creation and destruction of positrons.

In 1936 Anderson made a second important experimental discovery: the existence of a charged particle in cosmic radiation (rays from the sun) with a mass (an amount of matter) of about 200 electron masses, or of about one-tenth the mass of a proton. Anderson named these particles mesotrons (later shortened to mesons). He believed them to be identical to the nuclear particle H. Yukawa (1907–1981) had theoretically predicted less than two years earlier. It was later realized, however, that Anderson's meson is actually the mu meson (or muon), and Yukawa's meson is actually the pi meson (or pion). After World War II (1939–45) Anderson continued to develop the field of particle physics, which his groundbreaking 1932 discovery had opened up for research.

Anderson received many honors, beginning at just thirty-one years of age with the Nobel Prize for Physics in 1936, which he shared with V. F. Hess (1883–1964). Anderson received several honorary doctoral degrees and became a member of the National Academy of Sciences.

In 1946 he married Lorraine Elvira Bergman. The Andersons had two sons, Marshall and David. Anderson maintained his research and teaching activities until his retirement in 1976. He died in San Marino, California on January 11, 1991, at the age of eighty-five.