Marian Anderson was born in Philadelphia, Pennsylvania, on February 27, 1897. She was educated in the public schools. She displayed a remarkable skill for singing when she was very young, and she loved singing for her church choir. When she could not afford singing lessons, her fellow choir members raised the money that allowed her to study with a famous singing teacher.

When Anderson was twenty-three years old, she entered a competition and won first place over three hundred other singers. The 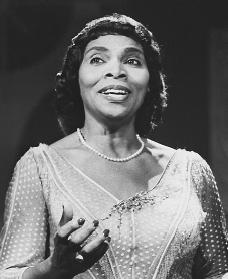 Marian Anderson.
Reproduced by permission of the
Corbis Corporation
.
prize was the opportunity to sing with the New York Philharmonic orchestra. Further sponsorships enabled her to continue her studies in both the United States and in Europe.

Following Anderson's debuts (first performances on stage in a particular city) in Berlin, Germany, in 1930 and London, England, in 1932, she performed in Scandinavia (northern Europe), South America, and the Soviet Union. In Salzburg, Austria, she gave a sensational performance. The famous conductor Arturo Toscanini (1867–1957) was in the audience. After hearing her sing, Toscanini said she had "a voice heard but once in a century."

Return to the United States

At the end of Anderson's European tour, she was signed to a contract for fifteen concerts in the United States. On December 30, 1935, she opened her American tour at New York's Town Hall. She performed pieces by European classical composers as well as several African American spirituals (traditional religious songs). The performance was a great success. Critics welcomed her as a "new high priestess of song." In the words of a writer for the New York Times, the concert established her as "one of the great singers of our time."

Over the next several years Anderson sang for U.S. president Franklin Delano Roosevelt (1882–1945) at the White House and for Great Britain's King George VI (1895–1952) during his 1939 visit to the United States. She made several cross-country tours and soon was booking engagements (scheduling jobs) two years in advance. In one year she traveled twenty-six thousand miles. It was the longest tour in concert history. She gave seventy concerts in five months. After World War II (1939–45; a war fought between Great Britain, France, the Soviet Union, and the United States against Germany, Italy, and Japan) ended, she performed in major European cities again. By 1950 it was estimated that she had performed before nearly four million listeners.

Anderson was a pioneer in winning recognition at home and abroad for African American artists. In 1939 an incident involving the Daughters of the American Revolution (DAR) helped focus public attention on racism. The DAR denied Anderson use of their Constitution Hall in Washington, D.C., for an April concert. First Lady Eleanor Roosevelt resigned from the DAR in protest and had the U.S. government allow Anderson to perform at the Lincoln Memorial. Her concert there, on Easter morning, drew a live audience of seventy-five thousand, and millions more heard it over the radio.

In 1948 Anderson underwent a dangerous throat operation for a growth that threatened to damage her voice. For two months she was not permitted to use her voice. She was not sure if she would ever be able to sing again. When she was finally allowed to rehearse, her voice returned free of damage. Following her recovery, Anderson made her first post–World War II tour of Europe, including stops in Scandinavia, Paris (France), London (England), Antwerp (Belgium), Zurich (Switzerland), and Geneva (Switzerland).

In 1955, and again in 1956, Anderson sang in an opera at New York's Metropolitan Opera House. This was the first time an African American had sung with the Metropolitan since it opened in 1883. Over the years Anderson continued to add to her accomplishments. She sang at the presidential inaugurations of Dwight D. Eisenhower (1890–1969) and John F. Kennedy (1917–1963). In 1957 Anderson made a concert tour of India and the Far East for the U.S. State Department. In 1958 President Eisenhower appointed her a delegate (representative) to the Thirteenth General Assembly of the United Nations (UN). She was awarded the UN Peace Prize in 1977. Anderson gave her farewell concert (last public performance) at Carnegie Hall in New York on Easter Sunday in 1965. She died on April 8, 1993, in Portland, Oregon.

A New York Times music critic wrote about Anderson this way: "Those who remember her at her height … can never forget that big resonant voice, with those low notes almost visceral [having to do with basic emotions] in nature, and with that easy, unforced ascent to the top register. A natural voice, a hauntingly colorful one, it was one of the vocal phenomena [rare event] of its time."

this website helped me out alot on my Black History project. But only if she were here i would of loved that.
Oh God.....why did you take her way???
2
Lashay

This article was very helpful for my project .This is a wonderful website.
4
Sonia

Very nice article about a very special person. Thank you. I became interested in Marian Anderson when the spiritual hymn Deep River was scheduled for our choir to sing. I was not able to go to the rehearsal. I listened to Marian Anderson on You-tube singing Deep River so I could rehearse at home and learn the song. We will be singing this spiritual in honor of the departed. It will be so special when I think of this wonderful lady as i sing.