The works of Richard Wright, a politically sophisticated and socially involved African American author, are notable for their passionate sincerity. He was perceptive about the universal problems that had the ability to destroy mankind.

Richard Nathaniel Wright was born in Natchez, Mississippi, on September 4, 1908. His mother was a country school teacher and his father an illiterate (a person who is unable to read or write) sharecropper, a poor farmer who shares land with other farmers. The family moved to Memphis, Tennessee, in 1914, and soon the father abandoned them. From then on Richard's education was inconsistent, but he had attained experience beyond his years. He bounced from school to school and desperately tried to make friends and fit in with his fellow classmates.

Wright knew what it was to be a victim of racial hatred before he learned to read, for he was living with an aunt when her husband was lynched (brutally attacked or killed because of one's race). Richard's formal education ended after the ninth grade in Jackson, Mississippi. The fact that his "The Voodoo of Hell's Half-acre" had been published in the local black paper set him apart from his classmates. He was a youth upon whom a dark spirit had already settled.

At nineteen Wright decided he wanted to be a writer. He moved to Chicago, Illinois, where he had access to public libraries. He read all he could of Feodor Dostoevsky (1821–1881), Theodore Dreiser (1871–1945), Henry 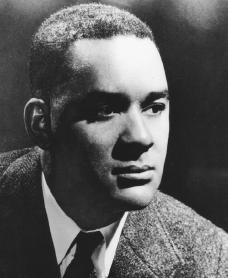 Richard Wright.
Reproduced by permission of
Fisk University Library
.
James (1843–1916), and William James (1842–1910). His interest in social problems led to a friendship with the sociologist (a person who studies the interactions of a society) Louis Wirth. When Richard's mother, brother, and an aunt came to Chicago, he supported them as a postal clerk until the job ended in 1929. After months of living on public welfare, he got a job in the Federal Negro Theater Project in the Works Progress Administration, a government relief agency. Later he became a writer for the Illinois Writers' Project.

Meantime, Wright had joined the John Reed Club, beginning an association with the Communist Party, a political party that believes goods and services should be owned and distributed by a strong central government. His essays, reviews, short stories, and poems appeared regularly in communist papers, and by 1937, when he became Harlem editor of the Daily Worker, he enjoyed a considerable reputation in left-wing circles. Four novellas (short novels), published as Uncle Tom's Children (1938), introduced him to a large general audience.

Wright's first novel, Native Son (1940), a brutally honest depiction of black, urban, ghetto life, was an immediate success. The story's protagonist, or main character, represents all the fear, rage, rebellion, spiritual hunger and the undisciplined drive to satisfy it, that social psychologists (people who are trained to study the mental and behavioral characteristics of people) were just beginning to recognize as common elements in the personality of the poor people of all races.

Wright's intention was to make the particular truth universal (all around) and to project his native son as a symbol of the poorly treated in all lands. Critics, however, unimpressed by the universal symbol, were interested instead in Wright's passionate criticisms of white racism (belief that one race is superior to another) and the lifestyle it imposed upon African Americans. Wright believed that there was a better way of social organization different from democracy (government by the people), and that Communism could be the better way. These ideas were toned down in the stage version. In 1941 Wright also published Twelve Million Black Voices: A Folk History of the Negro of the United States.

By 1940 Wright had married and divorced; and a few months after his second marriage, he broke with the Communist Party. (His "I Tried To Be a Communist," published in the Atlantic in 1944, was reprinted in 1949 in The God That Failed, edited by Richard Crossman.) The break freed him from social commitments that were beginning to seem troublesome. In Black Boy, a fictionalized autobiography (book written about oneself), his only commitment is to truth. The book was published in January 1945, and sales reached four hundred thousand copies by March. Wright accepted an invitation from the French government to visit France, and the three-month experience, in sharp contrast to his experience in his own country, "exhilarated" (excited and refreshed) him with a "sense of freedom." People of the highest intellectual and artistic circles met him "as an equal."

Wright, his wife, and daughter moved permanently to Paris, France. Within a year and a half Wright was off to Argentina, where he "starred" in the film version of Native Son. The Outsider, the first of three novels written in France, was deeply influenced by existentialism, a philosophy that stresses the individual experience in the universe, whose most famous spokespersons, Jean Paul Sartre (1905–1980) and Simone de Beauvoir (1908–1986), were Wright's close friends. Following Savage Holiday (1954), a potboiler (a book, that is usually of poorer quality, written to make money), The Long Dream (1958) proved that Wright had been too long out of touch with the American reality to deal with it effectively. None of the novels written in France succeeded. His experiments with poetry did not produce enough for a book.

In 1953 Wright visited Africa, where he hoped to "discover his roots" as a black man. Black Power (1954) combines the elements of a travel book with a passionate political treatise, or formal writing, on the "completely different order of life" in Africa. In 1955 he attended the Afro-Asian Conference in Bandung, Indonesia, and published his impressions in The Color Curtain (1956). Pagan Spain (1956), based on two months in Spain, is the best of his nonfiction works. White Man, Listen (1957) is a collection of four long essays on "White-colored, East-West relations."

In 1960, following an unhappy attempt to settle in England, and in the midst of a rugged lecture schedule, Wright fell ill. He entered a hospital in Paris on November 25 and died three days later. Eight Men (1961), a collection of short stories, and Lawd Today (1963), a novel, were published after his death.

I hate to see anyone use the politically correct approach to History, your defination of "lynch" as being killed because of race is incorrect. "Lynched" is to be put to death, as by hanging, by a mob action without legal sanction, it has absolutely nothing to do with race.
3
Mitchell Zimmerman

No, a sharecropper is certainly not "a poor farmer who shares land with other farmers." A sharecropper is a poor farmer who works land owned by a landowner, who typically kept only half of the crop after expenses (e.g., advances for seed, etc.). Commonly the basis of debt peonage; see for a discussion Wright's own non-fiction work, 12 Million Black Voices (1941).