The American architect Frank Lloyd Wright designed dramatically creative buildings during a career of almost seventy years. His work established the imagery for much of the modern architectural environment.

Frank Lloyd Wright was born on June 8, 1869, in Richland Center, Wisconsin, the first of three children to William, a preacher, and Anna Wright. When he was twelve years old his family settled in Madison, Wisconsin, and Wright worked on his uncle's farm at Spring Green during the summers. After the couple divorced in 1885, Frank lived with his mother, and the two shared a lasting relationship. It was from her that he developed an early love for pure geometric forms and designs, which later influenced his architecture.

Wright developed a passion for the farmland that never left him. He attended Madison High School and left in 1885, apparently without graduating. He went to work as a draftsman, and the following year, while still working, took a few courses in civil engineering at the University of Wisconsin.

In 1887 Wright moved to Chicago, Illinois, worked briefly for an architect, and then joined the firm of Dankmar Adler (1844–1900) and Louis Sullivan (1856–1924). Wright was very much influenced by Sullivan, and, although their relationship ended when Sullivan found out that Wright was designing houses on his own, he always acknowledged Sullivan's influence and referred to him as "lieber meister." In 1893 Wright opened his own office.

The houses Wright built in Buffalo, New York, and in Chicago and its suburbs before World War I (1914–18), when German-led forces pushed for European domination, gained international fame wherever there were avant-garde (having to do with new ideas and techniques) movements in the arts. Similarly, in the United States, Wright's clients were exceptional individuals and small, adventurous institutions, not governments or national corporations. A small progressive private school (Hillside Home School, Spring Green, 1902) and an occasional private, commercial firm (Larkin Company in Buffalo) came to him, but chiefly, his clients were Midwestern businessmen, practical, unscholarly, independent, and moderately successful, such as the Chicago building contractor Frederick C. Robie, for whom Wright designed houses.

Early, Wright insisted upon declaring the presence of pure cubic mass, the color and texture of raw stone and brick and copper, and the sharp-etched punctures made by unornamented windows and doors in sheer walls (Charnley House, Chicago, 1891). He made of the house a compact block, which might be enclosed handsomely by a hipped roof (Winslow House, River Forest, Illinois, 1893). Soon, the delight in the simplicity of a single mass gave way to his passion for passages of continuous, flowing spaces and he burst the enclosed, separated spaces of classical architecture, removed the containment, the sense of walls and ceilings, and created single, continuously modified spaces, which he shaped by screens, piers, and different planes and masses. 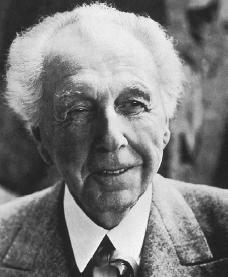 Frank Lloyd Wright.
Reproduced by permission of
Archive Photos, Inc.
and traditional ideas. There was, first, the romantic idea of honest expression: that a building should be faithful in revealing its materials and structure, as Eugène Emmanuel Viollet-le-Duc (1814–1879) had argued, without any classical ornament or fake surface or structure. There was, second, the idea that a building's form should reflect its plan, its functional arrangement of interior spaces, as Henry Latrobe and Horatio Greenough had proposed. There was, third, the belief that each building should express something new and distinctive in the times (G. W. F. Hegel [1770–1831], Gottfried Semper [1803–1879]) and specifically the new technical resources, such as steel skeletons and electric light and elevators, which suggested skyscrapers and new forms of building (John Wellborn Root). There was, fourth, the ambition, even pride, to achieve an art appropriate to a new nation, an American art, without Continental or English or colonial dependencies. Finally, there was the theory derived by Sullivan from Charles Darwin (1809–1882) and Herbert Spencer (1820–1903) that a building should be similar to a biological organism, a unified work of art, rooted to its soil, organized to serve specified functions, and, as a form, evolved as an organism evolves, fitted to its environment, expressive of its purpose.

If the handsome Taliesin East, whose roofs are rhythmical accents on the edge of a bluff overlooking two valleys, were all that Wright left, he would be remembered as the finest architect who worked in the nineteenth-century tradition of romantic domestic design. But, early, he prepared an idea and an imagery for modern design. He achieved in the Larkin Building, Buffalo (1904; destroyed) an integration of circulation, structure, ventilation, plumbing, furniture, office equipment, and lighting.

Always distinctive and independent, Wright's style changed often. For about ten years after 1915 he drew upon Mayan (an ancient Indian tribe in Mexico) ornament (Barndall House, Hollywood, California, 1920). Even then Wright avoided the barrenness and abstraction of his designs, he insisted upon having the multiple form of buildings reflect the movement of unique sites: the Kaufmann House, "Falling Water," at Bear Run, Pennsylvania (1936–37), where interlocked, reinforced-concrete terraces are poised over the waterfall; the low-cost houses (Herbert Jacobs House, Madison, 1937); and the "prairie houses" (Lloyd Lewis House, Libertyville, Illinois, 1940). No architect was more skillful in fitting form to its terrain: the Pauson House in Phoenix, Arizona (1940) rose from the desert, like a Mayan pyramid, its battered wooden walls reflecting the mountains and desert.

Those brilliant rural houses did not reveal how Wright would respond to an urban setting or to the program of a corporate client. But in the Administration Building for the Johnson Wax Company, Racine, Wisconsin (1936–39, with a research tower added in 1950), he astonished architects with his second great commercial building (after the Larkin Building). A continuous, windowless red-brick wall encloses a high, window-lighted interior space; that space, which contains tall columns, is one of the most peaceful and graceful interior spaces in the world. At Florida Southern College he set side-by-side circle and fragmented rhombus (a four-sided plane), recalling Hadrian's Villa at Tivoli, Italy; he set a helix (spiral form structure) inside the Morris Gift Shop in San Francisco, California (1948–49). Ultimately, he conceived of having the helix surround a tall central space: the six-story Guggenheim Museum in New York City (1946–59), which paid in significant functional defects to gain a memorable experience in viewing art, especially where the helix affords views into a side gallery below.

The architectural drawings Wright left behind are magical and lyrical. No one might ever build accordingly, but Wright was never content with the commonplace or ordinary to the conventional or the practical. He imagined the wonderful where others were content with the probable. Wright's drawings suggest how far his talent surpassed any client's capacity fully to realize his dream: a world of sanctuaries and gardens, of earth and machines, of rivers, seas, mountains, and prairies, where grand architecture enables men to dwell nobly.