Tennessee Williams, dramatist and fiction writer, was one of America's major mid-twentieth-century playwrights. He is best known for his powerful plays, A Streetcar Named Desire and Cat on a Hot Tin Roof.

Tennessee Williams was born Thomas Lanier Williams in Columbus, Mississippi, on March 26, 1914, the second of three children of Cornelius and Edwina Williams. His father, a traveling salesman, was rarely home and for many years the family lived with his mother's parents. As a result, the young boy developed a close relationship with his grandfather, and also his older sister, Rose. William's family life was never a happy one. His parents were resentful of each other, his mother once describing her husband as "a man's man" who loved to gamble and drink. When his father obtained a position at a shoe factory, the family moved to a crowded, low-rent apartment in St. Louis, Missouri.

About this time, young Thomas adopted the name Tennessee (presumably because many of his descendants hailed from that state). Williams grew to hate St. Louis. He and his sisters were often ridiculed by other students because of their Southern accent. He also skipped school regularly and did poorly in his studies, preferring instead to escape into the world of reading and writing.

In 1940 the Theatre Guild produced Williams's Battle of Angels in Boston, Massachusetts. The play was a total failure and was withdrawn after Boston's Watch and Ward Society banned it. Between 1940 and 1945 he lived on grants (donated money) from the Rockefeller Foundation and the American Academy of Arts and Letters, on income scraped together from an attempt to write film scripts in Hollywood, and on wages as a waiter-entertainer in Greenwich Village in New York City.

With the production of The Glass Menagerie Williams's fortunes changed. The play opened in Chicago, Illinois, in December 1944 and in New York City in March; it received the New York Drama Critics Circle Award and the Sidney Howard Memorial Award. You Touched Me!, written with Donald Windham, opened on Broadway in 1945. It was followed by publication of eleven one-act plays, 27 Wagons Full of Cotton (1946), and two California productions. When A Streetcar Named Desire opened in 1947, New York audiences knew a major playwright had 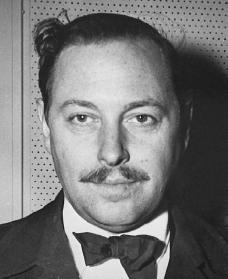 Tennessee Williams.
Courtesy of the
Library of Congress
.
arrived. A Streetcar Named Desire won a Pulitzer Prize. The play combines sensuality, melodrama, and lyrical symbolism (a poetic representation of significant things). A film version was directed by Elia Kazan (1909–) and their partnership lasted for more than a decade.

Although the plays that followed Streetcar never repeated its overwhelming success, they kept Williams's name on theater marquees and in films. His novel The Roman Spring of Mrs. Stone (1950) and three volumes of short stories brought him an even wider audience. Some writers consider Summer and Smoke (1948) Williams's most sensitive play. While The Rose Tattoo (1951) played to appreciative audiences, Camino Real (1953) played to confused ones. Cat on a Hot Tin Roof (1955) was a smashing success and won the New York Drama Critics Circle Award and a Pulitzer Prize.

Baby Doll (an original Williams-Kazan film script, 1956) was followed by the dramas Orpheus Descending (1957), Garden District (1958; two one-act plays, Something Unspoken and Suddenly Last Summer ), Sweet Bird of Youth (1959), Period of Adjustment (1960), and The Night of the Iguana (1961). With these plays, critics charged Williams with publicly trying to solve personal problems, while including confused symbolism, sexual obsessions, thin characterizations, and violence and corruption for their own sake. The Milk Train Doesn't Stop Here Anymore (1963), The Seven Descents of Myrtle (1963; also called Kingdom of Earth ), and In the Bar of a Tokyo Hotel (1969) neither helped Williams's standing with the critics nor proved that Williams's remarkable talent had vanished. Published after his death, Not about Nightingales (1998) had been written in 1938 and was Williams's first full-length play.

Through the 1970s and 1980s, Williams continued to write for the theater, though he was unable to repeat the success of most of his early years. One of his last plays was Clothes for a Summer Hotel (1980), based on passionate love affair between the American writer F. Scott Fitzgerald (1896–1940) and his wife, Zelda.

Two collections of Williams's many oneact plays were published: 27 Wagons Full of Cotton (1946) and American Blues (1948). Williams also wrote fiction, including two novels, The Roman Spring of Mrs. Stone (1950) and Moise and the World of Reason (1975). Four volumes of short stories were also published. One Arm and Other Stories (1948), Hard Candy (1954), The Knightly Quest (1969), and Eight Mortal Ladies Possessed (1974). Nine of his plays were made into films, and he wrote one original screenplay, Baby Doll (1956). In his 1975 tell-all novel, Memoirs, Williams described his own problems with alcohol and drugs and his homosexuality (the attraction to members of the same sex).

Williams died in New York City on February 25, 1983. In 1995, the United States Post Office commemorated Williams by issuing a special edition stamp in his name as part of their Literary Arts Series. For several years, literary enthusiasts have gathered to celebrate the man and his work at the Tennessee Williams Scholars Conference. The annual event, held along with the Tennessee Williams/New Orleans Literary Festival, features educational, theatrical and literary programs.

What is the correct date of birthday of Tennessee Williams ? 1911 or 1914 ?
Thanks,
John
Rio de Janeiro
Brasil