Tutankhamen was the twelfth king of the eighteenth Egyptian dynasty (reigned 1361–1352 B.C.E. ). Although his reign was relatively unimportant, Tutankhamen became the most famous of the pharaohs (Egyptian kings) when his treasure-filled tomb was discovered in the early twentieth century. The vast and untouched contents of his tomb offered historians great insight into the ancient Egyptian culture.

Little is known of Tutankhamen's childhood; even the identity of his parents remains a mystery. Historian believe Tutankhamen was the son of either Amenophis III or Akhenaten. His mother was probably one of the king's many wives, most likely Kiya, a wife of Akhenaten who was often referred to as the "Greatly Beloved Wife."

Tutankhamen was only a child when he became king, for although he reigned eight full years, examination of his body has shown that he was little more than eighteen years old at the time of his death. He may have owed his rise to king to his marriage to Ankhnesamun, the third daughter of the fourteenth century Egyptian rulers, Ikhnaton and Nefertiti. The couple would have no children.

Tutankhamen had originally been named Tutankhaten, meaning "gracious life is Aton," but both he and Ankhnesamun (originally Ankhnespaten) dropped from their names all references to the sun god Aten and the cult (a religious following) that was promoted by Akhenaten. He then became known as Tutankhamen, "gracious life is Amon (an Egyptian god)." Soon after, the royal couple abandoned Amarna, the city built by Akhenaten for the sole worship of Aten. Tutankhamen apparently left the city very early in his reign, for, with the exception of a few scarabs (Egyptian beetles that were inscribed and buried alongside mummies), no trace of him has been found at Amarna.

The reign of King Tutankhamen

The addition to Tutankhamen's label as "Ruler of Southern On" shows that he regarded Thebes as his capital city. There can be little doubt that he made every effort to satisfy the supporters of the god Amun; a stele (statue) erected near the Third Pylon of the temple of Karnak depicts Tutankhamen offering to gods Amun and Mut. The accompanying text tells of the state of decay into which the temples and shrines of the gods had fallen 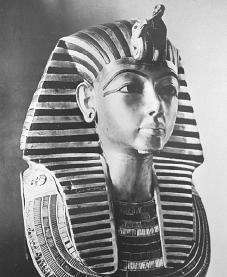 Tutankhamen.
Courtesy of the
Library of Congress
.
during the period of Aten. Tutankhamen had a large hall at Luxor decorated with reliefs illustrating the festival of Amen-Re.

Despite the existence of the standard paintings of the pharaoh slaying his foes, it is doubtful that Tutankhamen engaged in any serious military operations. Tutankhamen was a trained archer and in his tomb were found many trophies from his hunts.

There is some indication that the actual power behind the throne was an elderly official named Ay, who is depicted on a fragment of gold leaf with Tutankhamen. On another fragment Ay bears the title of vizier, or high government official. He had already posed as a coregent (coruler) before the death of Tutankhamen. After Tutankhamen's death, Ay married his widow. The cause of Tutankhamen's death is unknown, although, due to skull damage found in his remains, many believe he was assassinated.

The tomb of Tutankhamen

Tutankhamen is probably the best-known of the pharaohs, owing to the fortunate discovery of his treasure-filled tomb virtually intact. His burial place in the Valley of the Kings had escaped the fate of the tombs of other ancient Egyptian kings. Fortunately, the entrance was hidden from tomb raiders by debris heaped over it during the cutting of the later tomb of the twelfth century B.C.E. King Ramses VI. In 1922 Howard Carter (1873–1939) discovered Tutankhamen's tomb after searching for nearly ten years. Tutankhamen's tomb remains as one of the greatest and most important discoveries in archeology (the study of ancient forms of life). From Carter's discovery, historians were able to piece together the life of King Tutankhamen.

The tomb room contained more than five thousand objects, many of which were covered with gold and beautifully carved. The most famous of these objects is probably the lifelike gold mask that covered the face of Tutankhamen's mummy. Carter also uncovered military items, clothing, jewelry, and many statues of Tutankhamen and Egyptian gods. In fact, there were so many items in the tomb that many are still being examined today and have yet to be displayed in museums—nearly eighty years after their discovery.

I think it was interesting but you did skip alot of his life out... If you can I think like britany add more facts and this artical would be lots of learning tools.