Tu Fu was a great Chinese poet of the T'ang dynasty, a family that ruled China from 618 to 907. He is known as a poet-historian for his portrayal of the social and political disorders of his time and is also noted for his artistry and craftsmanship.

The life of Tu Fu

Born in Kung-hsien, Honan, of a scholar-official family, Tu Fu lost his mother in early childhood. His father, a minor district official, remarried, and the boy lived for some time with his aunt in Loyang, the eastern capital. In his youth he traveled widely in the Yangtze River and Yellow River regions. He first met the poet Li Po (c. 701–762) in 744 in North China and formed a lasting friendship with him. In 746 Tu Fu went to Ch'ang-an, the capital, in search of an official position, but he failed to pass the literary examination or to win the support of influential people. In 751 he sent a fu (rhymed prose) composition to the emperor for each of three grand state ceremonials. While the emperor appreciated Tu Fu's literary talents, he failed to award the poet an office or payment.

After a long, uneventful wait in Ch'angan, where Tu Fu's resources were exhausted and his health declined, he was offered a minor position at court. Just then the An Lushan rebellion broke out (December 755). The country was thrown into chaos when rebels tried to overthrow the T'ang Dynasty. The rebels captured Tu Fu, but he escaped. He lived the life of a refugee (someone forced away from home for political reasons) for some time before he was able to join the new emperor's court in exile, a court set up in foreign lands after being ousted. As a reward for his loyalty, he was appointed "Junior Reminder" in attendance upon the emperor. In late 757 he returned with the court to Ch'ang-an, which had been recovered from the rebels, but he did not stay there long. He had offended the emperor with his advice and was banished (sent away) to a provincial post, or a remote border post. He soon gave it 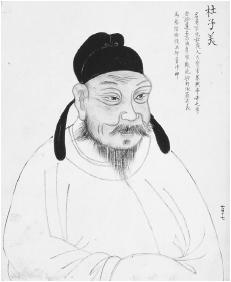 Tu Fu.
Reproduced by permission of the
Picture Desk, Inc.
up and in the fall of 759 started a long journey away from the capital.

Tu Fu spent the next nine years (759–768), the most fruitful period of his poetic career, in various cities in Szechwan, China. He settled down with his family in Ch'eng-tu, the provincial capital, where he built a thatched cottage and led a quiet, happy, though still extremely poor life. Occasionally he had to go from one city to another to seek employment or to escape uprisings within the province. For a year or so, he was appointed by Yen Wu, the governor general of Ch'eng-tu district, as military adviser in the governor's headquarters and assistant secretary in the Board of Works. Upon Yen Wu's death in 765, Tu Fu left Ch'eng-tu for a trip that took him to a number of places along the Yangtze River. Three years later he reached Hunan. After having roamed up and down the rivers and lakes there for almost two years (768–770), he died of sickness on a boat in the winter of 770.

The rich and varied experiences in Tu Fu's life went into the making of a great poet. His works reveal his loyalty and love of the country, his dreams and frustrations, and his sympathy for the sad status of the common people. He was an eyewitness to the historical events in a critical period that saw a great, prosperous nation ruined by military rebellions and wars with border tribes. Eager to serve the country, Tu Fu was helpless in stopping its disasters and could only faithfully record in poems his own observations and feelings. While some of his poems reflect his mood in happier moments, most of them tell of his poverty, his separation from and longings for his family, his terrible life during the war, and his encounters with refugees, draftees, and recruiting officers.

Tu Fu possesses a remarkable power of description, with which he clearly presents human affairs and natural scenery. Into his poetry he introduces an intense, dramatic, and touching personalism through the use of symbols and images, irony and contrast. Above all, he has the ability to rise above the world of reality to the world of imagination. An artist among poets, he excelled in a difficult verse-form called lü-shih (regulated verse), of which he is considered a master.

i just wanted to comment about the contributions of tu fu. why are there no literature about a poem entitled travelers? please answer my question as soon as possible. thnk you for your kind consideration