George Bernard Shaw was born in Dublin, Ireland, on July 26, 1856, the son of George Carr Shaw and Lucinda Elizabeth Gurly. His father was the co-owner of a corn mill and had a drinking problem. Shaw was tutored in classics by an uncle, and when he was ten years old, he entered the Wesleyan Connexional School in Dublin. Shaw hated school but loved reading and writing. He also learned a great deal about music and art from his mother, a music teacher and singer.

Shaw took a job as an office boy in 1871 at a monthly salary equal to $4.50. He resigned in 1876 to join his mother and two sisters in London, England, where they ran a music school. At the age of sixteen Shaw had started writing criticism and reviews for Irish newspapers and magazines; in four years only one piece was accepted. Shaw continued to write criticism while supported by his mother; he also entertained the London society as a singer.

Between 1876 and 1885 Shaw wrote five novels. Immaturity, the first, remained unpublished for fifty years, and the other four appeared in various magazines. An Unsocial Socialist (1884) was designed as part of a massive projected history of the entire social reform movement in England. Cashel Byron's Profession (1882) was produced in 1901 as the drama The Admirable Bashville; or, Constancy Unrewarded. The Irrational Knot was a description of modern marriage that was similar to Henrik Ibsen's (1828–1906) A Doll's House. It appeared in a magazine called Our Corner, as did Love Among the Artists (1887–88). 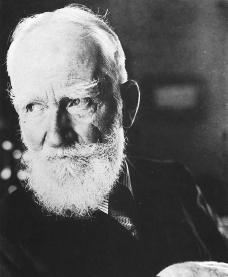 George Bernard Shaw.
Courtesy of the
Library of Congress
.
of production are owned by the people) discussion group, and he joined the socialist Fabian Society in 1884. Fabian Essays (1887), edited by Shaw, discussed the importance of economics (the study of the production, distribution, and use of goods and services) and class structure. In 1882 two events completed Shaw's conversion to socialism: he heard a speech by Henry George, the American author of Progress and Poverty, and he read Karl Marx's (1818–1883) Das Kapital. In 1914 Shaw published Common Sense about the War, a criticism of the British government. The Intelligent Woman's Guide to Capitalism and Socialism, published in 1928, remains a major volume of socialist thought.

Between 1888 and 1894 Shaw wrote for newspapers and magazines as a music critic. At the end of this period, he began writing regularly for the Saturday Review; as a critic, he helped introduce Ibsen to the British public. Shaw's Quintessence of Ibsenism appeared in 1890, The Sanity of Art in 1895, and The Perfect Wagnerite in 1898. He married Charlotte Payne-Townshend, a fellow socialist, in 1898. She died in 1943.

Widowers' Houses, Shaw's first play, was produced in 1892. He identified this and his other early plays as "unpleasant." Shaw's first stage successes, Arms and the Man and Candida, were produced in 1894. You Never Can Tell, first produced in 1896 and not often performed, is Shaw's most underrated (not highly valued) comedy. The productions at the Royal Court Theater in London of the works of Shaw, Shakespeare, and Euripides (484–406 B.C.E. ) between 1904 and 1907 increased Shaw's popularity; eleven of his plays received 701 performances.

Major Barbara (1905) is a drama of ideas, largely about poverty and capitalism (a system in which prices, production, and distribution of goods are determined by competition in a free market); like most of Shaw's drama, the play poses questions and finally contains messages or arguments. Androcles and the Lion (1911) discusses religion. Heartbreak House deals with the effects of World War I (1914–18; a war fought between the German-led Central Powers and the Allies: England, the United States, Italy, and other nations) on England; written between 1913 and 1916, it was first produced in 1920. Shaw's plays explored such topics as marriage, parenthood, and education. Most of his plays after Arms and the Man begin with long essays that are often not directly related to the drama itself.

Shaw's popular success was coupled with growing critical respect. Heartbreak House, Back to Methuselah (1921), Androcles and the Lion, and Saint Joan (1923) are considered his best plays. Shaw was awarded the 1925 Nobel Prize for literature. He continued writing drama until 1947, when he completed Buoyant Billions at the age of ninety-one. He died in his home at Ayot St. Lawrence, England, on November 2, 1950.