English novelist Mary Shelley is best known for writing Frankenstein, or The Modern Prometheus (1818) and for her marriage to the poet Percy Bysshe Shelley (1792–1822).

Mary Wollstonecraft Godwin was born on August 30, 1797, in London, England. She was the only daughter of Mary Wollstonecraft, the early feminist (one who works on behalf of women's rights) and author of A Vindication of the Rights of Woman, and William Godwin, the political writer and novelist, both of whom objected to the institution of marriage. Ten days after Mary's birth, Wollstonecraft died from complications, leaving Godwin, a self-absorbed intellectual, to care for both Mary and Fanny Imlay, Wollstonecraft's daughter from an earlier relationship.

Mary's home life improved little when four years later her father married his next-door neighbor, Mary Jane Clairmont, who already had two children of her own. The new Mrs. Godwin favored her own children over the daughters of the celebrated Wollstonecraft, and Mary was often alone and unhappy. She was not formally educated, but she read many of her mother's books and absorbed the intellectual atmosphere created by her father and such visitors as the poet Samuel Taylor Coleridge (1772–1834). Young Mary's favorite retreat was Wollstonecraft's grave in the St. Pancras churchyard, where she went to read and write, and eventually, to meet her lover, Percy Shelley (1792–1822).

An admirer of Godwin, Percy Shelley visited the author's home and briefly met Mary when she was fourteen, but their attraction did not take hold until a meeting two years later. Shelley, twenty-two, was married, and his wife was expecting their second child, but he and Mary, like Godwin and Wollstonecraft, believed that ties of the heart were more important than legal ones. In July 1814, one month before her seventeenth birthday, Mary ran away with Percy, and they spent the next few years traveling in Switzerland, Germany, and Italy. Percy's father, Sir Timothy Shelley, cut off his son's large allowance after the couple ran away together.

In 1816 Mary's half-sister Fanny committed suicide; weeks later, Percy's wife, Harriet, drowned herself. Mary and Percy were married in London in an unsuccessful attempt to gain custody of his two children by Harriet. Three of their own children died soon after birth, and Mary fell into a deep depression that did not improve even after the birth in 1819 of Percy Florence, her only surviving child. The Shelleys' marriage suffered, too, in the wake of their children's deaths, and Percy formed romantic attachments to other women.

Despite these difficult circumstances, Mary and Percy enjoyed a large group of friends, which included the poet Lord Byron (1788–1824) and the writer Leigh Hunt (1784–1859). They also maintained a schedule of very strict study—including classical and European literature, Greek, Latin, and Italian language, music and art—and other writing. During this period Mary completed Frankenstein, the story of a doctor who, while trying to discover the secret of life, steals bodies 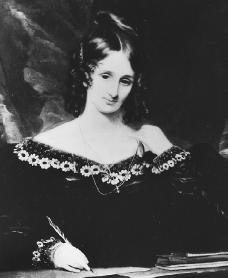 Mary Shelley.
Reproduced by permission of the
Corbis Corporation
.
from graves in an attempt to create life from the parts—but instead creates a monster.

While most early reviewers criticized what they considered the gruesome (inspiring horror) elements in Frankenstein, many praised the author's imagination and powers of description. In the later nineteenth century and throughout Frankenstein criticism, critics have searched for Percy Shelley's influence on the book. Scholars have also debated the value of the additional narratives that he encouraged his wife to write. While some have praised the novel's resulting three-part structure, others have argued that these additions take away from and merely pad the story. Many have also noted the influence of Shelley's father's social views in the book; in addition, some critics claim to have found links to his fiction.

Mary Shelley's journal entries reveal that during 1816 and 1817, when Frankenstein was being written, she and her husband discussed the work many times. It is also known that in these years she and Shelley both read John Milton's (1608–1674) Paradise Lost, and that she was interested at this same time in Godwin's Political Justice, Thomas Paine's (1737–1809) The Rights of Man, and Aeschylus's (525–456 B.C.E. ) Prometheus Bound. This is not to say that Mary Shelley borrowed her social and moral ideas from Paine, or from Shelley or Godwin. It is perfectly understandable that she shared the social thoughts of her father and her husband and that she wove these ideas, which were shared also by many of the enlightened English public during those years, into a pattern of her own making.

Life as a widow

The Shelleys were settled near Lenci, Italy, in 1822 when Percy Shelley drowned during a storm while sailing to meet Leigh Hunt and his wife. After a year in Italy, Mary returned to England for good with her son. After Percy's death Mary struggled to support herself and her child. Sir Timothy Shelley offered her some support, but he ordered that she keep the Shelley name out of print; thus, all her works were published without her name on them. Mary contributed a series of biographical and critical sketches to Chamber's Cabinet Cyclopedia and published several short stories.

Mary Shelley also produced five more novels, which received negative criticism for being too wordy and having awkward plots. The Last Man (1826) is her best-known work after Frankenstein. This novel, in which she describes the destruction of the human race in the twenty-first century, is noted as an inventive description of the future and an early form of science fiction. Valperga (1823) and The Fortunes of Perkin Warbeck (1830) are historical novels that have received little attention from book critics, while Lodore (1835) and Falkner (1837), thought by many to be autobiographical (based on her own life), are often examined for clues to the lives of the Shelleys and their circle.

The Shelleys' situation improved when Sir Timothy increased Percy Florence's allowance with his coming of age in 1840, which allowed mother and son to travel in Italy and Germany; their journeys are recounted in Rambles in Germany and Italy in 1840, 1842, and 1843 (1844). Too ill in her last few years to complete her most cherished project, a biography of her husband, Mary Shelley died at age fifty-three.

Mary Shelley's stories were collected and published after her death, as was Mathilda, a short novel that appeared for the first time in the 1950s. The story of a father and daughter's attraction, it has been viewed as a fictional treatment of her relationship with Godwin. The verse dramas Proserpine and Midas (1922) were written to accompany one of Percy Shelley's works and have earned mild praise for their poetry. Critics also admire Mary Shelley's nonfiction, including the readable, though now dated, travel volumes; the vigorous essays for Chamber's Cabinet Cyclopedia; and her notes on her husband's poetry.