The English playwright, poet, and actor William Shakespeare was a popular dramatist. He was born six years after Queen Elizabeth I (1533–1603) ascended the throne, in the height of the English Renaissance. He found in the theater of London a medium just coming into its own and an audience eager to reward talents of the sort he possessed. He is generally acknowledged to be the greatest of English writers and one of the most extraordinary creators in human history.

William Shakespeare was born on April 23, 1564, in Stratford-upon-Avon, England. His mother, Mary Arden, was the daughter of a wealthy landowner from a neighboring village. His father, John, was a maker of gloves and a trader in farm produce. John also held a number of responsible positions in Stratford's government and served as mayor in 1569.

Though no personal documents survive from Shakespeare's school years, he probably attended the Stratford grammar school and studied the classics, Latin grammar and literature. It is believed that he had to discontinue his education at about thirteen in order to financially help his father. At eighteen he married Ann Hathaway. They had three children, Susanna, Hamnet, and Judith.

There are no records of Shakespeare's activities between 1585 and 1592. Some have speculated (guessed) that he was a traveling actor or a country schoolmaster. The earliest surviving mention of his career in London, England, is a jealous attack by Robert Greene, a playwright, which indicates that Shakespeare had already established himself in the capital. It is hard to believe that even Shakespeare could have shown the mastery evident in his plays without several years of apprenticeship (the period of time a person works to learn a skill).

Three early comedies demonstrate that Shakespeare had learned to fuse conventional characters with convincing representations of the human life he knew. Shakespeare's first play is probably The Comedy of Errors (1590). Most acknowledge it as a brilliant and intricate farce (a humorous piece of work with a story unlikely to happen in real life) involving two sets of identical twins. The plot of his next comedy, The Two Gentlemen of Verona (1591) revolves around a faithful girl who educates her fickle (inconsistent) lover. It has romantic woods, a girl dressed as a boy, sudden changes, music, and happy marriages at the end. The last of the first comedies, Love's Labour's Lost (1593), deals with three young men who attempt to withdraw from the world and women for three years to study in their king's school. They quickly surrender to a group of young ladies who come to live nearby.

Though little read and performed today, Shakespeare's first plays in the popular history genre (particular style) are equally ambitious and impressive. Henry VI (1592), which is performed in three parts, and Richard III (1594) form an epic (story of heroic figures). They deal with the tumultuous (disorderly, agitating) events of English history between the death of Henry V (1387–1422) in 1422 and Henry VII (1457–1509) assuming the 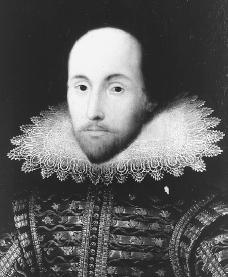 William Shakespeare.
Reproduced by permission of
AP/Wide World Photos
.
throne in 1485, which began the period of stability maintained by Queen Elizabeth I (1533–1603). Nothing so ambitious as this monumental sequence had ever before been attempted in an English play.

Shakespeare's first tragedy, Titus Andronicus (1593), reveals similar ambition. It is recognized as a brilliant and successful piece in the tradition of the revenge play where someone tries to punish someone for a wrong that was done.

The theaters were closed because of plague (a bacteria-caused disease that spreads quickly and can cause death) during much of 1593 and 1594. At this time Shakespeare wrote two narrative poems for the Earl of Southampton. Both the seriocomic (both happy and sad) Venus and Adonis and the tragic Rape of Lucrece are based on the Renaissance traditions of myth and symbolism.

Shakespeare's most famous poems are the 154 sonnets. They were probably composed in this period but were not published until 1609. Sonnets are fourteen-line poems with a fixed rhyme scheme. Though they often suggest autobiographical revelation (the discovery or realization in oneself), the sonnets cannot be proved to be any less fictional than the plays.

In 1594 Shakespeare became principal writer for the successful Lord Chamberlain's Men in London. This was one of the two leading companies of actors. He also became a regular actor in the company and a partner in the group of artist-managers who ran it. The company performed regularly in unroofed but elaborate theaters that seated up to three thousand people. The actors performed on a huge platform stage equipped with additional levels for performances. The audience sat on three sides or stood on the ground in front of the stage. In 1599 this group had the Globe Theater built on the south bank of the Thames River.

Shakespeare produced many plays for the company. They include the comedies The Taming of the Shrew (1594) about the taming of an ill-tempered, scolding woman and A Midsummer Night's Dream (1595), in which fairies and magic potions in moonlit woods become entangled with young lovers who escape from a cruel society. These were followed by The Merchant of Venice (1596), Much Ado about Nothing (1598), The Merry Wives of Windsor (1599), and As You Like It (1600).

Shakespeare's tragedies of the period are among his most familiar plays: Romeo and Juliet (1596), Julius Caesar (1599), and Hamlet (1601). Although very different from each other, they share the setting of intense personal tragedy in a large world vividly populated by what seems like the whole range of humanity. Like most of his contemporaries in the theater, Shakespeare used the same techniques in writing comedies as tragedies. Politics are constantly present, and what is best in the protagonist (hero) is what does him in when he finds himself in conflict with the world.

Shakespeare, continuing his interest in the historical play, wrote King John (1596). Despite its one strong character it is a relatively weak play. His other epics range from Richard II (1595), through the two parts of Henry IV (1597), to Henry V (1599). These four plays pose disturbing questions about politics, particularly the difference between the man capable of ruling and the man worthy of doing so. They are not optimistic about man as a political animal.

Several plays produced at the end of Elizabeth's reign are often grouped as Shakespeare's "problem plays." They are not easily categorized as either tragedies or comedies. All's Well That Ends Well (1602) is a romantic comedy with qualities that seem bitter to many critics because it presents romantic relations between men and women in a harsh light. Troilus and Cressida (1602), is a brilliant, sardonic (skeptically humorous), and disillusioned piece on the Trojan War. Measure for Measure (1604) focuses on the link between political power and romantic desire.

King's Men and the late tragedies

Upon ascending to the throne in 1603, King James I (1566–1625) bestowed his patronage upon the Lord Chamberlain's Men, so that the flag of the King's Men now flew over the Globe. During his last decade in the theater Shakespeare was to write fewer but perhaps even finer plays. Almost all the greatest tragedies belong to this period, and they share several qualities. The heroes are dominated by passions that make their moral (having to do with right and wrong) status increasingly ambiguous (not clearly one thing or another) and their freedom increasingly constricted. In the end, what destroys the hero is what is best about him. Like the histories, the late tragedies continue to be felt as intensely relevant to the concerns of modern men.

Othello (1604) is concerned with trust and betrayal. In King Lear (1605) an aged king foolishly deprives his only loving daughter of her heritage in order to leave everything to her hypocritical (only pretending to have morals) and vicious sisters. Macbeth (1606) concentrates on the problems of evil and freedom. It mingles the supernatural with history, and makes a sympathetic hero of a murderer who sins against family and state.

Antony and Cleopatra and Coriolanus (both written in 1607 and 1608) embody Shakespeare's bitterest images of political life. Antony and Cleopatra sets the temptation of romantic desire against the call to Roman duty. Coriolanus pits a protagonist (hero) who cannot live with hypocrisy (pretending to believe in something) against a society built on it. Both of these tragedies present ancient history with a vividness (intensity) that makes it seem contemporary.

A final group of plays takes a turn in a new direction. Pericles (1607), Cymbeline (1609), The Winter's Tale (1611), and The Tempest (1611) have a unique power to move and are in the realm of the highest art. The Tempest is the most popular and perhaps the finest of the group. In it Prospero and his daughter are shipwrecked on an island inhabited by supernatural creatures. Prospero rules the island with magic, but renounces (gives up) magic at the end. After the composition of The Tempest Shakespeare retired to Stratford. He returned to London to compose Henry VIII and The Two Noble Kinsmen in 1613. Neither seems to have fired his imagination. He died in Stratford-upon-Avon on April 23, 1616, at the age of fifty-two.

Shakespeare's work has continued to seem to each generation like its own most precious discovery. His value to his own age is suggested by the fact that two fellow actors performed the virtually unprecedented (never done before) act in 1623 of gathering his plays together and publishing them in the Folio edition. Without their efforts, since Shakespeare was apparently not interested in publication, many of the plays would not have survived.

Gollob, Herman. Me and Shakespeare: Adventure with the Bard. New York: Doubleday, 2002.