Sequoyah, Cherokee scholar, is the only known Native American to have created an alphabet for his tribe. This advance helped thousands of Cherokee to become literate (able to read and write).

Sequoyah was born at the Cherokee village of Taskigi in Tennessee. His father probably was Nathaniel Gist, a trader. His mother was part Cherokee and was abandoned by her husband before the birth of Sequoyah. He used his Cherokee name until he approached manhood, when he took the name George Guess (as he understood his father's last name to be).

A hunter and fur trader until a crippling hunting accident, Sequoyah became an excellent silversmith (maker of products containing silver). As an adult, he had contact with white people that made him curious about "talking leaves," as he called books. He believed that if the Cherokees had a system for gathering and passing on written information, it would help them keep their independence from white people. In 1809 he decided to master this secret and to apply it to his own language. After a dozen years of ridicule and insults, he invented a Cherokee alphabet of eighty-five or eighty-six characters that allowed every sound used in Cherokee communication to be written down.

In 1821 Sequoyah demonstrated his invention before the Cherokee council, which approved his work. Within two years, thousands of Cherokee had mastered the set of symbols, an advance that led to the printing of books in the Cherokee language as well as some newspapers printed partly in Cherokee. 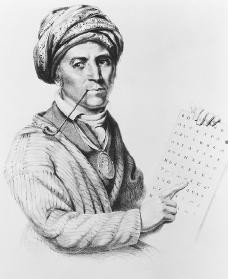 Sequoyah.
Courtesy of the
Library of Congress
.

In 1823 Sequoyah went to Arkansas to teach his alphabet to the Cherokee who already had moved westward, and he moved with them to Oklahoma in 1828. He became somewhat active in tribal politics and was a Cherokee representative to Washington, D.C., in 1828. With his alphabet a success, Sequoyah devoted much of his time to studying other tribal languages in a search for common elements. His tribe recognized the importance of his contribution when, in 1841, it voted him an allowance, which became an annuity (annual payment) of three hundred dollars.

Early in 1843 Sequoyah became interested in finding the part of the Cherokee nation that had reportedly moved west of the Mississippi River prior to the American Revolution (1775–83; when the American colonies fought for their independence from British rule). His journey led him westward and southward. He died in August 1843, possibly in the state of Tamaulipas in Mexico.

Sequoyah was honored by the state of Oklahoma, which placed a statue of him in Statuary Hall of the National Capitol. Also, a redwood tree, the Sequoia, was named in his honor, as was the Sequoia National Park.