Chinese American architect, I. M. Pei, directed for nearly forty years one of the most successful architectural practices in the United States. Known for his dramatic use of concrete and glass, Pei counts among his most famous buildings the East Wing of the National Gallery of Art in Washington, D.C., the John Hancock Tower in Boston, Massachusetts, and the Rock and Roll Hall of Fame Museum in Cleveland, Ohio.

Ieoh Ming Pei was born in Canton, China, on April 26, 1917. His early childhood was spent in Canton and Hong Kong, where his father worked as director of the Bank of China. In the late 1920s, after the death of Pei's mother, the family moved to Shanghai, China, where Pei attended St. Johns Middle School. His father, who had many British banking connections, encouraged his son to attend college in England, but Pei decided to move to the United States in order to study architecture at the University of Pennsylvania. As a youth, Pei watched the growing cityscape in Shanghai, which planted the seeds for his love of architecture. Upon his arrival in 1935, however, he found that the University of Pennsylvania's course work, with its heavy emphasis on fine draftsmanship, was not well suited to his interest in structural engineering. He enrolled instead in the Massachusetts Institute of Technology (MIT) in Boston, Massachusetts.

While at MIT, Pei considered pursuing a degree in engineering, but was convinced by Dean William Emerson to stick with architecture. Pei graduated with a bachelor's degree in architecture in 1940, winning the American 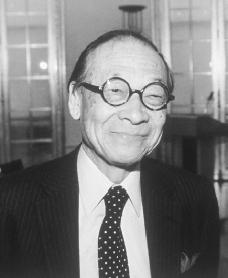 I. M. Pei.
Reproduced by permission of
AP/Wide World Photos
.
Institute of Architects Gold Medal and the Alpha Rho Chi (the fraternity of architects). Pei considered going to Europe or returning to China, but with both regions engulfed in war, he decided to remain in Boston and work as a research assistant at the Bemis Foundation (1940–1941).

From professor to architect

In 1942 Pei married Eileen Loo, a Chinese student recently graduated from Wellesley College. After the wedding Pei moved to Cambridge, Massachusetts, where Eileen enrolled in Harvard's Graduate School of Landscape Architecture. Through her suggestion, Pei enrolled in the Harvard Graduate School of Design in the summer of 1942. There Pei was introduced to the work of Europe's leading architects. He absorbed their ideas about designing unadorned (without decorations) buildings in abstract shapes—buildings that exposed their systems of support and materials of construction.

Pei's work at Harvard was interrupted in early 1943 when he was called to serve on the National Defense Research Committee in Princeton, New Jersey. He maintained his contacts in Cambridge, however, and between 1943 and 1945 formed informal partnerships with two other students of Walter Gropius (1883–1969), E. H. Duhart and Frederick Roth. With these men, Pei designed several low-cost modern houses that were intended to be built of prefabricated (built in advance) plywood panels and "plug-in" room modules. Several of these designs were awarded recognition in Arts and Architecture magazine and thus served to give Pei his first national exposure.

In 1946 Pei was appointed assistant professor after obtaining his master's degree in architecture. While teaching, he worked in the Boston office of architect Hugh Stubbins from 1946 to 1948. Pei's career as a Harvard professor ended in 1948 when, at the age of thirty-one, he was hired to direct the architectural division of Webb and Knapp, a huge New York City contracting firm owned by the wealthy businessman William Zeckendorf. A bold developer with tremendous capital (money from business), Zeckendorf specialized in buying run-down urban lots and building modern high rise apartments and offices.

As architect of Webb and Knapp, Pei oversaw the design of some of the most extensive urban development schemes in the mid-twentieth century, including the Mile High Center in Denver, Colorado, and Hyde Park Redevelopment in Chicago, Illinois (both 1954–1959). These projects gave Pei the opportunity to work on a large scale and with big budgets. Moreover, he learned how to work with community, business, and government agencies. In his words, he learned to consider "the big picture."

His own architectural firm

By mutual agreement, Pei and his staff of some seventy designers split from Webb and Knapp in 1955 to become I. M. Pei & Associates, an independent firm, but one which still initially relied on Zeckendorf as its chief client. It was for Zeckendorf, in fact, that Pei and his partners designed some of their most ambitious works—Place Ville Marie, the commercial center of Montreal, Canada, (1956–1965); Kips Bay Plaza, the Manhattan, New York, apartment complex (1959–1963); and Society Hill, a large housing development in Philadelphia, Pennsylvania (1964).

In terms of style, Pei's work at this time was strongly influenced by Mies van der Rohe (1886–1969). Certainly the apartment towers at Kips Bay and Society Hill owe much to Mies's earlier slab-like skyscrapers sheathed in glass grids. But unlike Mies, who supported his towers with frames of steel, Pei experimented with towers of pre-cast concrete window frames laid on one another like blocks. This system proved to be quick to construct and required no added fireproof lining or exterior sheathing, making it relatively inexpensive. The concrete frames also had the aesthetic (having to do with appearance) advantage of looking "muscular" and permanent.

During the 1960s Pei continued to build "skin-and-bones" office and apartment towers, but he also began to get commissions for other types of buildings that allowed him more artistic expression. Among the first of these was the National Center for Atmospheric Research (NCAR) in Boulder, Colorado (1961–1967). Distinguished by a series of unusual hooded towers, and photogenically (having to do with photo-like qualities) situated against the backdrop of the Rocky Mountains, the NCAR complex helped to establish Pei as a designer of serious artistic intent.

Triangles and curtains of glass

Of Pei's many museums, he became best known for the East Wing of the National Gallery in Washington, D.C. (1968–1978). Located on a distinct but oddly shaped site, Pei cleverly divided the plan into two triangular sections—one containing a series of intimate gallery spaces and the other housing administrative and research areas. He connected these sections with a dramatic sky-lit central court, bridged at various levels by free-floating passageways. Technological advances are seen on the exterior, where space-age rubber gaskets have been inserted between the blocks of marble to prevent cracks from developing in the walls.

Although Pei's reputation was slightly tarnished in the mid-1970s when plates of glass mysteriously fell out of his John Hancock Tower in Boston, Pei was still considered a master of curtain glass construction in the 1980s. He demonstrated this again in the glass-sheathed Allied Bank Tower in Dallas (1985) and later worked on a well-publicized glass pyramid built in the courtyard of the Louvre Museum in Paris (1987). But his magnificent work in glass would not stop there. In September of 1995, The Rock and Roll Hall of Fame Museum was dedicated in Cleveland, Ohio.

Among Pei's numerous awards, he places personal significance on receiving the Medal of Liberty from President Ronald Reagan (1911–) at the Statue of Liberty. To him, it is a symbol of acceptance and respect from the American people. When not designing buildings, Pei enjoys gardening around his home in Katonah, New York. He has four children, two of whom work as architects in his busy office on Madison Avenue.