Pelé, called "the Black Pearl," was one of the greatest soccer players in the history of the game. With a career total of 1,280 games, he may have been the world's most popular athlete in his prime. 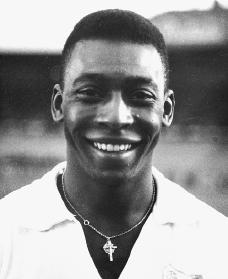 Edson Arantes Do Nascimento, who took the name Pelé, was born on October 23, 1940, in Tres Coracoes, Brazil, the son of a minor league soccer player. Pelé grew up in an extremely poor neighborhood, where one of the only sources of entertainment for a poor boy was to play soccer, barefoot and with a makeshift ball. Many players on the Brazilian soccer fields gained nicknames that had no apparent meaning. His father was dubbed "Dondinho" and young Edson took the name "Pelé," though he does not recall how or why he picked up the name.

Pelé was coached by his father and the hard work soon paid off, for when he was eleven Pelé played for his first soccer team, that of the town of Bauru, Brazil. He moved up in competition with outstanding play and soon was one of the best players on the team. At the age of fifteen his mentor (an advisor), former soccer star Waldemar de Brito, brought him to Sao Paulo to try out for the major league teams. Pelé was quickly rejected. De Brito then took Pelé to Santos where he earned a spot on the soccer team. There, Pelé earned nearly five thousand cruzeiros (about sixty dollars) per month to play soccer. He soon received broader exposure when he was loaned to the Vasco da Gama team in Rio de Janeiro, Brazil.

In 1958 Pelé went to Stockholm, Sweden, to compete in the World Cup championship, the soccer championship that brings together all of the soccer-playing nations for one tournament. His play there helped his country win its first title as Pelé scored two goals in a dramatic 4-2 win over Sweden. He returned to Santos, and his team went on to win six Brazilian titles. In 1962 he again played on the Brazilian team that won the World Cup, but an injury forced him to sit out the contest.

Soccer is a low scoring game, but on November 19, 1969, before a crowd of one hundred thousand in Rio de Janeiro, Pelé scored his one thousandth goal. He lead the Sao Paolo League in scoring for ten straight seasons. He was not only a high scorer, but a master of ball handling as well. It seemed the ball was somehow attached to his feet as he moved down the field.

In 1970 Pelé again played for Brazil's World Cup team, and in Mexico City, Mexico, they beat Italy for the championship. It was Pelé's play, both in scoring and in setting up other goals, that won them the title. When he announced that he would retire from international competition after a game to be played July 18, 1971, plans were made to televise the event throughout the world. By the time he left the game he had scored a total of 1,086 goals.

After Pelé retired, he continued to play until he was signed to play for the New York Cosmos of the North American Soccer League for a reported three-year, $7 million contract. A year later New York was at the top of their division, and in 1977 the Cosmos won the league championship. Pelé retired for good after that victory, but continued to be active in sports circles, becoming a commentator and promoter of soccer in the United States. When the World Cup was played in Detroit, Michigan, in 1994, Pelé was there, capturing the hearts of millions of fans around the world. Later that spring, he married his second wife, Assiria Seixas Lemos. In May of 1997, he was elected Minister of Sports in his home country of Brazil.

On December 11, 2001, the Federation Internationale de Football Association (FIFA) named Pelé, along with Argentina's Diego Maradona, as the men's players of the century.