Anna Pavlova was in her time—and is perhaps even now—the most famous dancer in the world. Pavlova carried on long, globe-covering tours, creating new ballet audiences everywhere.

Anna Pavlova was born on January 31, 1881, in St. Petersburg, Russia, the daughter of Lyubov Feodorovna, a washerwoman. Her father's identity is not known. When Anna was very small, her mother married reserve soldier Matvey Pavlov, who died when Anna was two years old. She and her mother were very poor, and they spent the summers with Anna's grandmother. According to Pavlova, she wanted to be a dancer from the age of eight, when she attended a performance of The Sleeping Beauty at the Maryinsky Theatre. Two years later she was accepted as a student at St. Petersburg's Imperial Ballet School. This school for classical dancers offered its students lifelong material protection; the czar (the ruler of Russia) Alexander III (1845–1894) was its main supporter. In return, the school demanded complete physical dedication.

Although the young Pavlova was considered frail and not exactly beautiful, she was nevertheless very supple (able to bend and twist with ease and grace). Her talents impressed ballet master Marius Petipa, who was to become her favorite teacher. Pavlova also learned from other famous Maryinsky teachers and choreographers (those who create and arrange dance performances) such as Christian Johanssen, Pavel Gerdt, and Enrico Cecchetti, who provided her with a classical foundation based on ballet tradition. Pavlova made her company debut at the Maryinsky in September 1899. Competition among dancers was intense, but Anna Pavlova soon attracted attention with the poetic and expressive quality of her performances. 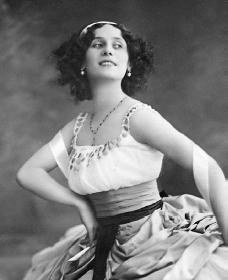 Anna Pavlova.
Reproduced by permission of the
Corbis Corporation
.
thousand miles in the days before air travel and was seen by millions) was to Moscow, Russia, in 1907. In February 1910 Pavlova, performing with the brawny Moscow dancer Mikhail Mordkin (1880–1944), made her first appearance in America, at the Metropolitan Opera House. Most of the American audiences had never before seen classical ballet, and critics did not know how to describe what Pavlova did on stage, although all agreed that it was wonderful.

Although these early tours were undertaken with the czar's consent, Pavlova's final trip to Russia occurred in the summer of 1914. She was traveling through Germany on her way to London, England, when Germany declared itself at war with her homeland in August 1914. Pavlova's protection from and obligations to the czar and his Maryinsky Theatre had come to an end.

From this point until her death, Pavlova continued to make long, exhausting tours, always with her own company—whose members came from different countries and were not always as talented as her—to support. She returned to America several times; she went to South America in 1917; in 1919 she visited Bahia and Salvador. A 1920–21 American tour represented Pavlova's fifth major tour of the United States in ten years, and in 1923 the company traveled to Japan, China, India, Burma, and Egypt. South Africa, Australia, and New Zealand were given a glimpse of Pavlova in 1926, and the years 1927 and 1928 were dedicated to a European tour.

Although Pavlova's performances changed and were influenced by exposure to foreign cultures and new methods of dancing, she remained a somewhat conservative (not trying many new things) performer. Her company continued to perform several of the great ballet classics, such as Giselle and The Sleeping Beauty; her own popular signature pieces were the Bacchanale, a duet created by her former fellow-student Mikhail Fokine, and her eerily beautiful The Swan.

Pavlova's ability to accept her role as spokesperson for her art, often with good humor and always with devotion and poise, brought vast audiences to her and eventually to the ballet itself. She was willing to perform in different venues, from the most famous theaters of Europe to London's music halls or even New York's gigantic Hippodrome. Pavlova's private days were spent at Ivy House in London, where she kept a large collection of birds and animals, including a pair of pet swans. Her companion, manager, and perhaps husband (Pavlova gave different accounts of the exact nature of their relationship) was Victor Dandré, a fellow native of St. Petersburg.

Pavlova died in The Hague, Netherlands, on January 22, 1931. She had performed constantly until her death; her final words were to ask for her Swan costume to be prepared and, finally, "Play that last measure softly."

This is nice and i liek the article or bibliography about anna and her contribution to classical dance.
2
renisa sanichar

this info is good but i need more.
I have to do an assigment on u and i need more info, can someone tell me where can i find that much info on Anna pavolva?
3
julissa

I think that she is an amazing dancer...or at least was once! This website really helped me. Thank you! I am a dancer myself and love reading about her as she is an inspiration to many dancers!:) xx