Arnold Palmer was the first person to make one million dollars playing golf. Palmer attracted legions of fans—known as "Arnie's Army"—who hung on his every shot, celebrating his successes and suffering his failures along with him.

Arnold Daniel Palmer was born in Youngstown, Pennsylvania, the oldest of Milfred "Deacon" Palmer and Doris Palmer's four children. He grew up in nearby Latrobe, Pennsylvania. Palmer's father gave golf lessons at the Latrobe Country Club and gave Arnold his first set of golf clubs when the boy was three years old. Arnold began to sneak onto Latrobe's nine-hole course at every opportunity. He began working as a caddie (one who carries a golfer's clubs) at the age of eleven.

While playing for the Latrobe High School golf team, Palmer lost only one match in four years. During his senior year he met 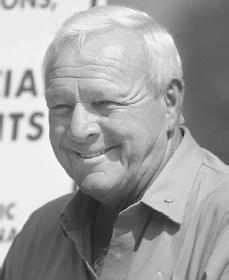 Arnold Palmer.
Reproduced by permission of
AP/Wide World Photos
.
Bud Worsham, whose brother was a professional golfer. At Worsham's urging, Palmer accepted a golf scholarship to Wake Forest College in North Carolina. During Palmer's senior year in college, Worsham was killed in a car accident. Shaken by Worsham's death, Palmer left school and joined the Coast Guard. In 1954 he began selling painting supplies to support his participation in amateur golf. He won the National Amateur championship that year.

Palmer became a professional golfer in November 1954. A month later he married Winnie Walzer, whom he had met while playing in an amateur tournament. In 1955 Palmer won the Canadian Open, earning twenty-four hundred dollars. He captured three tournaments in 1956 and four in 1957, when his earnings of twenty-eight thousand dollars made him the number five money-winner on the tour. Palmer won three tournaments during each of the next two seasons. One of his 1958 victories was the prestigious (honored) Masters, a tournament held every year in Augusta, Georgia.

In 1960, just as golf was beginning to receive regular television coverage, Palmer's spectacular come-from-behind wins in the Masters and the U.S. Open made him a national hero. He won the British Open in 1961 and 1962 and the Masters in 1962 and 1964. Palmer became one of the nation's most famous people. He became involved with many businesses, tried acting in television and movies, and wrote a new golf book every few years. Palmer became the richest athlete in the world, with a yearly income of more than one million dollars.

Although Palmer continued to win tournaments through the 1960s, some believed that his businesses were distracting him from golf. Still, in 1970 the Associated Press (AP) named him Athlete of the Decade (a ten-year period). Palmer won only a few minor Professional Golfers Association (PGA) titles during the 1970s. In 1980 he entered the Senior PGA tour and won the PGA Seniors championship. He also captured the 1981 United States Golf Association (USGA) Senior Open, and he took the PGA Seniors again in 1984. His last victory on the Senior tour was in 1988. In 1994 he made his final U.S. Open appearance in Oakmont, Pennsylvania, where the cheers of his "Army" brought him to tears. A similar scene occurred at his last appearance at the British Open in 1995.

Palmer has received virtually every national award in golf. He had sixty-one wins on the PGA tour, including seven major championships, and he is a member of the World Golf Hall of Fame, the American Golf Hall of Fame, and the PGA Hall of Fame. Palmer also used his fame to benefit charities, serving as Honorary National Chairman of the March of Dimes Birth Defects Foundation for twenty years. He played a major role in raising money to build the Arnold Palmer Hospital for Children and Women in Orlando, Florida. He also established a yearly fund-raising golf event for the Latrobe Area Hospital in 1992.

Palmer underwent surgery for cancer in January 1997. After he recovered, his wife was found to be suffering from a different type of cancer. She died in 1999. Palmer continued his involvement with golf. He testified on behalf of the PGA in a lawsuit brought by golfer Casey Martin, who was suing for the right to use a golf cart to move between holes while playing because of a problem with one of his legs. Palmer and others argued that the cart would give Martin an unfair advantage over other players.

In 1999 Palmer was one of several investors who purchased the Pebble Beach golf course in California for $820 million. In 2001 he was criticized for signing an endorsement contract (payment to a person for public support of a company's products) to promote a golf club that fails to meet USGA regulations. In April 2002 Palmer played in his forty-eighth and final Masters tournament in Augusta.