Mohammad Reza Pahlavi was shah of Iran following his father's reign. He established many reforms to improve the country, but a revolution, led by Ayatollah Ruhollah Khomeini (1900–1989) in 1979, forced him into exile.

Mohammad Reza Pahlavi was born on October 27, 1919. His father, who was then an officer in the Persian Cossack regiment, became shah (king) of Iran as Reza Shah Pahlavi in 1926. Mohammad Reza was proclaimed crown prince at the age of six. From this time on he was carefully educated for his future role as shah by his stern father. In 1931 he was sent to Switzerland to attend Le Rosey school for boys. He was a good student but made few friends because, as a prince, he was not permitted to leave the school grounds. After returning to Iran in 1936, he entered a Tehran military school, graduating in 1938. In 1939 he married Princess Fawzia of Egypt. He developed a love for sports, 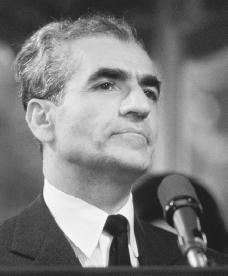 Mohammad Reza Pahlavi.
Reproduced by permission of the
Corbis Corporation
.
enjoying soccer and skiing, and he later became a licensed pilot.

In the fall of 1941 Pahlavi's father was forced to step down from the throne by British and Russian forces who had taken over the country after a short struggle. On September 27, 1941, he replaced his father as Mohammad Reza Shah Pahlavi. This was a confusing and dangerous time for Iran. Not only was World War II (1939–45) being fought, but Iran was squeezed between bitter enemies Russia and Britain. In addition, the vast resources of oil in Iran were eagerly sought by the Russians, the Americans, and the British.

Pressure on Iran from the Soviet Union came from more than one side. The young shah was caught in a struggle between the pro-Soviet Tudeh Party, which wanted social revolution without the shah, and the pro-British National Will Party, which wanted the shah but no social change. The shah himself was not satisfied with either idea. After World War II the Soviet Union refused to remove its forces from Iran as it had promised. Instead the Soviet forces stayed to help a branch of the Persian Communist Party set up a separate government in the northwest province of Azerbaijan. Iran brought this issue to the United Nations (UN). After much discussion the Soviet Union left Azerbaijan in May 1946, and the shah became very popular.

Iran's problems were not over; the oil question had not been solved. The new National Front Party, formed under the leadership of Dr. Mohammad Mosaddeq, stated that since Iran had refused to give oil rights to the Soviet Union, it should take them away from the British. The country was plunged into a crisis and by 1953, communications broke down between the shah and Prime Minister Mosaddeq and also among the prime minister, his cabinet, and the parliament. The crisis, in which the Tudeh Party was gaining the upper hand, forced the shah and Sorayya (his second wife) to leave the country. Nine days later, with U.S. aid, Mosaddeq was overthrown, and the shah returned in triumph.

Pahlavi returned with a new resolve to do things his way. He started what later was called the "White Revolution." After distributing the land among the peasants, he put forests and water under the control of the government, established profit-sharing plans for workers, gave more freedom to women, and established civil service programs. New industries were created, and Iran became one of the most stable countries in the Middle East.

On October 27, 1967, his forty-eighth birthday, and after twenty-six years as shah, Pahlavi was crowned as His Imperial Majesty Mohammad Reza Pahlavi Aryamehr, Shahanshah of Iran. What made this crowning unique in Persian history was that his third wife, Farah, was crowned as empress, the first since the coming of Islam in the seventh century. Their six-year-old son, Reza, was declared crown prince.

During the 1970s, oil-rich countries such as Iran exercised much world power. It was also the strongest military country in the Middle East. However, the shah ruled with unlimited authority and his popularity began to decrease, especially among Muslims who were followers of Ayatollah Ruhollah Khomeini. The Ayatollah led a revolution in 1979, forcing the shah and his family into exile. Mohammed Reza Pahlavi died in Cairo, Egypt, on July 27, 1980.

Shawcross, William. The Shah's Last Ride: The Fate of an Ally. New York: Simon and Schuster, 1988.