The English novelist and essayist, George Orwell, is best known for his satirical (using wit or sarcasm to point out and devalue sin or silliness) novels Animal Farm and Nineteen Eighty-four.

George Orwell was born Eric Arthur Blair in Motihari, Bengal, India, to Richard and Ida Mabel Blair. He had an older sister and a younger sister. His father was a minor customs official in the Indian Civil Service. When Orwell was four years old, his family returned to England, where they settled at Henley, a village near London, England. His father soon returned to India.

As a child, Orwell was shy and lacked self-confidence. He suffered from bronchitis all his life. He spent long hours reading and was especially interested in science fiction, ghost stories, William Shakespeare's (1564–1616) plays, and fiction by Edgar Allan Poe (1809–1849), Charles Dickens (1812–1870), and Rudyard Kipling (1865–1936). When Orwell was eight years old, he was sent to a private preparatory school in Sussex, England. He later claimed that his experiences there determined his views on the English class system. From there he went by scholarship to two private secondary schools: Wellington for one term and Eton for four and a half years.

Orwell then joined the Indian Imperial Police, receiving his training in Burma, where he served from 1922 to 1927. While home on leave in England, Orwell made the important decision not to return to Burma, but to pursue writing. His resignation from the Indian Imperial Police became effective on January 1, 1928. Later evidence suggests that he had come to understand the imperialism for which he was serving, and had rejected it. Imperialism is a political and economic practice whereby a nation increases its power by gaining control or ownership of other territories.

Establishment as a writer

Shortly after making this decision Orwell stayed in Notting Hill, a poor section in London's East End, and in a working-class district of Paris, France. He wrote two novels, both lost, during his stay in Paris, and he published a few articles in French and English. After working as a kitchen porter and dishwasher, and suffering from pneumonia (a lung disease), he returned to his parents' house in Suffolk, England, toward the end of 1929.

Back in England, Orwell earned his living by teaching and by writing occasional articles, while he completed several versions of his first book, Down and Out in London and Paris. This novel recorded his experiences in the East End and in Paris. Because he was earning his living as a teacher when his novel was scheduled for publication, he preferred to publish it under a pseudonym (a made-up name used by an author to disguise his or her true identity). From a list of four possible names submitted to his publisher, he chose "George Orwell."

Orwell's Down and Out was issued in 1933. During the next three years he supported himself by teaching, reviewing, and clerking in a bookshop. In 1934 he published Burmese Days. The plot of this novel concerns personal intrigue (plotting) among an isolated group of Europeans in Burma (a country now known as Myanmar). Two more novels followed: A Clergyman's Daughter (1935) and Keep the Aspidistra Flying (1936).

In the spring of 1936 Orwell moved to Wallington, Hertfordshire, and several months later married Eileen O'Shaughnessy, a teacher and journalist. The Left Book Club authorized Orwell to write an inquiry into the lives of the poor and unemployed. The Road to Wigan Pier (1937) included an essay on class and socialism (a social system in which the production of goods and distribution of wealth is controlled centrally). It marked Orwell's birth as a political writer, an identity that lasted for the rest of his life.

In July 1936 the Spanish Civil War broke out. Orwell arrived in Barcelona, Spain, at the end of autumn and joined the militia (a group of citizens who serve in the armed forces of a country). Orwell was wounded in the middle of May 1937. During his recovery, 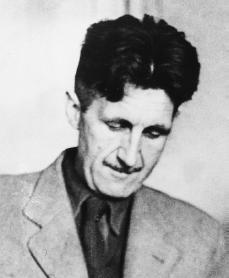 George Orwell.
Reproduced by permission of
Archive Photos, Inc.
the militia was declared illegal, and he fled into France in June. His experiences in Spain had made him into a revolutionary socialist, one who advocated change to a socialist form of society through rebellion of the people.

After Orwell returned to England, he began writing Homage to Catalonia (1938), which describes his disappointment with the Loyalists during the Spanish Civil War. He then wished to return to India to write a book, but he became ill with tuberculosis (a serious disease of the lungs). He was treated in a hospital until late in the summer of 1938. He spent the following winter in Morocco, where he wrote Coming Up for Air (1939). After he returned to England, Orwell authored several of his best-known essays. These include the essays on Dickens and on boys' weeklies and "Inside the Whale."

After World War II (1939–1945; a war fought between the Axis: Italy, Germany, and Japan, and the Allies: England, France, the Soviet Union, and the United States) began, Orwell wanted to enlist. The army, however, rejected him as physically unfit. Later he served for a period in the home guard and as a fire watcher. The Orwells moved to London in May 1940. In early 1941 George Orwell began writing "London Letters" for Partisan Review, and in August he joined the British Broadcasting Corporation (BBC) as a producer in the Indian section. He remained in this position until 1943.

In 1943 Orwell's mother died; he left the BBC to become literary editor of the Tribune; and he began reviewing books on a more regular basis. By February 1944 Orwell had completed Animal Farm, but several publishers rejected it on political grounds. It finally appeared in August 1945. This fable intends to enforce a useful truth, the failure of communism, through animals that speak and act like humans.

Toward the end of World War II, Orwell traveled to France, Germany, and Austria as a reporter. His wife died in March 1945. The next year he settled on Jura off the coast of Scotland, with his youngest sister as his housekeeper.

Although Orwell's health was now steadily falling apart, he started work on Nineteen Eighty-four. Published in 1949, this book is an elaborate satire (a literary work that uncovers the corrupt morals of humans) on modern politics, foretelling a world in which humans are made less than human in a world where citizens are at the mercy of the state's absolute control. Orwell entered a London hospital in September 1949 and the next month married Sonia Brownell. He died in London on January 21, 1950.

Orwell's work is strongly autobiographical (based on the events of his own life) and combines elements of his own middle-class experience with his desire to cause social reform. He was critical of intellectuals whose political viewpoints struck him as superficial. His strong stand against communism (a system in which the government controls all businesses) resulted from his experience of its methods gained as a fighter in the Spanish Civil War.

What were the names of Orwellâ€™s sisters. I have found an original painting by Marjorie Orwell of Nottingham. An internet search makes a link to Eric Blair,