Isamu Noguchi was a well-respected and admired Japanese American sculptor and designer. His sculptures, fountains, and gardens are focal points in major cities of the United States and worldwide.

Isamu Noguchi was born to Isamu Noguchi and Leonie Gilmore on November 17, 1904, in Los Angeles, California. His father, a Japanese poet and authority on art, and his mother, an American writer, were never married. In 1906 he moved with his family to Japan, where his father married a Japanese woman, and Noguchi remained with his mother until he was thirteen years old. In 1918, his mother sent him back to the United States to finish his education. He went to public school in La Porte, Indiana, graduating in 1922. He became an apprentice (a person working to learn a trade) to Gutzon Borglum (1867–1941), the sculptor of Mount Rushmore, who told Noguchi he was not talented enough to be a sculptor. Thus, in 1923, Noguchi enrolled as a premedical student at Columbia University in New York City.

Prophet of his age

In 1925 Noguchi, at the urging of his mother, enrolled at the Leonardo da Vinci Art School in New York City to study sculpture. Here his talents were recognized and encouraged. Noguchi also attended the East Side Art School in New York City. In 1927 he won a scholarship and moved to Paris, France, where he was an apprentice to abstract sculptor Constantin Brancusi (1876–1957) who became a strong influence on Noguchi's art. Noguchi felt that this art form was one that was well suited to his way of expressing himself in his work.

Noguchi lived in Japan for six months in 1930, working with clay and studying gardens. There he realized land could be sculpture that could be put to public use. In the 1930s he made art reflecting his social concerns, including a cement mural, 72 feet long, in Mexico City, Mexico, narrating Mexican history. In 1935 he began making stage sets for dancer Martha Graham (1893–1991), a partnership that would continue for fifty years. Throughout his career, Noguchi also worked with other choreographers (people who develop the dance steps and dances used in performances). In 1938 he made his first sculpture in stainless steel, a symbol of freedom of the press at the entrance to the Associated Press building in Rockefeller Center, New York City.

Noguchi enjoyed occasional exhibitions throughout the United States, Europe, and Asia. Among his important group shows was the exhibition of "14 Americans" at the Museum of Modern Art, New York City, in 1946. A return trip to Japan in 1949 prompted Noguchi to begin direct carving in stone. He also traveled throughout the world, and his work was purchased by many important museums. His only marriage, to actress Yoshiko Yamaguchi, lasted from 1951 to 1955. In 1968 the Whitney Museum of American Art sponsored a show featuring his work, and in 1978 the Walker Art Center exhibited his show Imaginary Landscapes. 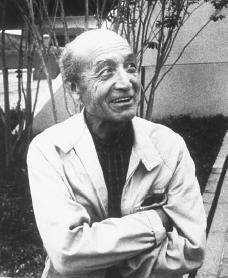 Noguchi's forms seem to suggest nature and human beings interacting with one another or with their surroundings. Like Brancusi, Noguchi always retained in his pieces a strong feeling for the perfection of the material from which they are made. His preference was generally for wood or stone, and he was talented in making use of these materials in a way that showed them at their best.

Noguchi's work was also richly inspired by European surrealism (art that demonstrates the imagination and uses distorted images) and abstraction (art that does not resemble any real object). His experiences in Asia gifted him with a unique ability for garden and courtyard design. Among his many important creations: a fountain and sculpture for the John Hancock Building, New York City; a garden for the UNESCO Headquarters, Paris (1956–1958); the Billy Rose Garden of Sculpture at the Israel National Museum, Jerusalem (1960–1965); a sunken garden at Yale University (1960–1964); and the 1968 Red Cube, a steel sculpture on Broadway in New York City.

Creative to the end

In 1982 Noguchi was awarded the Edward MacDowell Medal for outstanding lifetime contribution to the arts. In 1984, Noguchi's memorial to Benjamin Franklin (1706–1790), the Bolt of Lightning, a 102-foot stainless steel sculpture, was installed in Philadelphia, Pennsylvania. In 1985 the Isamu Noguchi Garden Museum, displaying more than two hundred of his works, opened in Queens, New York.

In 1986, Noguchi ended his long career with a playful signature as the U.S. representative to the Venice Biennale art exposition. His exhibition of sculpture and lamps included the Slide Mantra, a religious-looking marble sculpture which visitors could climb up and slide down.

Noguchi was best known for sculpture, but he worked in many other mediums, including painting, ceramics, interior design, and architecture. His fountains grace several cities. In every work, he remained deeply attuned to his material and sensitive to its connection to nature and to society.

I love Isamu Nouchies sculptures and the famousness he got im guessing he is rich because he is famous and if peole are famous they get alot of money.