The Swedish chemist Alfred Nobel invented dynamite and other explosives, but he is best remembered for using the bulk of his personal fortune to create the Nobel Foundation, which awards Nobel Prizes every year to those who benefit mankind.

Alfred Bernhard Nobel was born October 21, 1833, in Stockholm, Sweden, the son of Immanuel and Andrietta Ahlsell Nobel. He was often sick as a child and had to be attended to almost constantly by his mother. He attended St. Jakob's School in Stockholm in 1841 and 1842, but then the family moved to St. Petersburg, Russia, where Nobel's father, a chemist and inventor, had established an engineering and weapons company. Nobel and his brothers received private tutoring from 1843 to 1850. In 1850 Nobel set out on a two-year tour of western Europe and the United States, learning different languages and seeking ideas and contacts in engineering. Russia's involvement in the Crimean War (1853–56) led to great profits for Nobel's father's company, but after the war ended, weapons contracts were cancelled, and Nobel's father soon lost all of his money.

Alfred Nobel remained in Russia when his father returned to Stockholm in 1858. Both were doing studies of nitroglycerin, a violent explosive liquid. In 1863 Alfred rejoined his father, and in that year he succeeded in exploding nitroglycerin at will by using gunpowder to set it off. In 1865 he introduced the use of exploding mercury to provide the charge for the blast, and this turned out to be the key to all the later high explosives. Nobel patented his invention and traveled around trying to cash in on it. Factories built to manufacture nitroglycerin were established near Stockholm and Hamburg, Germany, and the explosive oil was shipped around the world. In 1866 Nobel visited the United States and built factories in New York and San Francisco, California.

Meanwhile, in Europe, the Nobel companies faced growing criticism, arising from the many accidental explosions that happened when nitroglycerin was being moved or stored. Nobel had expected these problems. As early as 1864 he had tried using different solids to absorb the dangerous liquid, including kieselguhr (a light material made from the remains of certain kinds of algae, a type of plant that grows in water). This material reduced the blasting power slightly, and the resulting product was solid, plastic, and better able to withstand physical or temperature shock. This was dynamite, patented in 1867. The new invention was heavily promoted, and a worldwide industry was established.

After moving the company headquarters and laboratory to Paris, France, in 1870, Nobel continued to work toward developing other explosives. These included ballistite, which was created in 1887 in response to the military 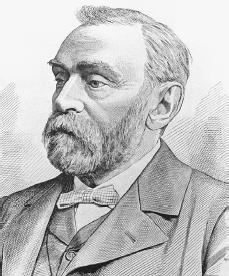 Alfred Nobel.
Courtesy of the
Library of Congress
.
demand for a smokeless, slow-burning blasting powder. This was Nobel's last major invention, but throughout his life he improved on all of his creations in detail, patented them, and then left them to his companies, with which he had as little formal contact as possible.

From 1865 to 1873 Nobel lived in Hamburg and then in Paris until 1891, when the use of ballistite by the Italian military made him unpopular there. He moved to San Remo, Italy, where he died on December 10, 1896. He was a truly international figure, traveling constantly. For all of his achievements, he was a reserved and shy man who hated publicity. He had taken care of his mother his whole life and never married.

Nobel's will directed that the bulk of his huge estate should fund annual prizes for those who, in the previous year, had most benefited mankind in five specified subjects: physics (the study of the relationship between matter and energy), chemistry, medicine, literature, and peace. His will was settled within four years, and the Nobel Foundation was created. A Nobel Prize is one of the highest honors that an individual can receive. Each winner receives a gold medal, a scroll, and a cash award based on the earnings of the foundation's investments during that year. Recent prizes have been around one million dollars each.