Richard Nixon was the thirty-seventh president of the United States. He successfully served as a member of the House of Representatives and of the Senate and was vice president under Dwight Eisenhower (1890–1969). Despite all his political triumphs, Nixon will probably best be remembered as the first president to resign from office.

Richard Milhous Nixon was born on his father's lemon farm in Yorba Linda, California, on January 9, 1913. Of the four other sons in the family, two died in childhood. After the farm failed, the family moved to Whittier, California, where Nixon's father ran a grocery store. Nixon had a troubled childhood. Raised by a sometimes abusive father and a controlling mother, Nixon adopted parts of both his parents' personalities. Some historians have believed that, as a result of his childhood, Nixon had a drive to succeed and felt he had to pretend to be "good" while using any tactics necessary to achieve his goals.

At Whittier College, Nixon excelled as a student and a debater. He was president of his freshman class and, as a senior, president of the student body. Graduating second in his class in 1934, he won a scholarship to Duke University Law School. Although he was a member of the national scholastic law fraternity, he failed to find a job in one of the big New York law firms. This failure, along with the views of his father, left him with a strong dislike of the "eastern establishment."

Shortly before the United States entered World War II (1939–45), where Americanled forces faced-off against Germany, Japan, and Italy, Nixon began working for the federal government in the Office of Emergency Management. Nixon soon left this post and entered the navy as a lieutenant junior-grade in August 1942. He was sent to the Pacific as an operations officer with the South Pacific Combat Air Transport Command. Fourteen months later he returned to the United States to work as a lawyer in uniform.

In September 1945 a group of Republicans in Whittier asked him to run for Congress. He jumped at the opportunity. Nixon left the navy in January 1946 and began his victorious campaign, in which he defeated a five-term congressman.

As congressman, Nixon was assigned to the House Labor Committee and to the Select Committee on Foreign Aid. In 1947 he and other committee members toured Europe. Nixon quickly established a reputation as an internationalist in foreign policy, proving that he worked well with foreign nations.

As a member of the House Un-American Activities Committee (HUAC), Nixon became a leading anti-Communist crusader. (Communism is a political system where goods and services are owned and controlled by the government.) He first attracted national attention as a member of HUAC when he led the suit that resulted in the conviction of Alger Hiss (1904–1996), a former State Department official charged with Communist connections. While Nixon gained national attention fighting the threat of Communism, he also caught the attention of General Dwight Eisenhower (1890–1969), who chose him as his running mate in his successful presidential campaign of 1952. Eisenhower in part recruited Nixon in hopes of drawing valuable support in the West.

As vice president, Nixon continued to please his supporters and anger his critics. He acted as the chief political spokesman in Eisenhower's administration. Among Nixon's assignments was foreign travel. In office less than a year, Nixon made an extended trip through Asia, visiting, among other places, Hanoi, North Vietnam, then under French control. He established many useful relationships on these trips and impressed critics at home with his knowledge of foreign affairs.

On a trip to Latin America in 1958, he was set upon by mobs but handled himself coolly. In 1959 he visited Poland and the Soviet Union, a former Communist nation made up of Russia and other states. While in Moscow, his meeting with Soviet premier Nikita Khrushchev (1894–1971) prepared the way for Khrushchev's later visit to the United States to meet with Eisenhower.

In 1960 Nixon won the Republican presidential nomination and chose Henry Cabot Lodge (1902–1985) as his running mate. The campaign against the Democratic team of Senators John F. Kennedy (1917–1963) and Lyndon Johnson (1908–1973) was close from the beginning. In the first of four televised debates with Kennedy, Nixon did not sharply challenge his opponent and appeared cold and distant, a far cry from the charming Kennedy. But the election was still close, and he lost by some one hundred thousand votes out of the sixty-eight million cast.

After the defeat, Nixon returned to Los Angeles to practice law. In 1964, after the Republican defeat by President Lyndon Johnson, it became clear that Nixon again considered himself a serious presidential contender. In 1968, winning his party's presidential nomination, he picked Governor Spiro T. Agnew (1918–1996) of Maryland as his running mate. Nixon and Agnew ran against the Democratic team of Hubert Humphrey (1911–1978) and Edmund Muskie (1914–). Third-party candidate George Wallace (1919–1998) of Alabama, a threat to both sides, eventually drew support away from Humphrey and cleared a path for Nixon's successful election to the White House.

Nixon took the oath of office on January 20, 1969. In his inaugural address, or first speech as president, he appealed for harmony among American society. At that time American society was divided over the issues of domestic racial unrest and the Vietnam War (1955–75; a war in which American forces were aiding South Vietnam's fight against Communist North Vietnam). He promised to bring the nation together again.

Nixon's first foreign objective—to negotiate, or bargain for, an end to the Vietnam War—was unsuccessful. Despite repeated attempts, negotiations with North Vietnam at the Paris peace talks were unproductive. Meanwhile, in June he began replacing American troops with South Vietnamese troops. After a conference with South Vietnam president Nguyen Van Thieu (1923–2001), Nixon ordered 25,000 American combat troops brought home. By the end of 1969, having ordered 110,000 troops home, he expressed hope that all American combat troops would be out of Vietnam by the end of 1970. It would take two more years until most American ground troops had been withdrawn from Vietnam.

In his second month in office, Nixon embarked on a tour of Western Europe. His official visit to Romania made him the first American president to visit a Communist country. While on an Asian tour, the president called for cooperative efforts and promised American material aid but said that Asian countries must defend their freedoms with their own troops. In his first year, the president signed a treaty with the Soviet Union that worked toward placing limits on the production of nuclear arms.

In 1971 Nixon made the dramatic announcements that he would visit Peking, China, and Moscow, Soviet Union, in the first half of 1972. He also announced progress in the negotiations with the Soviet Union on an arms limitation treaty. The visit to Peking took place in February and he was invited to meet Chairman Mao Zedong (1893–1976), a mark of high respect. 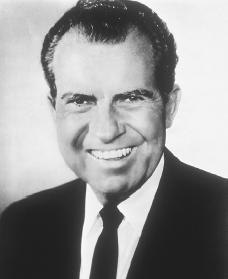 Richard Nixon.
Courtesy of the
Library of Congress
.

The fall from grace

In the presidential election of 1972, Nixon and Agnew ran against Democrats George McGovern (1922–) and Sargent Shriver (1915–). The election was a landslide for Nixon, but no one was expecting what would happen next. During his last election campaign, what first appeared as a minor burglary was to become the beginning of the end of Nixon's political career. A break-in at Democratic national headquarters in the Watergate apartment complex in Washington, D.C., was linked to Republicans.

During the trial of six men charged in the crime, the existence of the cover-up began to emerge and government officials fell like dominos in its path. By October 1973, as the Watergate investigation continued, Nixon lost several top aides as well as his vice president. Agnew resigned before pleading no contest to federal charges of receiving bribes, failing to pay his taxes properly, and other crimes while serving as governor of Maryland.

Soon the U.S. Supreme Court forced Nixon to turn over tape recordings he made during the election. The tapes showed he obstructed, or blocked, justice in stopping a Federal Bureau of Investigations (FBI) probe of the Watergate burglary. On August 9, 1974, in national disgrace, he became the first president of the United States to choose to leave office before the end of his term. He boarded a plane with his wife and returned to his California home, ending his public career. A month later, in a controversial move, President Gerald Ford (1913–) issued an unconditional pardon for any offenses Nixon might have committed while president.

Nixon led a quiet life until the criticism from the Watergate scandal had softened. Nixon then emerged in a role of elder statesman, visiting countries in Asia as well as returning to the Soviet Union and China. He also consulted with the administrations of George Bush (1924–) and Bill Clinton (1946–) and wrote his memoirs, or a book of his memories, and other books on international affairs and politics.

Richard Nixon died of a stroke on April 22, 1994. A state funeral was held five days later in Yorba Linda, where President Clinton and others praised Nixon and his achievements. However Nixon is remembered, he will most likely never escape the shadow of Watergate.

Wicker, Tom. One of Us: Richard Nixon and the American Dream. New York: Random House, 1991.

I didn't think it was intresting but it did get me a A+ on my project for history. =D
3
Naomi

Thank you for having this website. It helped a lot once I could figure out how to put the information into of bibliography of my own, but don't worry. I didn't take the credit when I used some of the information.
4
A W Mcmillan

On this article, I of course appreciate your contribution to history -both domestic and political.
What I disagree with, is your closing statement:"However Nixon is remembered, he will most likely never escape the shadow of Watergate".

As a man that lived trough the hard years of the Cold war, and ponder on the implications of those times, I will forever feel sorry for the approach people take when writing on President Nixon's works, and perhaps unwittingly, yet nevertheless always effectively, end up stigmatizing him with the Watergate affair, as if politics, and politicians, were faultless human beings.

NO DOUBT one of my favourite American pacifists of all times notwithstanding what you may think , I've followed Nixon's career ever since he was the US vice-president under Eisenhower. And his tour to Latin-America, the vilifying personal attacks he suffered, and his endurance -no one seeks to recall- was USA's own embodiment of what classical Communism was ready to inflict upon any American citizen, and upon any of us who didn't play along with the infamous "class struggle" and associated Communist propaganda which still plagues the psyche of the Latino countries.

I've nothing by praise for Richard Nixon and his work, and all Republicans, and why not, even the Tea Party.

Shame on Bernstein and Woodward and the ones like their lot, that in their hatred and self-seeking for fame, wanted to make us believe that so called "Democrat" politicians are, by any standards, morally better, or more successful at government than president Nixon ever was.