Muhammad was the founder of the religion of Islam and of a community at Medina that later developed into the Arab Empire.

Call to be a prophet

Muhammad was born after his father's death in Mecca, Arabia, around 570. His grandfather and mother both died when he was a child. As a child, he was unable by Arab custom to inherit anything. He was therefore relatively poor until about 595, when a wealthy woman, Khadija, asked him to go to Syria as a steward (protector, manager) of her trading supplies. After the successful accomplishment of the mission, she offered him marriage. She was a rich widow fifteen years his senior. She and Muhammad had four daughters, and several infant sons who died. From this time onward Muhammad was wealthy, but he began to spend time in solitary reflection on the problems of Mecca, where religious principles were being degraded and general unrest was in the city.

During a period of solitude around the year 610, Muhammad heard a voice as he meditated (focused his thoughts in a manner of prayer). The voice said, "You are the Messenger of God" (this being the title more frequently given to him by Muslims than that of prophet). Muhammad later decided he had heard the archangel Gabriel. He also found certain words "in his heart" (that is, his mind) as he meditated. Friends helped to convince him that he was called to convey messages from God to the Arabs as Moses (c. 1392– c. 1272 B.C.E. ) and Jesus Christ (c. 6 B.C.E. –c. 30 C.E. ) had done to the Jews and Christians. He continued to receive such messages from time to time until his death. They were collected into chapters and make up the Koran (Qur’an). The Koran, though sent through Muhammad, is held by Muslims to come from God.

At first Muhammad told these messages only to sympathetic friends, but from 612 or 613 he stated them publicly. Many people in Mecca, especially younger men, became followers of Muhammad. These members of his new religion of Islam became known as Muslims. In the course of time, however, resistance to Muhammad appeared among the leading merchants of Mecca, and he and his followers were sometimes mistreated. Apparently to escape the mistreatment, approximately eighty of his followers traveled to Ethiopia. About 616, pressure in the form of a boycott (refusal to trade with) was placed on the clan of Hashim to make it cease protecting Muhammad. But until after the death of the head of the clan, Muhammad's uncle Abu-Talib, it was felt that to abandon him would be dishonorable.

The new head, however, found a justified way to leave Muhammad behind, and it became virtually impossible for Muhammad to continue preaching in Mecca. In September 622, after secret negotiations over the previous two years, he settled in the area of Medina, two hundred miles to the north, where seventy of his followers had already gone. This "emigration" (leaving one's living place for another) is the Hijra (Latin, hegira ), on which the Islamic era is based.

The Arab clans of Medina mostly acknowledged Muhammad's prophethood and entered into association with him and the emigrants (those who leave their country) from Mecca. At first the emigrants depended on Medinese hospitality, but soon small groups of them began to attempt raids on Meccan caravans. Later the Muslims of Medina also joined in. At first the raids had little success, but in March 624 a larger band of just over three hundred, led by Muhammad himself, defeated a supporting force of perhaps eight hundred Meccans with heavy losses. This was a serious blow to Meccan reputation, and the Muslims felt that God was defending Muhammad.

To teach Muhammad a lesson, the Meccans in March 625 invaded the Medinese area with about three thousand men. Many Muslims were killed before they could regain the safety of the hill. Militarily this was not a serious loss for Muhammad, since the Meccans had also suffered casualties and retreated immediately; but the loss shook the belief that God was defending him. Confidence was only gradually restored.

The next major event was the siege of Medina by ten thousand Meccans and allies in April 627. Muhammad protected the central part of the area by a trench that tricked the cavalry. After two weeks Meccans and their allies retreated. In March 628 the Meccans settled the Treaty of al-Hudaybiya with him. The treaty was a triumph for Muhammad. In the following months many nomadic (having to do with moving from area to area) tribesmen and a few leading Meccans joined Muhammad and became Muslims. When the treaty was criticized in January 630, Muhammad was able to march on Mecca with ten thousand men. Muhammad entered Mecca in triumph. Two weeks later two thousand joined Muhammad's army in opposing a concentration of tribesmen east of Mecca and shared in the victory of Hunayn.

By 630 the religion of Islam had become firmly rooted. In the earliest parts of the Koran, it emphasized God's goodness and power and called on men to acknowledge this in worship. It also stated the reality of the Day of Judgment, when men would be assigned to paradise or hell depending on their attitude toward God, their generosity with their wealth, and similar points. These matters were significant to the tensions of Mecca, which were seen as arising from the merchants' overconfidence in their wealth and power. The Koran contained attacks on idols (symbols of objects to be worshipped) and a resolve that "there is no deity but God."

The religious practices of the Muslims included communal worship or prayers several times a day touching the ground with the forehead in acknowledgement of God's majesty. They also gave alms (money to the poor). At Medina the fast (not eating any food) from sunrise to sunset during the month of Ramadan (sacred ninth month of the Islamic calendar) was introduced; and when circumstances made it possible, some of the ceremonies of the traditional pilgrimage (holy journey) to Mecca became a duty for Muslims.

Beyond Medina a system of alliances was gradually built up with the nomadic Arab tribes. As Muhammad grew stronger, he came to insist that those wanting an association should become Muslims. After the conquest of Mecca and the victory at Hunayn in January 630, he was the strongest man in Arabia, and delegations came from tribes seeking alliance with him. When he died on 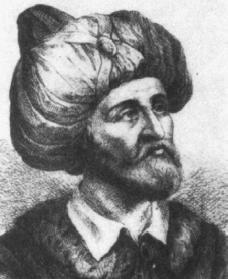 Muhammad.
Courtesy of the
Library of Congress
.
June 8, 632, he was in effective control of a large part of Arabia.

Muhammad is said to have been a fast walker, of sturdy build, with a prominent forehead, a hooked nose, large brownish-black eyes, and a pleasant smile. He showed great charm in his dealings with people and, when appropriate, gentleness and even tenderness. Medieval Europe (500–1500), however, on the defensive against Arab armies and Islamic culture, came to look on him as a monster or demon.

At times Muhammad was indeed harsh to those in his power, but this was not out of keeping with the times. His marital relations—at his death he had nine wives and one concubine (a kept woman without marriage)—must also be judged in the framework of the times. A political purpose can be traced in all of his marriages. For his time he was a man seeking positive change for his people.

Politically Muhammad's greatest achievement was to create the framework that made possible the uniting of the Arab tribes. He also won over his chief Meccan opponents, and their administrative skills were later invaluable in conquering and ruling many provinces. The growth of the Arab Empire, and with it the religion of Islam, was made possible by favorable circumstances; but the opportunity would not have been grasped but for Muhammad's gifts as visionary, statesman, and administrator.

The next major event was the siege of Medina by ten thousand Meccans and allies in April 627. Muhammad protected the central part of the area by a trench that tricked the cavalry. After two weeks Meccans and their allies retreated. In March 628 the Meccans settled the Treaty of al-Hudaybiya with him. The treaty was a triumph for Muhammad. In the following months many nomadic (having to do with moving from area to area) tribesmen and a few leading Meccans joined Muhammad and became Muslims. When the treaty was criticized in January 630, Muhammad was able to march on Mecca with ten thousand men. Muhammad entered Mecca in triumph. Two weeks later two thousand joined Muhammad's army in opposing a concentration of tribesmen east of Mecca and shared in the victory of Hunayn.

On NPR today I heard an interview with someone who discussed the current controversy about the South Park TV comedy show. I did not see the episode in question. But I heard that the show may have displayed an image of Muhammad PBUH, which alledgedly is strictly prohibited by the Islam faith. The display supposedly was not too flattering, unlike your image above. The discussion reignited my recent (last few years) interest in learning more about Islam. I believe that all people world-wide should learn as much as possible about the other major religions. Like many Christians and Jews, it behooves us to know more about Islam, hopefully to dispel many incorrect notions about each others' religions and to increase tolerance for each others' beliefs. Your brief history of Muhammad PBUH, Islam's so-called "Messenger of God" (Prophet?) of Allah (God) was interesting and informative. However, at the bottom of your short biography, you included an image of him, supposedly belonging to a painting at the U.S. Library of Congress. Is that refernce really correct? If so, doesn't their display of him violate Islam's famous prohibition? Or does Islam prohibit only Muslims (Moslems?) from doing so? I tend to feel it is or should be the latter. But I also believe that no one should show him in a disgustingly shameful way, like various cartoons have done recently. I would not want or certainly appreciate non-Christians doing the same thing with the image of my Lord Jesus Christ. But on the other hand, there is our beloved First Amendment of the U.S. Constitution too which I truly believe in. Therefore, I can not in good conscience deny those people their right to freely express themselves!
3
Geoffrey Lampard

This is a theory only, The Bible says that Both Issac and Ishmael were Blessed , how ever Ishmale would not Inherit the same Promise as Issac. Strange thst Israel seems to be so paranoid about the Muslums , dure to the both have a common promise and that is they would both have nations coming out of them. and they were both BLESSED By God Almighty The I am that I am God of Abraham Issac and Joseph. My conclution to the matter is this. Both Jews, Christians and Muslums have been infiltrated by evil to try to stop an end times alianse with each other .
Comparisons: all three have many sectairian groups who have tried to demonise each other. They all have a History linked to the bible. Muhammad seemed to be a good Guy untill he was influemced by sectarianisum with in . etc.
Worth thinking about. PS There are Messianic Jews and Messianic Muslams why not why not defend there rites rather than punish them.
4
Zeaur rahman

The prohibition against pictures in Islam, is younger than Muhammad. There were made paintings also of Muhammad in early Islam. A few of them still exists.