Hosni Mubarak became president of Egypt after the assassination (political murder) of Anwar Sadat (1918–1981). He continued his country's peace with Israel, made efforts to bring peace to the entire Middle East, and cracked down on Islamic groups that participated in terrorist activities.

Hosni Mubarak was born on May 4, 1928 in the Nile delta province of Minufiya. He had four siblings and his father was a minor official in the Ministry of Justice. Mubarak's village of Kafr-El Meselha was known for its schools and had produced four cabinet ministers. Mubarak did well in school and completed primary schooling in his village and secondary studies in the nearby capital of Shibin El-Kom, Egypt, before going on to Egypt's Military Academy and then its Air Academy. He graduated from the Air Academy in 1950, completing his studies in only two years by attending year-round. He became a pilot and received part of his training in the former Soviet Union.

Mubarak was an instructor at the Air Academy and commanded Egypt's bomber force in the Yemen civil war in the 1960s. He was named director of the Air Academy in 1967 and given the important task of rebuilding the air force, which the Israelis had destroyed in the Six Day War of June 1967. Mubarak moved up to air force chief of staff in 1969 and commander in chief in 1972. He helped plan a successful surprise attack on Israeli forces occupying the east 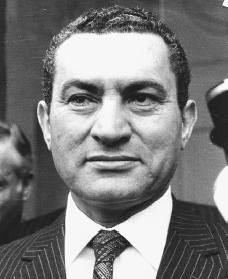 President Sadat named Mubarak vice president in 1975. Sadat preferred the international spotlight to administrative work, so Mubarak took over the day-to-day running of the government, leading cabinet meetings and handling security details. He gained foreign affairs experience with many trips to other countries, including Syria, Iraq, the United States, and China. His experience was important in the talks leading to the 1978 Camp David Accords, agreements signed by Egypt and Israel that ended years of conflict.

Takes over as president

Mubarak escaped with a minor hand wound when Islamic fundamentalists (those who interpret their religious beliefs as law) assassinated Sadat in October 1981. Taking over as president, he moved quickly to crush an Islamic uprising and jailed over two-thousand five-hundred members of militant (engaging in violence) Islamic groups. Mubarak kept most of Sadat's foreign and domestic policies, including the Camp David treaty and Sadat's close ties to the United States. All the Arab states but three had criticized Egypt for the treaty with Israel, so Mubarak tried to rebuild relations with Jordan, Iraq, Saudi Arabia, and Palestine Liberation Organization leader Yasir Arafat (1929–). It was Mubarak who encouraged Arafat to compromise and recognize Israel's right to exist.

Throughout the 1980s Mubarak increased the production of affordable housing, clothing, furniture, and medicine. He also kept a close eye on his officials, firing ministers at the first hint of wrongdoing and fining members of parliament for unnecessary absences. Egypt's heavy dependence on U.S. aid and her hopes for U.S. pressure on Israel for a Palestinian settlement continued under Mubarak. He also quietly improved relations with the former Soviet Union. In 1987 Mubarak won election to a second six-year term.

Mubarak was angered over the 1990 Iraqi invasion of Kuwait, and he sent forty-five thousand troops to help fight back against the Iraqis. In 1993 he was reelected with 96.3 percent of the vote, a sign of the Egyptian people's approval of his stand against Islamic fundamentalists. Plots to assassinate Mubarak had surfaced in 1992, 1993, and 1995, after two policemen were killed in another attack against the president. But Mubarak continued his tough stance. His crackdown led to charges against his government of torture, threats to the press, and other human rights abuses.

In September 1999 Egyptian voters elected Mubarak to a fourth six-year term in office. In 2000 he became the first Egyptian head of state to visit Lebanon since 1952. He also continued his efforts to achieve peace in the Middle East, meeting with Arafat, Israeli Prime Minister Ehud Barak (1942–), and U.S. President Bill Clinton (1946–). During these meetings he urged the foreign leaders to end the violence for the benefit of the entire region. In October 2001 Mubarak ordered hundreds of Islamic militants to stand trial in Egyptian courts for participating in terrorist activities.