Edna St. Vincent Millay was an American lyric (expressing direct and personal feeling) poet whose personal life and verse reflected the attitudes of rebellious youth during the 1920s. 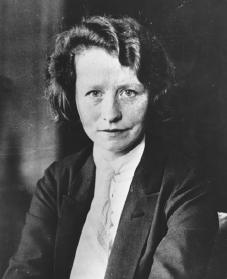 Edna St. Vincent Millay.
Courtesy of the
Library of Congress
.

Edna St. Vincent Millay was born in Rockland, Maine, on February 22, 1892, one of Henry Tollman Millay and Cora Buzzelle Millay's three daughters. Her father worked as a teacher. Edna's parents divorced when she was eight, and she moved with her mother and sisters to Camden, Maine. Her mother worked as a nurse to support the family. She encouraged her daughters to be independent and to appreciate books and music. Edna studied piano and considered a music career, but when one of her first poems appeared in St. Nicholas magazine, she decided to become a writer. "Renascence," a long poem written when she was nineteen, appeared in a collection called The Lyric Year (1912) and remains a favorite. A wealthy friend, impressed with Edna's talent, helped her attend Vassar College in New York.

Following her graduation in 1917, Millay settled in New York's Greenwich Village and began to support herself by writing. Her first volume, Renascence and Other Poems (1917), brought her some attention. She also wrote short stories under the pseudonym (false writing name) Nancy Boyd. A Few Figs from Thistles appeared in 1920. In 1921 she issued Second April and three short plays, one of which, Aria da Capo, is a delicate but effective satire (making fun of) on war.

In 1923 Millay published The Harp Weaver and Other Poems, which won the Pulitzer Prize. She also married Eugen Jan Boissevain, a wealthy Dutchman. In 1925 they bought a farm near Austerlitz, New York. Millay participated in the defense of Nicola Sacco (1891–1927) and Bartolomeo Vanzetti (1888–1927), two Italian anarchists (those who rebel against any authority or ruling power) who had been accused of murdering two men in a Massachusetts robbery. Many people believed that the two men were charged only because they were foreigners and because of their political beliefs. In 1925 Millay was hired to write an opera with composer Deems Taylor (1885–1966); The King's Henchman (1927) was the most successful American opera up to that time. That year, after Sacco and Vanzetti were sentenced to death, she wrote the poem, "Justice Denied in Massachusetts," and also contributed to Fear, a pamphlet on the case.

Millay issued Buck in the Snow (1928), Fatal Interview (1931), and Wine from These Grapes (1934). She tried a dramatic dialogue on the state of the world in Conversation at Midnight (1937), but the subject was beyond her grasp. She returned to the lyric mode in Huntsman, What Quarry (1939). The careless expression of her outrage at fascism (a political movement that places nation and race above the individual and supports a government run by a single leader) in Make Bright the Arrows (1940) took away from its power. The Murder of Lidice (1942) was written in response to the destruction of a Czechoslovakian town by the Nazis (members of the controlling power in Germany from 1933 until 1945). Then Millay began to lose her audience; Collected Sonnets (1941) and Collected Lyrics (1943) did not win it back.

Millay's last years were dogged by illness and loss. Many of her friends died, and her husband's income disappeared when the Nazis invaded Holland during World War II (1939–45; a war in which Germany, Italy, and Japan fought against Great Britain, France, the Soviet Union, and the United States). In 1944 a nervous breakdown kept her in the hospital for several months. Her husband died in 1949; on October 19, 1950, she followed him. Some of her last verse appeared after her death in Mine the Harvest (1954).

Edna St. Vincent Millay's poems' included such topics as sex, the liberated (freed from traditional roles) woman, and social justice. Though she wrote in traditional forms, her subject matter; her mixed tone of unconcerned calm, courage, and extreme force; and her lyric gifts were highly appreciated in her time.

I think that this site should show more about her high school educations and stuff like that..
People that want to do research on Edna Millay need to know all of the information of her life...
If you want people to learn about Edna Millay then update this site..