The English philosopher and economist (someone who studies the buying and selling of goods and services) John Stuart Mill was the most influential British thinker of the nineteenth century. He is known for his writings on logic and scientific method and for his many essays on social and political life.

John Stuart Mill was born the oldest of nine children on May 20, 1806, in London, England, to James and Harriet Burrow Mill. His father, originally trained as a minister, had come from Scotland to take up a career as a journalist. In 1808 James Mill began his lifelong association with Jeremy Bentham (1748–1832), the utilitarian (a philosophy 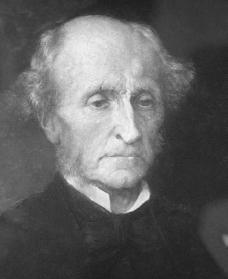 John Stuart Mill.
Courtesy of the
Library of Congress
.
saying that anything useful is positive and that to determine if an action is right, the usefulness of its consequences is the answer) philosopher. Mill shared the common belief of nineteenth-century psychologists that a child's character and performance are the result of the experiences and relationships he or she has as a child. With this view, he attempted to make his son into a philosopher by totally supervising his education.

John began the study of Greek at the age of three and took up Latin between his seventh and eighth years. From six to ten each morning the boy recited his lessons, and by the age of twelve he had mastered material that was equal to a university degree in classics. He then took up the study of logic, mathematics, and political economy with the same energy. In addition to his own studies, Mill also tutored his brothers and sisters for three hours daily. Throughout his early years, Mill was treated as a younger equal by his father's friends, who were among the greatest intellectuals in England.

Only later did Mill realize that he never had a childhood. The most satisfying experiences he recalled from his boyhood were walks, music, reading Robinson Crusoe, and a year he spent in France. Before going abroad, Mill had never associated with anyone his own age. A year with Bentham's relatives in France gave young Mill a taste of normal family life and another language.

When he was sixteen, Mill began a debating society of utilitarians to discuss and make popular the ideas of his father, Bentham, and others. He also began to publish on various issues, writing nearly fifty articles and reviews before he was twenty. But in 1823, at his father's insistence, Mill cast off his interest in a political career and accepted a position at East India Company (a successful trading firm), where he remained for thirty-five years.

Thomas Carlyle (1795–1881) once described Mill's life as "the autobiography of a steam engine." Nonetheless, in 1826 Mill underwent a mental crisis. He felt empty of satisfaction even with all of his knowledge. Mill eventually overcame his depression by opening himself to poetry. When he was twenty-five, he met Harriet Taylor, and she became the most important influence of his life. Although she was married, they maintained a close relationship for twenty years, eventually marrying a few years after her husband's death.

The main purpose of Mill's philosophic works was to repair the British empirical (experimental) tradition extending from English philosopher John Locke (1632–1704). He overcame much of the confusion of Locke by distinguishing between the connotation, or understood meaning, of terms and the denotation, or real meaning. Mill understood logic as knowledge by inference (the act of transferring a meaning from one thing to another).

Mill's logic concludes with an analysis of the methods of the social sciences. However, the variety of conditioning factors and the lack of control and repeatability of experiments weaken the effectiveness of both the experimental method and deductive (coming to a conclusion by reasoning) attempts. The proper method of the social sciences is a mixture: deductions from the inferential understandings provided by both psychology (study of the mind) and sociology (study of society and groups).

Mill suggested that there are higher pleasures and that men should be educated to these higher dreams, for a democratic government based on agreement is only as good as the education and tolerance of its citizenry. This argument is put forth in Mill's famous essay, "On Liberty." Therein the classic formula of liberalism (political philosophy believing in progress, individual freedom, and protection of rights) is stated: the state exists for man, and hence the only justifiable interference upon personal liberty is "self-protection."

The great sadness of Mill's later years was the unexpected death of his wife in 1858. He took a house in Avignon, France, in order to be near her grave and divided his time between there and London. He won election to the House of Commons in 1865, although he refused to campaign. He died on May 8, 1873.