Hattie McDaniel's portrayal of the "mammy" figure in the film Gone with the Wind, for which she received an Academy Award for best supporting actress in 1940, is still widely seen as a role that could only have been played by her. She was the first African American to receive an Oscar.

Hattie McDaniel was born on June 10, 1895, in Wichita, Kansas, the youngest of thirteen children in a family of performers. Her father, Henry McDaniel, was a Baptist minister, carpenter, banjo player, and minstrel showman, eventually organizing his own family into a minstrel troupe. Henry married a gospel singer named Susan Holbert in 1875 and moved their growing family to Denver, Colorado, in 1901.

Hattie was one of only two black children in her elementary school class in Denver. Racial prejudice (an unfair judgment based on race) was less hostile in the West than elsewhere in the United States. For her talents as a singer and reciter of poetry, McDaniel became something of a favorite at the 24th Street Elementary School, where mainly white students attended. McDaniel sang at church, at school, and at home; she sang so continuously that her mother reportedly bribed her into silence with spare change. Before long she was also singing in professional minstrel shows, as well as dancing, performing humorous skits, and later writing her own songs.

In 1910 Hattie left school in her sophomore year at East Denver High School and became a full-time minstrel performer, traveling the western states with her father's show and several other troupes. The minstrel shows were usually performed by black actors, but were also sometimes performed 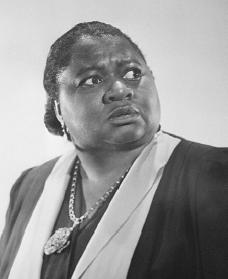 Hattie McDaniel.
Courtesy of the
Library of Congress
.
by whites in blackface. The shows presented a variety of entertainment that poked fun at black cultural life for the enjoyment of mostly white audiences.

Broke into radio and film

McDaniel's first marriage ended brutally in 1922, when her husband of three months, George Langford, was reportedly killed by gunfire. Her career was much better, including a first radio performance in 1925 on Denver's KOA station. McDaniel was one of the first black women to be heard on American radio.

In 1929 McDaniel was left without a job due to the Great Depression (a time in the late 1920s and 1930s of economic hardship that resulted in unemployment for many), so she went to Milwaukee, Wisconsin, and found work at Sam Pick's Club Madrid—as a bathroom attendant. Eventually she became a performer there and remained at the Club Madrid for about a year. Next she went to Hollywood, California, where her brother and sister lived. Sam and Etta McDaniel had already played small roles in a number of motion pictures. Sam McDaniel had a regular part on the KNX (Los Angeles, California) radio show "The Optimistic Do-Nuts" and was able to get Hattie a small part, which she promptly turned into a big opportunity. McDaniel eventually became a hit with the show's listeners.

A big break came for McDaniel in 1934, when she was cast in the Fox production of Judge Priest. In this picture McDaniel was given the opportunity to sing a duet with Will Rogers (1879–1935), the well-known American humorist. Her performance was well received by the press and her fellow actors alike.

In 1935 McDaniel played "Mom Beck" in The Little Colonel. A number of African American journalists objected to Hattie's performance in the film. They charged that the character of Mom Beck, a happy black servant in the Old South, implied that black people might have been happier as slaves than they were as free individuals. This movie marked the beginning of McDaniel's long feud with the more progressive elements of the African American community.

Won Oscar for Gone with the Wind

Once established in Hollywood, McDaniel found no shortage of work. In 1936 alone she appeared in twelve films. For the decade as a whole her performances numbered about forty—nearly all of them in the role of maid or cook to a white household. McDaniel won the role of "Mammy" in Gone with the Wind over several rivals. Her salary for Gone with the Wind was to be $450 a week, which was much more than what her real-life counterparts could hope to earn.

McDaniel's performance as Mammy in Gone with the Wind was more than a bit part. It so impressed the Academy of Motion Picture Arts and Sciences that she was awarded the 1940 Oscar for best supporting actress, the first ever won by an African American. McDaniel's award-winning performance was generally seen by the black press as a symbol of progress for African Americans, although some members of the National Association for the Advancement of Colored People (NAACP) were still displeased with her work. At the least, her Oscar was a symbol of possible conciliation (the act of settling a dispute) between the races.

McDaniel spent much of 1940 touring the country as Mammy, and in the following year she appeared in three substantial film roles, earning no less than $31,000 for her efforts. She was married, for a third time, to James L. Crawford in 1941.

The mid-1940s brought trying times for McDaniel, who experienced a heart-wrenching false pregnancy in 1944 and soon after became the victim of racist-inspired legal problems. The actress found herself in a legal battle over a system in Los Angeles that limited the land and home ownership rights of African Americans. Having purchased a house in 1942, McDaniel faced the possibility of being thrown out of her home. She was one of several black entertainers who challenged the racist system in court, however, and won.

Still, throughout the 1940s a growing number of activists viewed McDaniel and all she represented as damaging to the budding fight for civil rights. NAACP president Walter White pressed both actors and studios to stop making films that tended to ridicule black people, and he singled out the roles of Hattie McDaniel as particularly offensive. In response McDaniel defended her right to choose whichever roles she saw fit, adding that many of her screen roles had shown themselves to be more than equal to that of their white employers.

By the late 1940s McDaniel found herself in a difficult position. She found her screen opportunities disappearing even as she suffered insults from progressive blacks. After her third marriage ended in divorce in 1945, she became increasingly depressed and confused as to her proper path.

McDaniel could still use her vocal talent on radio. In 1947 she won the starring role of "Beulah" on The Beulah Show, a CBS radio show about a black maid and the white family for whom she worked. When Hattie McDaniel took over the role as Beulah, she became the first black performer to star in a radio program intended for a general audience. The program was generally praised by the NAACP and the Urban League, along with the twenty million other Americans who listened to it every evening at the height of its popularity in 1950.

McDaniel's last marriage, to an interior decorator named Larry Williams, lasted only a few months. In 1951 she suffered a heart attack while filming the first few segments of a projected television version of The Beulah Show. By summer she was diagnosed with breast cancer. McDaniel died in Hollywood, California, on October 26, 1952. She will always be remembered as Mammy of Gone with the Wind.

i would like to know more about hattie mcdaniel. she seems like a very inspiring person. i would love to have met her. i am very intrested in her.
2
Ivy

I would love to hear some songs sung by Ms McDaniel. Any idea where I can purchase some of her music? Black, white, red or yellow, she done a great job acting as Mammy in Gone With the Wind.