Joseph McCarthy, a U.S. senator from Wisconsin, became a national figure in a highly publicized pursuit of a Communist "conspiracy." Because of him, the term McCarthyism became a synonym for a public "witch-hunt" intended to destroy the victim's political standing and public character.

Joseph McCarthy was born on November 14, 1908, on a farm in Grand Chute, Wisconsin. The family was part of the Irish Settlement, a small group surrounded by farmers mainly of German and Dutch descent. His parents were devoted Catholics, literate but uneducated. The fifth of nine children, Joseph seems to have grown up shy and awkward, often rejected by his peers but favored by a protective mother. At the age of fourteen, after finishing grade school, he took up chicken farming, at which he was briefly successful.

McCarthy moved to the nearby town of Manawa and managed a grocery store. When he was almost twenty he enrolled in high school, graduating in only a single year. After two years as an engineering student at Marquette University, he went to law school and was president of his class. Soon afterward, McCarthy was admitted to the bar, an association for practicing lawyers.

In 1935 McCarthy tried practicing law in several Wisconsin towns, earning a reputation as a fierce gambler along the way. He also began playing the game of politics. After an unsuccessful bid as Democratic candidate for district attorney, he shifted his focus and became the Republican candidate for circuit court judge. He won, and at the age of twenty-nine he became the state's youngest circuit court judge. This victory also hinted at his later methods: He had lied in his campaign literature about his opponent's age (adding seven years to it) and about his own (moving his birth date back). By now, his basic personality was well shaped—clever and ambitious but lacking moral judgment, or the ability to distinguish between right and wrong.

During World War II (1939–45; a war involving many countries in the world in which the United States participated from 1941 until the end of the war), McCarthy served with the U.S. Marines as a ground officer in the Pacific. He took part in many battles and won several medals for "courageous devotion" while on duty. In 1944, while still in the Marines, his friends in Wisconsin put him on the ballot for the U.S. Senate. He lost the election but placed second and earned more than a hundred thousand votes. Soon afterward McCarthy left the Marines. 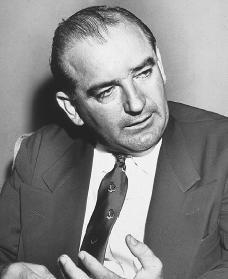 In 1945, after returning to Wisconsin, he was reelected as circuit court judge. A year later he ran for senator against Robert M. La Follette (1895–1953) and won. McCarthy had been a poor judge, being involved in at least one suspicious case. He had altered his war record to make it look more heroic, and he again cut moral corners in his campaigning. But he was a fitting candidate for the particular mood and cultural mix of Wisconsin at the time.

McCarthy's first years in the Senate were thoroughly average and at least slightly dishonorable. As a number of his past adventures, including some questionable tax returns, began catching up with him, he needed an issue that would distract attention from his affairs. On January 7, 1950, he asked three dinner companions to suggest an issue he could base his campaign on. They suggested communism, a political system in which property and goods are owned by the government and distributed among the people. The timing was perfect, as many in the changing nation feared the presence of communists living among them. Communism would give McCarthy a target. Now he needed to rally support.

In a speech in Wheeling, West Virginia, on February 9, 1950, McCarthy claimed to have in hand a list of 205 people in the State Department known to be members of the American Communist Party. In later speeches and interviews he kept changing the figures, depending on his audience and his mood. On February 20 he held the Senate floor for six hours in a stormy session in which other senators tried to get solid facts from him.

In the 1950 elections McCarthy secured the defeat of several Democratic senators who had dared question and oppose him. He spread terror even among his peers. His fellow Republicans were torn between fear of his skill and willingness to use his attacks on President Harry Truman (1884–1972), Secretary of State Dean Acheson (1893–1971), and former Secretary of State George Marshall (1880–1959).

Takes on the army

In 1952 McCarthy was reelected. He then used his investigative subcommittee as his point of support. He also used the press and television as his playing field. He even tried to develop a counterintelligence unit of his own inside the administration's agencies. McCarthy finally turned his aim on the army in the Fort Monmouth hearings.

The Army-McCarthy televised hearings ran from April 22 to June 17, 1954, and turned the tables on McCarthy and his committee counsel, Roy Cohn (1927–1986). Evidence proved that they had sought special favors for G. David Schine (1927–1996), a subcommittee staff member, as an army inductee (a person who signs up for training or service in the military). It is hard to guess why McCarthy attacked the army, when he must have known that his anti-Communist views could not stand a chance against the distinguished army officers. The intense response of the army's legal representative, Joseph Welch (1890–1960), to McCarthy's attack on a member of Welch's firm marked the end.

In December the Senate passed a vote of censure, or an official disapproval, on McCarthy. He died three years later, on May 2, 1957, a broken man whose end had really come at the army hearing, when the nation recoiled from him and his power to inspire terror was halted.

Scholars have debated whether McCarthy's views expressed a basic appeal to the majority of Americans. He was often called a fascist, or one who seeks complete control, by liberals and the left. His support came mainly from a desperate group on the right (conservatives) who saw their world threatened by a mysterious conspiracy and were willing to see extreme methods used against it.

McCarthyism came into the nation's history at a moment when Americans were uncertain about their future in a changing world. McCarthy gave this fear the name of communism. He turned communism into a simple target for their hostility. He also came at a time when the cold war and the nuclear arms race had brought on a need for secrecy that led to a paranoid feeling of being surrounded by enemies within.