During the twenty-one seasons in his major league career, Willie Mays hit more than six hundred home runs. Besides being a solid hitter, Mays also has been called the game's finest defensive outfielder ever and perhaps its best baserunner as well.

William Howard Mays Jr. was born on May 6, 1931, in Westfield, Alabama, the son of a steelworker who played center field for the local Birmingham Industrial League semi-pro (a professional league independent of Major League Baseball) team. Mays's mother, Ann, had been a high school track star, and it was clear from a very early age that Willie had inherited his parents' athletic gifts. According to his father, William Howard Mays Sr., young Willie learned to walk at the age of six months, and soon thereafter the two center fielders were playing catch with each other, father instructing son in the basics of the game that would one day make him famous.

The parents of Willie Mays were divorced when he was only three, but Willie continued to live with his father, which meant that he continued to play baseball. It was not long before Mays realized that baseball offered him a way out of the steel mills, and he later admitted that when given the choice he always preferred playing ball to doing school-work. Not only did Mays play ball constantly, he would sit in the dugout with his father's Industrial League teammates and listen to baseball strategy and technique, absorbing the game's finer points and learning to be at his ease in a competitive environment. By the age of thirteen, he was playing on a semi-professional team called the Gray Sox.

So gifted was Mays as a teenager that he began playing for the Birmingham Black Barons, the local entry in the Negro Leagues, which was then the major leagues for African American players. Playing center field, Mays was paid a salary of $250 a month to play with the Black Barons, far more money than he could have earned at part-time jobs. He eventually finished high school, but he did so as a professional baseball player.

By the time Mays had secured for himself the center fielder's spot on the Black Barons, legendary ballplayer Jackie Robinson (1919–1972) had broken the color barrier in major league baseball (African Americans were not allowed to play in the major leagues until Robinson joined the Brooklyn Dodgers in 1947), and the Negro Leagues were being scouted heavily by the newly integrated (consisting of players of all races) professional teams. One such scout for the New York Giants came to a Black Barons game to watch a teammate of Mays, but it was Willie Mays who captured his attention; the scout raved to his supervisors in the Giants' organization about him. The Giants had already signed a number of black baseball players, and it was not long before they offered Mays a $4000 bonus and $250-a-month salary to play for their minor league team (team controlled by a major league club to develop the talent of its players) in Iowa.

The talk of New York

Through the 1950 and the beginning of the 1951 season Mays tore through the minor leagues and was promoted to the Minneapolis Millers, a AAA club, the last stop before the major leagues. Mays's success was highly unusual at the AAA level, and his name quickly became familiar to Leo Durocher (1905–1991), the manager of the New York Giants. The Giants were suffering through a poor season in 1951, and Durocher saw no reason to delay the elevation of Mays to the major league level. On May 25, 1951, Mays became the starting center fielder and number-three hitter in the New York Giants' lineup.

By mid-August of the 1951 season, neither the Giants nor their young star appeared to be going anywhere. Mays showed flashes of brilliance but he was still only a rookie, and the Giants remained thirteen and one-half games behind the Brooklyn Dodgers in the National League pennant race. The Giants went on to sweep a three game series with the Dodgers, however, and after winning sixteen games in a row they managed to catch their rivals on the last day of the regular season to force a play-off—three games that would decide the winner of the league championship. In one of the most famous episodes in baseball history, the Giants won the third and deciding game of the play-off. In the World Series, the Giants faced their crosstown rivals, the New York Yankees, and after a fine series the Giants lost in seven games. In recognition of his 20 home runs and .274 batting average during the season Mays was named the National League's Rookie of the Year for 1951.

After a stint in the U.S. Army, Mays returned in 1954, when he led the Giants to a world championship while hitting .345, with 41 home runs, and winning the Most Valuable Player (MVP) Award. Mays led the league in batting average, and in the first game of the World Series he made an 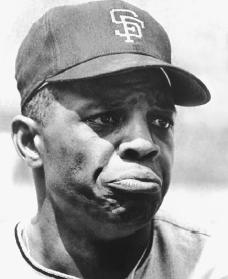 Mays.
Reproduced by permission of
Archive Photos, Inc.
over-the-shoulder catch of such remarkable skill that it has ever since been known simply as "The Catch." Giants' management rewarded Mays with a fat new contract, and he entered the 1955 season as a superstar.

It should not be forgotten that 1954 was Mays's first full season in the big leagues. What is especially remarkable is that the promise shown by his 1954 season would later be confirmed in season after season of excellence, beginning with the 51 homers he clubbed in 1955.

After the 1957 season the Giants left New York for San Francisco, where Mays found it difficult to fit in. Mays eventually learned the tricks of life out west, however, winning over the fans with his routine brilliance on the field and with the bat. In 1962 he led the Giants back to the World Series with a career-high 141 runs batted in; and in the following year he joined an exclusive club by smashing his 400th career homer. It seemed possible that Mays might one day catch Babe Ruth as the all-time leader in home runs.

The only question remaining for Mays was Babe Ruth's (1895–1948) record of 714 career home runs. Mays passed the records of many of the game's all-time greats until at last he trailed only the Babe, by 170 home runs. Mays's many years of continuous effort had taken their toll, however, and after the 1966 season his home runs and batting average both began to drop. But by the time he wound up his career with the New York Mets in 1973, he had made a strong case for himself as the greatest all-around player in baseball history.

The record of his accomplishments is long—the combination of his twenty-four straight All Star Game appearances, his more than 3,000 career base hits, and his first-year election to the baseball Hall of Fame with 94.6 percent of the possible votes was unparalleled—but Mays is remembered as much for the wonderful effortlessness of his play as for the numbers he racked up.