Mary, Queen of Scots was queen of France and Scotland. She was also a claimant (someone who has a legal claim to be the lawful ruler) to the throne of England. She represented a great hope to Catholics in England who wanted a Catholic ruler on the throne. This hope failed when Mary was unable to unseat her cousin and rival, Elizabeth I (1533–1603), the Protestant English queen.

The relations of England, Scotland, and France in the mid-sixteenth century were strongly based on religious loyalties and conflicts. Protestant rulers prevailed in England, while the Catholic powers of France and Scotland became allies.

Mary Stuart (the future Mary, Queen of Scots) was the third child of King James V (1512–1542) and Mary of Guise, the rulers of Scotland. Both of her brothers had died before she was born at Linlithgow Palace in Linlithgow, Scotland, in December of 1542. Her father died only a week after her birth, and the infant princess became Mary, Queen of Scots. The period following the death of James V was an unhappy one for Scotland. In 1547 an English invasion led to the military occupation of the country. One of the chief results of this action was Scotland's tighter alliance with France. As a result, when Mary was five, the Scottish court arranged for her marriage to the four-yearold dauphin (heir to the throne) of France, the future King Francis II. She was sent to France immediately.

In France, Mary grew up with her future husband. The two children became close friends, though she was the more outgoing and energetic of the two. Mary was educated with the dauphin and the other French royal children. She appears to have been a quick and able student whose charming personality had a great impact on all around her.

Meanwhile, Mary's home country of Scotland was under heavy French influence. Mary's mother, Mary of Guise, was appointed regent (the title given to someone who rules when the legal king or queen is absent, too young, or too ill to take the throne). Her government placed many Frenchmen in positions of power. Encouraged by Protestants in that country, a feeling of resentment against the French grew in Scotland.

In April 1558, at age fifteen, Mary married Francis. In November of the same year the Queen of England, Mary Tudor, died. Mary Stuart made a claim to the English throne, basing the claim on the fact that she was the great-granddaughter of the English king Henry VII and on the grounds that Elizabeth had been declared illegitimate (the child of an unmarried couple).

Mary's claim had no effect, and Elizabeth became queen (taking the title Elizabeth I) without opposition in England. However, Mary and Francis assumed the royal titles of England and Ireland, calling themselves the rightful rulers of those countries. They continued to use these titles when they became the rulers of France in July 1559. After taking the throne, Mary's husband, Francis II, ruled in France for only a little over a year, dying in December 1560. In 1561, Mary returned to Scotland, attempting to reassert her power there. Protestants had gained power in Scotland while Mary was absent, but she intended to renew Catholic influence in her county.

Elizabeth I's policy toward Mary was confusing. She saw that Mary was a threat, but she was unwilling to question the authority of another legitimate ruler (a king or queen who has a clear legal claim to the throne). Her policy shifted between attacking Mary when she was strong and aiding her when she was weak. For some seven years Mary held her position as queen of Scotland, but her permanent success in this position was unlikely, since Mary was clearly in conflict with important elements in Scotland.

In July 1565 Mary married for political purposes, rather than love. Mary became the wife of Henry, Lord Darnley, a move which strengthened her claims as heir to the throne of England, since Darnley was related to the English royal line. However, the marriage had somewhat different political results from those Mary hoped for. The Protestant lords of Scotland rebelled, led by the Earl of Moray and with support from Queen Elizabeth.

Mary was able to halt this threat by military force, but she could not prevent the harm done by the unpleasant personality of Darnley himself. She turned for comfort to her Italian secretary, David Riccio. Darnley, in turn, formed an alliance with the Protestant lords. On March 9, 1566, Darnley and the nobles dragged Riccio from Mary's room and murdered him. Within a short period, Moray and the other exiled rebel leaders had returned. 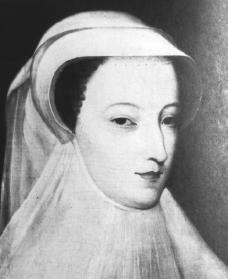 Though Mary gave birth to a son (the later James VI of Scotland and James I of England) in June 1566, she was never close to Darnley again. Instead, she secretly became close to one of the Protestant lords, the Earl of Bothwell. In February 1567 Darnley was murdered when the house in which he had been staying was destroyed by a violent explosion, and evidence suggested that Mary and Bothwell had plotted Darnley's death.

Suspicions against Mary were strengthened when she did little to investigate the murder, allowed herself to be kidnapped by Bothwell, and then married him in May 1567. The events led to a Scottish civil war, during which Mary was captured and forced to abdicate (give up the throne). After close to a year of confinement, she escaped and once again raised a group of supporters. After these supporters were defeated at the Battle of Langside (May 13, 1568), Mary crossed the border into England on May 16, 1568. She was now a refugee from the Scotland she had tried to rule.

Mary's move had placed Elizabeth in an awkward position. Elizabeth was not in favor of having the Catholic claimant to the English throne so close. But she also did not want to use English military force against the Scottish Protestants on Mary's behalf, and she did not wish Mary to take refuge in some Catholic court in another country. Elizabeth was also troubled by her own feelings about the divine nature of a monarch (the belief that a legitimate king or queen's power was a "divine right" to rule given by God). If Mary could be robbed of her divine right to rule, that seemed to suggest that Elizabeth could be removed from the throne by force as well.

Elizabeth decided, in a sense, to sit in judgment on Mary's case. A English commission met and ruled that the rebel government of Moray in Scotland was to remain in place for the time being, and that Mary was to remain in England.

Mary lived in England for the rest of her life and was virtually a prisoner there. Soon after her arrival, she became the center of Catholic plots to unseat Elizabeth. Although she was closely watched by the authorities, she continued to plan with her Catholic allies to escape and take the English throne. In some cases Mary played a direct part in these plans; in others she was simply the cause for which the rebels gathered. However, in 1586 the English government uncovered the details of yet another plot, with evidence that included a letter from Mary that consented to the assassination (murder) of Elizabeth. Orders were given for Mary's trial, and she was found guilty in October 1586.

Parliament (the English houses of government) demanded Mary's execution, and she was put to death on February 8, 1587. Although Elizabeth seemed greatly displeased by this event in public, realistically she knew that the action was necessary. With Mary's death, the center of Catholic plotting against Elizabeth was removed.

Also read article about Mary, Queen of Scots from Wikipedia

I researched my husband's family tree & found that he is related to Mary, Queen of Scots. I am related to Francis, her first husband.
2
Cristal

Maryellen, to answer your question about Bloody Mary. No this did not refer to Mary Queen of Scots. This nickname was given to Queen Elizabeth I older half sister by her father King Henry the VIII who was also named Mary. She was actually crowned Queen before Elizabeth. Elizabeth took her place upon her half sisters premature death. Queen Mary of England (Elizabeth's half sister) was a Catholic while Elizabeth was a Protestant. During Queen Mary of England's short reign she slaughtered my of her own countryman because they were Protestant. So many were killed that they started calling her Bloody Mary. Mary Queen of Scots was Bloody Mary aka Mary Queen of England's cousin.