Cotton Mather was a Puritan (a member of a group that broke away from the Church of England in the sixteenth and seventeenth century) preacher, historian (recorder of events and culture of the times), and the youngest man to graduate from Harvard College. Of the third generation of a New England founding family, he is popularly associated with the Salem witchcraft trials (1692–93; trials that took place in Salem, Massachusetts, in which nineteen women were accused, tried, and executed and several others imprisoned for what juries determined was witchcraft).

Born in Boston, Massachusetts, on March 19, 1663, Cotton Mather was the eldest son of Increase and Maria Mather and the grandson of Richard Mather, the first minister of Dorchester, Massachusetts, and of John Cotton, probably the most learned of first-generation American theologians (a specialist in the study of faith and religion). Cotton's father, Increase Mather, was minister to the Second Church in Boston, agent of the colony to England, and nonresident president of Harvard College from 1685 to 1701. Cotton knew he was expected by both his parents to follow in his father's footsteps. That tall order prompted him to be a very serious child whose fear of failing showed up in a stutter when he spoke. It took Cotton years of practice and prayer to overcome this speech problem.

Cotton Mather, having made remarkable progress under his father's training, was admitted to Harvard College at the age of twelve. He had begun studying Hebrew and showed great interest in philosophy (the study of knowledge) 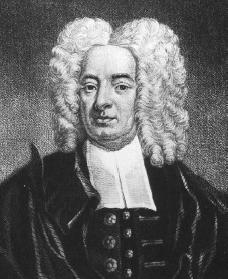 Cotton Mather.
Courtesy of the
Library of Congress
.
and science. His father presented Mather's first degree at the age of sixteen. Mather soon took up the study of medicine and, as a young man, attended meetings organized by Increase for scientific experimentation and discussion. At nineteen he received his master's degree. He was made a fellow of Harvard College in 1690 and was involved in the affairs of the college throughout his life. One of his bitterest disappointments was that he was never asked to be its president.

Disappointment and grief marked Cotton Mather's life. In 1686 he married Abigail Philips; they had nine children. She died in 1702. In 1703 he married the widow Mrs. Elizabeth Hubbard; they had six children. She died in 1713. His last wife, Mrs. Lydia George, whom he married in 1715, went insane. Of his fifteen children, only six lived to adulthood and only two outlived him. Three widowed sisters depended largely on him, and he was burdened by severe money problems.

Anxiety and depression contributed to Mather's already impossibly high expectations of himself. But he was a deep thinker. When very young he began to read the Bible daily and to develop habits of prayer. His efforts to do good work and to achieve Christian attitudes lasted a lifetime. His early bitter criticisms of other churches later gave way to a spirit of acceptance. In 1685 Mather was ordained at the Second Church. He served as assistant minister until his father's death in 1723, when Mather became minister.

One of Massachusetts governor Sir William Phips's (1651–1695) first acts in office was the establishment of a court to try the suspected witches recently arrested at Salem, Massachusetts. Mather had attempted to show the reality of spirits (bodiless, but sometimes visible supernatural beings, ghosts), particularly evil spirits, in his study Memorable Providences, Relating to Witchcrafts and Possessions … (1689). Although he had urged strong punishment of the devil's work, he suggested much milder punishment than death for those found to be guilty of witchcraft (the use of magic). Mather's approach was both religious and scientific. He separated himself from the trials as such and in fact warned the judges against "spectral [ghostlike] evidences," but his advice went unheard. In his Magnalia Christi Americana (1702) Mather declared his disapproval of the methods used in the trials. But while they were going on, he had not entered public protest.

A combination of forces diminished Increase and Cotton Mather's influence. A new breed of more open-minded men gathered in the recently established Brattle Church. These, with others, made sure of the removal of Increase from the presidency of Harvard in 1701. The House of Representatives appointed Cotton president, but the voting members of the college overruled their action and passed him by. Cotton then directed his attention to Yale College. But when Yale's president resigned, Cotton, apparently, refused the invitation to replace him. This was Cotton's last opportunity for high office.

Although the Mathers maintained clear but hard attitudes toward many cultural and church changes, they were in the intellectual front line of the Colonies. Cotton regularly wrote letters to men of learning around the world. In 1710 he was awarded a doctorate of divinity (highest degree awarded for study of in this case Christianity) by the University of Glasgow (Scotland). In 1713 he had the great honor of being elected to the Royal Society of London. He and Increase were among the first in the Colonies to support vaccinations against smallpox (very contagious disease giving a person sores on the skin, usually fatal) and were threatened for so doing. With courage (even though a bomb was thrown through the window of Cotton's house), the Mathers, with Dr. Zabdiel Boylston (1679–1766), successfully put the project into effect.

Career as a writer

Despite unpopularity, Mather's activities continued. He wrote in seven languages and also mastered the Iroquois Indian language. In his lifetime three hundred eighty-two of his works were published. These took many forms: history, sermons, biography, fables, books of practical faith, religious and scientific essays, and poetry. Often very educational, his writing could also be straightforward and practical. Mather saw teaching as the main job of good writing.

In the Psalterium Americanum (1718) the talented Mather translated the Psalms and adapted them to music. His Bonifacius, or Essays To Do Good (1718) gave practical directions for personal faith. A very popular book, Benjamin Franklin (1706–1790) called it the work that most guided his youth.

Probably Mather's greatest work was his Magnalia Christi Americana (1702). Primarily a history of New England, it is composed from many of Mather's other writings. The seven sections tell of the settlement of New England, the lives of its governors and ministers, and the story of Harvard College and of the Congregational Church. The Magnalia provides a detailed statement of the Puritan mind.

Cotton Mather recorded the passing of an era. The Massachusetts Bay Colony had been an extreme, Bible-based community of "saints," whose existence as an example to the rest of the world was to be safeguarded till Christ's second coming. In Mather's lifetime the separation of church and state and the development of the frontier and of a society absorbed in business and profits made the people's interest in church lessen. American-born colonists turned to nature and to reason for the sources of their new identity.