Coretta Scott King was the wife of civil rights leader Martin Luther King Jr. (1929–1968). She has gained an international reputation as an advocate (someone that supports a cause) for civil rights, nonviolence, international peace, and equal rights for women.

Coretta Scott was born on April 27, 1927, in Perry County, Alabama. Her parents, Obadiah and Bernice Scott, were farmers. The Scott family had owned land in the area since the American Civil War (1861–65). Even though the Scotts were more successful than most African Americans in the area, life for them and their three children was difficult. Coretta, along with her mother and sister, tended the family garden and crops, fed the chickens and hogs, and milked the cows.

Scott's early schooling was affected by the system of segregation, which kept people of different races apart. She walked six miles a day to and from school while white students traveled by bus to schools with better facilities and teachers. After completing six grades at the elementary school that "did not do much to prepare" her, Scott enrolled in Lincoln High School in Marion, Alabama. Lincoln "was as good as any school, white or black, in the area," said Scott. She developed an interest in music at Lincoln and, with encouragement from her teachers, decided to pursue a career in it. 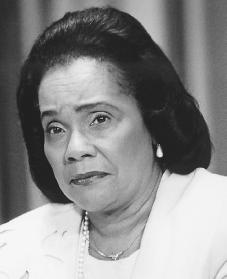 Coretta Scott King.
Reproduced by permission of
AP/Wide World Photos
.
high school class and won a scholarship to Antioch College in Yellow Springs, Ohio. Eager to leave the South, Scott enrolled at Antioch only to discover that racism (a dislike or disrespect of someone solely based on his or her race) was very much alive there also. Being the first African American to major in elementary education at Antioch created problems for her. Such a major required a two-year internship, or training period—one year teaching in the Antioch private elementary school and the other in the Ohio public schools. The year at the Antioch school, where Scott taught music, went well. The Yellow Springs school board, however, refused to allow Scott to teach in its school system because of her race. The student body was integrated, meaning that it contained both black and white students, but the faculty (teachers and members of the administrative staff) was all white. Scott was given the option of going to Xenia, Ohio, and teaching in an all-black school or remaining at the Antioch private school for a second year. She chose to stay at the Antioch school.

Discrimination (unequal treatment based on race) made Scott more determined than ever. She joined the National Association for the Advancement of Colored People (NAACP) as well as a race-relations committee and a civil liberties committee. She later said, "I was active on all of them. From the first, I had been determined to get ahead, not just for myself, but to do something for my people and for all people. I took to my heart the words of Horace Mann [1796–1859], 'Be ashamed to die until you have won some victory for humanity.'"

Scott's years at Antioch were rewarding despite her unfortunate teaching experience. Her time there renewed and strengthened the values of giving and sharing that she had learned at home and at Lincoln High School. She learned to work toward excellence, crediting the school with helping lead her to believe "that individuals as well as society could move toward the democratic ideal of brotherhood." At Antioch, Scott developed confidence that she could compete with "all people of all racial, ethnic and cultural backgrounds" on their terms or on her own. She claimed that "the total experience of Antioch" was an important element in preparing her for the role as wife of Martin Luther King Jr. and for her part in the civil rights movement (the organized effort to gain full equality for African Americans in the United States) he led.

While Coretta Scott was at Antioch she realized that she wanted to continue in music and to develop her voice to its fullest potential. She enrolled in the New England Conservatory in Boston, Massachusetts, graduating in 1954 with a bachelor's degree in music. It was in Boston that she met Martin Luther King Jr. They were married on June 18, 1953. Her decision to marry the young minister meant giving up her career as a performing concert musician.

In 1954 the Kings moved to Montgomery, Alabama, where they led the Dexter Avenue Baptist Church. It was in Montgomery that they were pushed into the leadership of the civil rights movement. Martin Luther King Jr. was recognized as the movement's leader, but Coretta Scott King was very much a part of it as well. She was actively involved in organizing and participating in the marches and boycotts (a form of protest in which organizers refuse to have dealings with a person, a store, or an organization until policies or positions are changed). She also gave "freedom concerts," in which she sang, read poetry, and gave lectures on the history of civil rights, to raise funds for the Southern Christian Leadership Conference (SCLC; an organization that was founded by Martin Luther King Jr. in 1957 to help local groups in their efforts to gain equality for African Americans) and for the civil rights movement. She also gave speeches all over the country, often standing in for her husband.

After the assassination of Martin Luther King Jr. in Memphis, Tennessee, on April 4, 1968, Coretta Scott King continued to work for the civil rights movement. Four days after the violent murder of her husband, the grieving widow and three of her four children returned to Memphis to lead the march Martin had organized. In June 1968 she spoke at the Poor People's Campaign in Washington, D.C., a rally her husband had been planning before his death. Then, in May 1969 she led a demonstration of striking hospital workers in Charleston, South Carolina.

In addition to her role in the civil rights movement, King was active in the peace movement. She called the Vietnam War (1955–75; a civil war in which U.S.-backed forces in South Vietnam fought against a takeover by forces from North Vietnam), "the most cruel and evil war in the history of mankind." In 1961 as a representative for the Women's Strike for Peace, she attended a seventeen-nation arms-reduction conference in Geneva, Switzerland. Later, King was concerned with full employment (or providing access to jobs for all people who are able to work). She testified in Washington in favor of the Humphrey-Hawkins Full Employment and Balanced Growth Act of 1978, which was aimed at reducing both unemployment and rates of price increases. She also supported equal rights and justice for women.

King also led and worked on several national committees and continued to serve on the board of directors of the SCLC. She was president of the Martin Luther King Jr. Center for Social Change, located in Atlanta, Georgia. The Kings' youngest son, Dexter Scott King (1961–), took over as leader of the King Center in 1995.

Coretta Scott King continues to work in support of world peace, full employment, and social justice. Furthermore, her commitment to nonviolence is as strong as ever.

Hello. Your site was a great help.You see, I needed information about Coretta Scott King (wife of Dr. Martin Luther King Jr.)to help me write a research paper for school. I will recomend this site to all of my friends for thier papers. Thank you again.
2
braelyn

you need more instreting facts about her life and for kids. but other than that your website was great that you so much for the helpful information. i very much APPRECIATE it. please take the tips that i have given you and use them wisley. i have plenty more tips where that came from.
3
madason

i would like say that coretta scott king was born in heliberger,alambama
4
De'Randa

i love your website. i had to do a history project and you site helped me so much. thank you so so much:)
5
raven heard

I liked the article it was good to learn abt Mrs.Scott biography. Her husband and her did al lot 4 us people 2. a