Encouraged by her parents

Billie Jean (Moffitt) King was born on November 22, 1943, in the southern California city of Long Beach. She was the first of Willard and Betty Moffitt's two children. Her father was an engineer for the fire department, and her mother was a receptionist at a medical center. Both she and her brother, Randy, who would become a professional baseball player, excelled in athletics as children and were encouraged by their parents. At fire department picnics, her father's coworkers always wanted Billie Jean to play on their softball team.

Billie Jean developed an interest in tennis at age eleven and saved money to buy her first racket. When she was fourteen years old she won her first championship in a southern California tournament. She began receiving coaching at age fifteen from Alice Marble, a famous player from the 1930s. The product of a working-class family, Billie Jean soon found herself caught up in a country club sport. Despite her success on the court, the fact that tennis was mainly geared toward men would prove a personal challenge to her in later years.

In 1961 Billie Jean competed in her first Wimbledon tournament in England. Although she was defeated in the women's singles, she teamed with Karen Hautze to win the doubles (two-person team) title. She married attorney Larry King in 1965. In 1966 she won her first Wimbledon singles championship and repeated in 1967. That same year she also won the U.S. Open singles title at Forest Hills, New York.

In 1968 King won both the women's singles and doubles titles at Wimbledon. In 1971 she became the first woman athlete to win more than one hundred thousand dollars 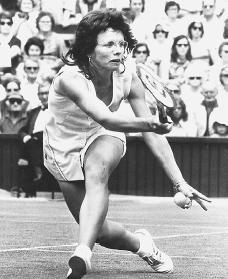 Billie Jean King.
Reproduced by permission of
Archive Photos, Inc.
in a single year. It was 1972, however, that would be King's banner year. She won the women's singles title at Wimbledon, the U.S. Open, and the French Open. (These three tournaments plus the Australian Open now make up the "Grand Slam" of tennis.) For this feat, Sports Illustrated magazine named her "Sportswoman of the Year," and Sports magazine deemed her "Tennis Player of the Year."

In 1973 King again won Wimbledon's singles and doubles championships. It was then that she began to openly criticize the low prize money offered to women competitors. She noted that women were receiving far less than men for what she considered equal ability and effort. Her statements on this issue led to the offer from a major U.S. drug manufacturer of a large sum of money to make the prize money at the U.S. Open equal for both men and women.

A victory for women's liberation

King's career coincided with the women's liberation (feminist) movement of the 1970s. Her working-class upbringing in southern California and the second-class treatment she received as a professional athlete made her a natural spokesperson for the movement. Her role as a leader in the feminist cause reached its peak in September 1973, when she faced the 1939 men's tennis champion Bobby Riggs (1918–1995) in a nationally televised match at the Astrodome in Houston, Texas. King easily beat the aging Riggs and emerged as the winner of what had been billed as the "Battle of the Sexes."

In 1975 King won her sixth Wimbledon singles championship, but she announced that she would no longer compete in major events because of injuries to her knees. In all she won a record twenty Wimbledon championships (including singles, doubles, and mixed doubles). Today, women competing in professional athletic contests owe much to Billie Jean King. With her outstanding play and forceful attitude, she earned them the right to compete for the same money as men.

King helped to found the Women's Tennis Association and served as its president from 1973 to 1975 and again from 1980 to 1981. After retiring from professional tennis in 1984, King and her husband have promoted coed (open to both men and women) team tennis. King has also been active in charitable events. In 1995 she joined the Virginia Slims legends tour along with Chris Evert (1954–) and Martina Navratilova (1956–) to raise money for the fight against acquired immune deficiency syndrome (AIDS; a disease that destroys the body's ability to fight off infection). King is also an investor in Discovery Zone, a chain of children's "play lands" that promotes the equal athletic abilities of boys and girls.

King continues to be associated with the sport as a broadcaster, teacher, and coach. In 1999 and 2000 she coached the U.S. women's team, whose members included Venus Williams, Serena Williams, Lindsay Davenport, and Jennifer Capriati, to victories in the international Federation Cup tournament.