The Soviet political leader Nikita Khrushchev was a major force in world politics in the second half of the twentieth century. His leadership played a key role in the 1960s during the height of the Cold War, a four-decade standoff between the United States and the Soviet Union. 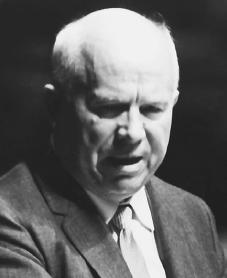 Nikita Sergeyevich Khrushchev was born in Kalinovka in southern Russia on April 17, 1894. As a child, Khrushchev attended a religious school where he learned to read and write. He also took a job taking care of cattle and continued until he was in his early teens. At the age of fifteen he became an apprentice (a student learning the trade) mechanic in Yuzovka, a growing town in the Ukraine, where his father was working as a miner. When his apprenticeship ended, he was employed as a machine repairman in coal mines of the region, where he worked for nearly a decade.

In 1918, at the age of twenty-four, Khrushchev joined the Communist Party, a political party that believes goods and services should be owned and distributed by the government. As a Communist, he enrolled in the Red Army to fight in the civil war then in progress. At the time, the Russian Revolution was storming the country. The Bolsheviks, led by Vladimir Lenin (1870–1924), were Communists that overthrew the czarist rule (rule by a czar, or king) of Russia. Communism took control of Russia in 1917. But not all of Russia agreed with the new government and soon civil war broke out between the Red Guards, who supported the Bolsheviks and the Whites, who opposed the new rule.

After nearly three years of service in the civil war, Khrushchev returned to Yuzovka and was appointed assistant manager of a mine. Soon thereafter, he entered the Donets Industrial Institute, a worker's school run by the Soviets, the new Communist ruling party. There he received additional instruction in the Communist Party. He became a political leader at school and was named the secretary of the school's Communist Party Committee. He graduated in 1925 and soon became a full-time party official as secretary of the Petrovsko-Mariinsk district of Yuzovka. There, he came to know Lazar M. Kaganovich, the secretary general of the Ukrainian Party's Central Committee and a close associate of future Soviet leader Joseph Stalin (1879–1953).

Khrushchev married in 1915, but his wife died during the famine (a severe shortage of food) which resulted from the civil war. In 1924 he remarried, this time to Nina Petrovna, a schoolteacher. The couple eventually had two children.

In 1929 Khrushchev attended the Industrial Academy in Moscow for training in industrial administration, leaving in 1931 to become secretary of a district party committee in Moscow. Within four years he became head of the party organization of Moscow, thus joining the highest ranks of party officials. There he used his industrial training as he helped to supervise the construction of the city's subway system.

When Stalin began eliminating those he mistrusted from the Communist Party's leadership, Khrushchev was fortunate to be one of the trusted. In 1938, when most of the chief party leaders in the Ukraine were gone, he was made first secretary of the Ukrainian Communist Party and at the same time was named to the Politburo, the ruling body of the Soviet Communist Party. As first secretary, he was in fact, though not in name, the chief executive of the Ukraine. Except for a short interval in 1947, he held on to his authority in that area until 1949.

During World War II (1939–45), where the Allies of Russia, America, and Great Britain fought the Axis of Germany, Japan, and Italy, Khrushchev served in the Red Army both in the Ukraine and in other southern parts of the former Soviet Union, and advanced to the rank of lieutenant general. He achieved all of this while still first secretary of the Ukrainian Communist Party.

In 1949 Khrushchev was summoned to Moscow to serve in the party's Secretariat, directed by Stalin. Then, after Stalin's death in 1953, Khrushchev was among the eight men in whose hands power became concentrated. In the distribution of the various spheres of power, the party was recognized as his sphere. Within a few months he became first secretary of the Central Committee of the Soviet Communist Party—that is, its chief official.

By installing his supporters in important party positions and making some critical political alliances, Khrushchev gained power over the seven who shared power with him and by 1955 he was clearly the foremost political figure in the Soviet Union. Even that important status was enhanced three years later, when he became chairman of the Council of Ministers, succeeding Nikolai Bulganin (1895–1975). With that, he became the most powerful man in the country—as chairman of the Council of Ministers, he was head of the government and, as first secretary of the Soviet Communist Party's Central Committee, he was head of the party.

Instead of looking to equal Stalin by becoming a dictator, or someone who possesses supreme power, Khrushchev encouraged the policy of de-Stalinization, which the government had been following since 1953, for the purpose of ending the worst practices of the Stalin dictatorship. Although the Soviet Union under Khrushchev continued to be a one-party totalitarian state, where one party had complete political power, its citizens enjoyed conditions more favorable than had been possible under Stalin. The standard of living rose, intellectual and artistic life became somewhat more free, and the authority of the political police was reduced. In addition, relations with the outside world were generally improved, and the Soviet reputation began to gain favor.

Meanwhile, the onset of the Cold War (1945–91) began to escalate in 1960, when Khrushchev broke off talks with President Dwight Eisenhower (1890–1969) after announcing an American spy plane had been shot down in the Soviet Union. Two years later, the United States and Soviet Union stood at the doorstep of nuclear war during the Cuban Missile Crisis in 1962, when America waited for Khrushchev to withdraw Soviet-owned nuclear arms from Cuba, the Soviet's Communist ally.

However, Khrushchev's fortunes in the Soviet Union eventually began to take a downward turn. Some of his ambitious economic projects failed and his handling of foreign affairs resulted in a number of setbacks. The de-Stalinization produced unrest in the Communist ranks of other countries. These developments caused concern among party leaders in the Soviet Union, many of them already fearful that Khrushchev might be planning to extend his power. In October 1964, Khrushchev was forced into retirement by other party leaders.

As a citizen, he lived a quiet life until his death on September 11, 1971, in Moscow. Although Khrushchev's legacy is still very much open to debate, no one can deny his attempts to de-Stalinize his nation that led to the improvement of everyday life in the Soviet Union.

he was one of the trusted that betrayed stalin and help poison stalin while he was asleep in his quarters. they changed body guards on stalin and changed doctors on him that were very inexperienced stalins original doctors were jewish doctors very smart and good at general practition. baria the secret police chief of russia was also involed in these dirty deeds to help dispose of joseph stalin to take control of the ussr at that time he and kruschev were in a power struggle for the soviet union state .stalin would humiliate thses men in drinking parties and asked them to dance for him for hours at a time they did not like these things.one of the body guards poisoned stalin while he was a sleep