B. B. King Biography

B. B. King is one of the most successful artists in the history of blues music. Today his ability as a blues guitarist remains unmatched.

Riley B. King was born on September 16, 1925, between Itta Bena and Indianola, Mississippi. His parents split up when he was a small child, and he lived for a few years with his mother in the Mississippi hills. She died when he was nine, and he was alone until his father, Albert King, found him a few years later. Working on a cotton plantation in Indianola, he earned $22.50 a week. "I guess the earliest sound of blues that I can remember was in the fields while people would be pickin' cotton or choppin' or somethin'." King noted in a 1988 Living Blues interview cited in Contemporary Musicians. "When I sing and play now I can hear those same sounds that I used to hear then as a kid."

King sang gospel music in church and even performed professionally with the Famous St. John Gospel Singers, but he was not allowed to sing the blues, which was considered "the devil's music." Still, he listened to recordings by early blues masters, especially Sonny Boy Williamson, on his aunt's record player. King's farm boss loaned him money to buy a guitar and sign up for music lessons, and King quickly developed as a blues player. Soon he was earning more singing and playing guitar on street corners on Saturday than he made all week on the plantation. King left Mississippi for Memphis, Tennessee, which promised the excitement and musical atmosphere he dreamed of. He settled there for good in 1948.

After serving briefly in the army, King moved in with his cousin Booker (Bukka) White, also a blues guitarist. King's attempts to copy Bukka's playing helped him develop his own style. He sought out Sonny Boy Williamson, who had a radio show on WDIA in West Memphis, and asked to play a song for him. Williamson was so impressed with King that he offered King his own radio show and a chance to play regularly at Miss Annie's 16th Street Grill. King was able to advertise his upcoming concerts on the radio, and soon he and his trio had become popular. Known on the radio as the "Beale Street Blues Boy," which was shortened to "Bee-Bee," and then to his famous initials, King decided he wanted to make records.

King was signed to Bullet Records and in 1949 recorded four songs at the radio station, including "Miss Martha King" and "I've Got the Blues." He also continued to perform in the area. Musician and talent scout Ike Turner (1931–) connected King with the Kent/Modern 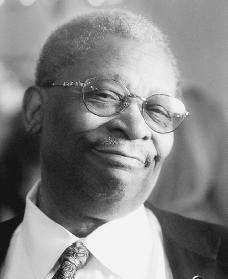 B. B. King.
Reproduced by permission of
AP/Wide World Photos
.
/RPM record label, and King's King's 1951 single for his new label, "Three O'Clock Blues," became a hit. He scored several other hits during these years, and by the mid-1950s he was playing about three hundred shows a year. He would maintain this schedule for over twenty years.

Once when King was playing at a dance in Twist, Arkansas, two men got into a fight and knocked over a heater, starting a fire that spread through the dancehall. King escaped the burning building, then remembered his sixty-dollar guitar and ran back in, nearly dying in an attempt to rescue it. When he discovered that the men who had started the blaze were fighting over a woman named Lucille, he gave the name to his guitar—"to remind myself never to do anything that foolish."

Although King distanced himself from rock and roll when the new style emerged in the 1950s, he soon began to add some of the traits of early rockers like Little Richard (1932–) and Fats Domino (1928–) to his act. In 1962 he moved to the ABC label, and in 1965 he put out his first album, Live at the Regal. In 1968, after the assassination of civil rights leader Martin Luther King Jr. (1929–1968), King played an all-night blues benefit with fellow guitarists Jimi Hendrix (1942–1970) and Buddy Guy (1936–) to raise money for King's Southern Christian Leadership Conference.

During the late 1960s, praise for King from English rock musicians such as Eric Clapton (1945–) and Jimmy Page (1944–) led to renewed interest in the blues among U.S. audiences. King found himself playing concerts with bands such as Led Zeppelin, Black Sabbath, and Santana. As African American audiences moved away from the blues, King began to attract young white listeners. In 1969 "The Thrill Is Gone" was released; the song won a Grammy in 1971 and became King's biggest hit. In 1971, with attorney F. Lee Bailey (1933–), King founded FAIRR (the Foundation for the Advancement of Inmate Rehabilitation and Recreation), an organization dedicated to the improvement of prison conditions. King often gave concerts in prisons, one of which was recorded and released as Live at San Quentin.

By the 1980s King was recognized as a blues legend. He won a 1984 Grammy for best traditional blues recording for Blues n' Jazz; he appeared on the album Rattle and Hum with the Irish rock band U2; and he received a Lifetime Achievement Award at the 1988 Grammy awards ceremony. In the early 1990s King was inducted into the Rock and Roll Hall of Fame, received a Presidential Medal of Freedom from George Bush (1924–), and even earned a star on Hollywood's Walk of Fame. Live at San Quentin, released in 1990, earned him another Grammy. He was also the owner of B. B. King's Blues Club and Restaurant on Beale Street in Memphis.

King has been married and divorced twice. He has fifteen children and has often expressed regret that his heavy touring schedule prevented him from being around to see them grow up. He was faced with a heartbreaking situation in 1992 when he played at a jail in Gainesville, Florida; among the inmates there was his daughter Patty, who was serving time on drug charges. By the time he reached his late sixties, King had slowed down his performance schedule somewhat, though he still toured regularly. In 1994 he played a concert at the Hard Rock Café in Beijing, China. He was by now playing Lucille the Fifteenth. "We've spent 40 years together," he said to Ebony. "She likes younger men but puts up with me."

In December 1995 King received the 18th annual Kennedy Center Honors presented by President Bill Clinton (1946–). King said of the event, "Anytime the most powerful man in the world takes 10 to 15 minutes to sit and talk with me, an old guy from Indianola, Mississippi, that's a memory imprinted in my head which forever will be there." In 2000 King was elected to the Mississippi Musicians Hall of Fame. The same year he received a Heroes Award from the National Academy of Recording Arts & Sciences. In February 2001 he won another Grammy in the traditional blues album category for Riding with the King, which he recorded with Eric Clapton.

Danchin, Sebastian. Blues Boy: The Life and Music of B. B. King. Jackson: University Press of Mississippi, 1998.

I am 46 years old and I can remember listening to Mr. King every since I was 5 years old. I haven't tired of B.B. King in all these years and doubt I ever will. I was raised between California, Arkansas, and Louisiana and every place I went my mother and father played B. B. King. My favorite song is the classic, "The Thrill Is Gone". It is a part of me as much as being black. It is what I know, what I grew up with and what I will die with. At family reunions or just jamming around the house by myself, I always play a few of B.B.'s songs. My children know B.B. King's music, as well as my grandchildren. I've seen Mr. King in concert several times and I had the thrill of my life. There is no other blues singer that means so much to me. I hope Mr. King is doing well and continues to sing his music with Lucille. He is like a fine wine. He just keeps better, better with time.
2
Dave Able

If his first name is Riley, what is his middle name (the initial B ?
3
pie

I grew up listening to B.B. King. My prayers go out to his family. He is a great legend that will not be forgotten. Mr. King you will be missed but always will have a place in my heart. Get your rest and the thrill is gone with your singing.

OMG! When I h I don't know what I will do if aneard that B.B. King had passed, I was devastated. I knew he was at his Las Vegas home, with hospice, from reading his posting and I had just said, on Wednesday that I don't know what I will do if anything happened to him. Well now it has and I am seriously in mourning. His blues have been my music since I was a teenager. I will is him terribly and have a lot of his music and will be buying any I don't have. I would give anything to attend his memorial services, whenever and wherever it is. R.I.P. Mr. King. No one will ever be able to feel your shoes or take your place!
7
Debbra White

Did BB KING have any brothers and sisters? And if so are any still living.
8
kemauria

RIP bother, BB King is 12 years older than i am. You can say i been knowing him all my life, I attend about 35% of his concerts
in the NS,& 50% of his concerts in Ca. You will be missed very much.Know one will be able to take your place.
10
Cassandra Whiting

I am very sad to here that Mr.King has passed. I remember seeing him in concert back in 1980, He was wonderful. At the end of the concert, I was able to say hello and shook his had. It was as though I had won the Lottery. I used to listen to my parents and uncles talk about him and his music. He also sang with Queen Latifah on one of her CD's I believe it was 2003 or 04. I will miss you B.B.King, I thank God that he shared you and your music with us. Rest In Peace. As you said with a song, "Nobody Loves Me But My Mother. But, I did too.
11
Theaola

I love B.B. King he is my favorite artist and such a handsome man. I met him some years ago in Dallas. He held my baby and put him to sleep. His kind voice was so sweet and his smile was that of a man with a heart of Christ. When he was singing "When the saints go marching in" I could feel his nearing and his sweet soul talking to God. My father's name was B.B. also. I will always miss you. You are a great man. Yes! you was around a long time singing the blues and I understand what you mean about the blues. Rest in peace Mr. King.