Though both blind and deaf, American lecturer and author Helen Keller (1880–1968) traveled the world over, fighting for improvement in the education and life of the physically handicapped.

Helen Adams Keller was born in Tuscumbia, Alabama, on June 27, 1880. Her parents were Captain Arthur H. Keller and Katherine Adams Keller. Her father was a veteran of the confederate army (army that fought to separate from the United States during the Civil War, which lasted from 1861 to 1865). He also was the editor of the local newspaper, the North Alabamian. Helen was born a normal child. She started speaking when she was six months old. By the time she was a year old, she was able to communicate with her parents and she had also learned to walk. When Helen was eighteen months old an illness developed that the doctor described as brain congestion. She ran a high fever for many days, and then the fever was gone. Helen was left deaf and blind from the illness. Helen became a very wild, unruly child. She would scream and kick when she was angry and giggle and laugh when happy. She developed many of her own signals to communicate her needs with her parents.

When Helen was six, her mother contacted Dr. Alexander Graham Bell (1847–1922), whom she had heard was working on devices to help the deaf. Bell met with Helen and her parents and suggested that they contact the Perkins Institute for the Blind in Boston, Massachusetts. In March 1887 Anne Sullivan (1866–1936), a teacher at the institute, came to serve as Helen's teacher. Anne was twenty-one years old and had sight limitations of her own. One month after her arrival, Sullivan had taught Keller the word "water." She did this by using her fingers to spell letters into Helen's hand. From this she understood that objects had names, and that her teacher spelled these names into her hand. This unlocked a whole new world of learning for Helen.

Anne Sullivan was with Helen day and night, constantly spelling into her hand the words and ideas of things going on around them. Helen was a quick learner. In only three years she learned the manual alphabet (sign language), the Braille alphabet (an alphabet created by Louis Braille [1809–1852] for the blind that relies on raised dots to communicate), and she could read and write.

Helen wanted to learn to speak, and in 1890 she began taking speech classes at the Horace Mann School for the Deaf in Boston. She worked diligently at learning to speak. After twenty-five years of hard work and practice, Helen was able to speak in a voice that others could understand.

From 1894 to 1896 Helen attended the Wright-Humason School for the Deaf. Here she continued to work on improving her communication, as well as her math, French, German, and geography. In this way Helen prepared herself for college and went on to Cambridge School for Young Ladies. Anne Sullivan attended every class with Helen and interpreted the lectures and books for her, as they were not in Braille. By the time she was sixteen, Keller had passed the admissions examinations for Radcliffe College; in 1904 she graduated cum laude (with honors). This was all done with the assistance of Anne Sullivan interpreting the lectures and texts. 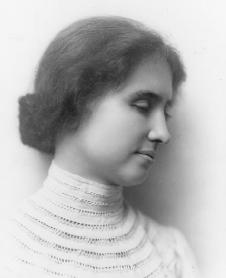 Helen Keller.
Courtesy of the
Library of Congress
.

Devotes life to helping others

As a young woman Keller became determined to learn about the world and to improve the lives of others. With insight, energy, and deep devotion to humanity, she lectured throughout the world, worked to forward her ideas in Congress, and wrote thousands of letters asking for contributions to finance efforts to improve the welfare of the blind. She visited hospitals and helped blind soldiers. She taught the blind to be courageous and to make their lives rich, productive, and beautiful for others and for themselves.

Sullivan served as Keller's counselor and companion. When Keller died in 1968 her name had become a worldwide symbol of what the human spirit can accomplish despite severe physical limitations.

I love Helen Keller so much, she was blind, deaf, and still had hope. I need to wear glasses and I can't imagine what life would be like without eye sight or hearing she's a global inspiration.
2
KELLYANN

I Love Helen Keller she really is an inspiration to all of us. Close your eyes and plug your ears now imagine your whole life like that. iTs heart breaking/
3
karneishia

Helen was a believer, she didnt let her disability stand in the way of being great.
5
Fatima

her life story is an inspiration on my life. it has a true meaning
7
Kayla

helen keller was a brave and inspiring women. i hava to do a project on her in my social studies class and i learned soo much about this wonderful women:)
8
frank

Helen killer is beloved in our hearts and will never be forgoing she was the best person who belived and didnt let that get in her way:) and for Annie:)
10
Mels

I Think That Helen is out going person who like to achieve big things. some day I want to do something as good as her.
12
maria

How did the name kelahan tne name of her business come about i have great a few great uncles from minnisota that were teachers in about fiur different places back when they were setteling in different areas when they would settle a town back in approx 1890,s they were well kniwn as the kelahan schools thought maybe distan relation my great grandmother was born sara kelahan
13
sanjeev kumar

Hellen was a brave girl. She struggle in her life and fight with her own life by which she got the great success in her life.
14
Reyes

What was Helen's best subject when she studied at the Wright-Humason School for the Deaf?
15
Priyanka

I love Hellen Keller ...and she is a real inspiration
16
Shruti Singh

I love helen Keller she really is an inspiration to all of us. Close your eyes and plug your ears now imagine your whole life like that it's heartbreaking.