The English Romantic poet John Keats stressed that man's quest for happiness and fulfillment is thwarted (prevented from taking place) by the sorrow and corruption inherent (existing as an essential characteristic) in human nature. His works are marked with rich imagery and melodic beauty.

John Keats was born in London, England, on October 31, 1795, the first of Thomas and Frances Keats's five children. Thomas was working as a stable manager for John Jennings when he met Jennings's daughter, Francis. Thomas, known for his charm, energy, and respectability, crossed the social barrier and won Francis's heart and the two were married. Both of John's parents were affectionate and loving toward their children. John especially shared a close relationship with his mother. His father died in an accident in 1804. His mother, after a second marriage and divorce, died from a lung disease in 1810.

In 1811 Keats became an apprentice (worked for someone to learn a trade with little or no pay) to an apothecary (druggist) in Edmonton, England. There Keats first tried his hand at writing and produced four stanzas (short poems) entitled "Imitation of Spenser." These were inspired by the poem "Fairie Queene" by Edmund Spenser (c. 1552–1599).

On October 2, 1815, Keats started medical studies at Guy's Hospital. He was a conscientious (careful) student, but poetry gained an increasing hold on his imagination. It is thought that Keats was influenced at this time by the boldness evident in a translation by George Chapman (c. 1559–1634) of the Odyssey by the Greek poet Homer (c. 850 B.C.E. ). His first volume of poems was published in March 1817.

Keats's next work, Endymion: A Poetic Romance, was published in May 1818. Keats turned the story of Endymion, a mythical shepherd, into an allegory (a narrative in which abstract ideas are represented by people) of the romantic longing to overcome the boundaries of ordinary human experience. Endymion realizes that ultimate identification with transcendence (rising above the universe) is to be achieved through humble acceptance of human limitations and of the misery built into man's condition. Keats's letters reveal that at this time several of his friends were ill. His brother was very unwell, and he himself, after a bad cold, prophetically (foretellingly) feared in October 1817 that "I shall never be again secure in Robustness (health and strength)."

In early 1818 Keats turned to straightforward narrative in Isabella, which is based on a story by Boccaccio (1313–1375). Its theme was connected with Keats's more philosophical (pertaining to inquiry concerning the source and nature of human knowledge) preoccupations—the beauty and greatness of tragic love. 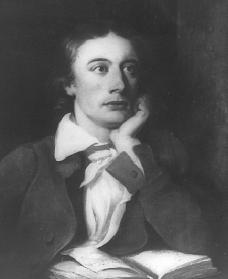 John Keats.
Courtesy of the
Library of Congress
.

Keats started work on Hyperion in September 1818. An essential part of its purpose was to describe the growth of the Greek god Apollo into a true poet through ever deeper acceptance and understanding of change and sorrow. But Keats was unable to get ahead with it for a number of reasons, including impaired health, negative reception of Endymion by an influential critic, and the death of his brother, Tom.

In spring 1819 Keats turned once more to verse narrative. He first produced the opulent "Eve of St. Agnes" in deliberate revulsion (extreme displeasure) against what he now saw as the "mawkish" (sickly sentimental) sentimentality of Isabella. This was followed by "La Belle Dame Sans Merci," a simple narrative poem that tells of the mysterious seduction of a medieval knight by another of Keats's elusive, enigmatic (mysterious), half-divine ladies. Each poem embodies an important trend in Keats's poetry, a longing mixed with fear and diffidence (lack of self-confidence) for some experience beyond human mortality.

These were followed in the spring and summer of 1819 by the first of his great odes: "Ode to Psyche," "Ode on a Grecian Urn," and "Ode to a Nightingale." These, together with the later "Ode on Indolence" and "Ode on Melancholy," are acutely imaginative explorations of the intricate (complex) relation between sorrow and bliss, life and dream.

During the latter half of 1819 Keats wrote his only drama, Otho the Great. He also made his last attempt to define the function of the poet in The Fall of Hyperion. However, like the earlier Hyperion, it was never completed and remains a tantalizing (fascinating) fragment of cryptic (mysterious) beauty.

Significantly, the last long poem that Keats wrote was Lamia. This is a brilliantly ambiguous (likely to be interpreted in more than one way) piece which leads to the conclusion that both the artist and the lover live on deceptive illusions (a world of the imagination not based on reality and likely to mislead). His third and last volume, Lamia, Isabella, The Eve of St. Agnes and Other Poems, was printed in July 1820.

In September 1820, although his health had been declining for some time, Keats left for Italy on an invitation from the poet Percy Bysshe Shelley (1792–1822). He died in Rome on February 23, 1821, at the age of twenty-five.

All of Keats's poetry is filled with a mysterious yet uplifting sense of beauty and joy. His works explore many possibilities but do not insist on any one answer to the enduring problems of life. The experience of life, not its perfect understanding, was Keats's major concern.