The Swiss psychologist and psychiatrist Carl Jung was one of the major forces responsible for bringing psychological (having to do with the mind and its processes) thought and its theories into the twentieth century.

Carl Gustav Jung was born on July 26, 1875, in Kesswil, Switzerland, the son of a Protestant minister. At the age of four, the family moved to Basel. When he was six years old, Carl went to the village school in Klein-Huningen. His father also started teaching him Latin at this time. During his childhood, Jung preferred to be left alone to play by himself. He was happiest when he was in isolation with his thoughts.

As Jung grew older, his keen interest in a large variety of sciences, and the history of religion made the choice of a career quite difficult. However, he finally decided on medicine, which he studied at the University of Basel (1895–1900). He received his medical degree from the University of Zurich in 1902. Later he studied psychology (the scientific study of the mind and its processes) in Paris, France.

In 1903 Jung married Emma Rauschenbach. She was his loyal companion and scientific coworker until her death in 1955. The couple had five children, and lived in Küsnacht on the Lake of Zurich.

Jung began his professional career in 1900 as an assistant to Eugen Bleuler (1857–1939) at the psychiatric clinic of the University of Zurich. During these years of his internship, Jung, with a few associates, worked out the so-called association experiment. This is a method of testing used to reveal affectively significant groups of ideas in the unconscious area of the psyche (the mind). These groups or "complexes" as Jung called them, would have a control over the affected person, and would encourage anxieties and inappropriate emotions.

When Jung read Sigmund Freud's (1856–1939) Interpretation of Dreams, he found his own ideas and observations to be basically confirmed and furthered. He sent his publication Studies in Word Association (1904) to Freud, and this was the beginning of their 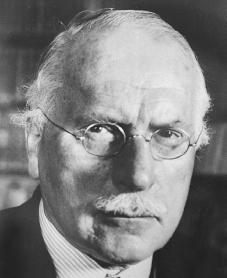 Carl Jung.
Courtesy of the
Library of Congress
.
work together, as well as their friendship, which lasted from 1907 to 1913. Jung was eager to explore the secrets of the unconscious psyche expressed by dreaming, fantasies, myths, fairy tales, superstition, and occultism (belief in supernatural powers or forces). But Freud had already worked out his theories about the basic cause of every psycho-neurosis (an emotional problem that becomes known through physical symptoms or through feelings of anxiety, depression, or fear) and also his belief that all the expressions of the unconscious (the part of the mind that is not a usual part of a person's awareness) are hidden wish fulfillments. Jung felt more and more that these theories were scientific presumptions (beliefs that are based on expected outcomes), which did not do full justice to the expressions of unconscious psychic life. For him the unconscious not only is a disturbing factor causing psychic illnesses but also is basically the source of man's creativeness and the roots of a person's consciousness. With such ideas Jung came increasingly into conflict with Freud, who regarded Jung's ideas as unscientific. Jung accused Freud of narrow-mindedness; Freud and his followers disapproved of Jung for his emphasis of the spiritual aspects of the psyche.

Jung was bothered by his break with Freud. He began a deepened self-analysis (an examination of oneself) in order to gain all the honesty and firmness for his own journey into discovering the mysteries of the unconscious psyche. During the years from 1913 to 1921 Jung published only three important papers: "Two Essays on Analytical Psychology" (1916, 1917) and "Psychological Types" (1921). The "Two Essays" provided the basic ideas from which his later work was developed. He described his research on psychological typology (the classification of personalities by studying their similarities and differences)—that there are two basic classifications, or "two types of personalities," in the way they relate to the world: introversion and extroversion. Introversion, in which one has the characteristic of being self-involved, withdrawn, occupied with one's "inner world." Extroversion, in which one relates to the world through social involvement and has interests outside of oneself and is "outgoing." He expressed the idea that it is the "personal equation" which, often unconsciously but in agreement with one's own typology, influences how an individual observes and interacts with their world.

Next to Jung's typology, his main contribution was his discovery that man's fantasy life has a certain structure. There must be subtle active centers in the unconscious which control natural behavior and free imagination. These combine to form Jung's concept of archetypes. An individual will dream on impulse, and these dreams will have a theme or story similar to a fairy tale, or a myth, from a time long past, that are unknown to the person dreaming. To Jung this meant that archetypal symptoms (memories of experiences of people from the past that are present in every person's unconscious mind) belong to human beings of all ages and from all times; they are the expression of a collective body of man's basic psychic nature. Many neurotic sufferings have happened due to a feeling of self-estrangement (the alienation of oneself from oneself) because of man's creation of a logical framework and control of his dependence on these "memories" of experiences that exist in the unconscious.

In order to study archetypal patterns and processes, Jung visited so-called primitive tribes. He lived among the Pueblo Indians of New Mexico and Arizona in 1924 and 1925 and among the inhabitants of Mt. Elgon in Kenya during 1925 and 1926. He later visited Egypt and India. To Jung, the religious symbols and phenomenology (a system of beliefs developed by studying peoples understanding and awareness of themselves) of Buddhism and Hinduism and the teachings of Zen Buddhism and Confucianism all expressed differentiated experiences on the way to man's inner world, a world which was badly neglected by Western civilization. Jung also searched for traditions in Western culture, which made up for its one-sided outgoing development toward reason and technology. He found these traditions in Gnosticism (belief that personal freedom comes through spiritual knowledge and understanding), Christian mysticism (the belief that instinct and spiritual feeling are the ways to find God), and, above all, occultism (knowledge or use of supernatural powers). Some of his major works are deep and clear psychological interpretations of alchemical (the ability and power to make common things special) writings, showing their living significance for understanding dreams and the hidden theme of neurotic and mental disorders.

Inner development and growth of personality

Of prime importance to Jung was the detailing of the stages of inner development and of the growth of the personality, which he termed the "process of individuation." He described a strong impulse from the unconscious to guide the individual toward its most complete uniqueness. This achievement is a lifelong task of trial and error and identifying and uniting contents of the unconscious. It consists in an ever-increasing self-knowledge and in "becoming what you are."

Jung lived for his explorations, his writings, and his psychological practice, which he had to give up in 1944 due to a severe heart attack. His career included the professorship of medical psychology at the University of Basel and the titular (title without the actual position) professorship of philosophy from 1933 until 1942 on the faculty of philosophical and political sciences of the Federal Institute of Technology in Zurich. In 1948 he founded the C. G. Jung Institute in Zurich. Honorary doctorates were given to him by many important universities all over the world. Carl Gustav Jung died in Küsnacht on June 6, 1961.